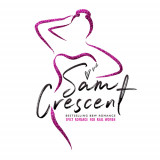 Published 2018-08-28.
When did you first start writing?
Since I was a kid. I've always loved telling stories and creating different characters and stories. When I actually started to write them all down was in 2009, as I couldn't stop thinking about them, and felt compelled to write them so they were no longer just day dreams.
What is the story behind your latest book?
Axton (Four Kings Empire) came to me with Taylor's words.

Ten years ago, the Four Kings killed my friend.
I’m not going to kill them.
I’m going to make every single one of them pay.
Make them pray for death, and take everything they’ve ever loved.
This is not revenge. This is justice.
Plain and simple.

That was how Axton started for me. The moment I started chapter one, and I felt Taylor's pain and her anger, but also her fear. I loved writing this story so much. How she wanted to exact justice that she didn't want to kill them, but see them all fall. Four powerful men because of the mistakes of their past, or is because of them? Also, the secrets that unraveled as I wrote it.
What is the greatest joy of writing to you?
Creating characters and romance. I'm addicted to romance so much.
What are your five favorite books and why?
This is really hard to chose, and these change all the time as well.

Shade by Jamie Begley - For me this has everything. To be honest, all of Jamie's books are amazing. This one is just, it blows my mind from the development of Shade and Lily, to the plot, and all the emotions in between.

Lawman by Diana Palmer - This book is all the feels for me. I love books where the hero has to grovel and earn back the love of the heroine. Diana Palmer has what I need and this was the first book I read by her.

All of Penelope Douglas - I can't pick one. That woman knows how to write.

Accidental Witness by Sam Mariano - This book gripped me from the start and fell in love with the baddie, Mateo.

All of Tijan, Tillie Cole, and so many others.

I think after this, it's safe to say, I don't have a favorite at all.
What is the first book that made you cry?
A Reluctant Dom by Tymber Dalton. It took me over three weeks to finish as each time I read it, I cried so badly.
Who's your book boyfriend or book crush?
I have so many. Shade (The Last Riders), Dash Chambers (Broken Love, 4), Mason (Fallen Crest series), Luca (Bound by Honor), and so many more.
What do you read for pleasure?
Everything and anything. I love dark romance, new adult, MC, young adult. So long as there's a romance, I will read it.
Describe your desk
It's large and rectangle lol. Okay, in all seriousness, it's a large wooden desk that faces a window overlooking my garden. I have a nice sized screen and keyboard on one side of the desk. The space at my right hand side is books, notebooks, and scraps of paper. I've got a pen holder and also a tiny pineapple teddy with the octopus from Finding Dory, and a figure of Beast and Sadness for company.
What is your writing Kryptonite?
Names! I really struggle with naming my characters. Sometimes it's harder than others but I have names that I love, which I seem to use often.
What are you currently working on?
It's new territory for me, my first ever first Point of View story. I've never wrote one before and it's all exciting. I'm loving it. Sorry, I don't like to give too much away.
What drives you to keep on writing?
The love of the written word. I'm addicted to it and I love romance. I have a passion for it. It's what I love to do above everything else. It even beats baking and cooking as well.
Smashwords Interviews are created by the profiled author or publisher. 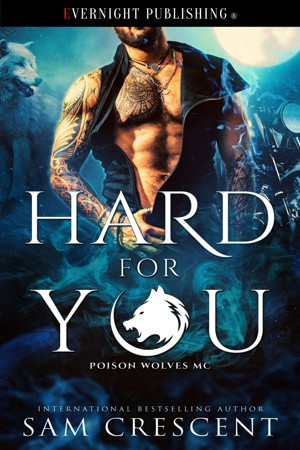 Hard for You by Sam Crescent
Series: Poison Wolves MC, Book 1. Pre-release—available October 11, 2022. Price: $3.99 USD. Words: 43,420. Language: English. Published by Evernight. Categories: Fiction » Romance » Suspense, Fiction » Romance » Paranormal » Shifters
Amelia isn’t liked by her pack. As a vegan, animal lover, and completely against violence, she doesn’t fit in with her fellow wolves. They’ve been trying to get her removed from the pack, but the Poison Wolves MC won’t allow it. Wolfe has wanted Amelia for some time. There’s just something about the sexy, curvy wolf that he can’t get out of his head. 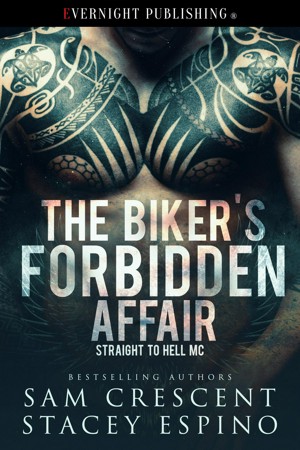 The Biker's Forbidden Affair by Sam Crescent & Stacey Espino
Series: Straight to Hell MC, Book 3. Pre-release—available October 4, 2022. Price: $3.99 USD. Words: 40,910. Language: English. Published by Evernight. Categories: Fiction » Romance » Contemporary
Tank's bigger and badder than most of the bikers at the Straight to Hell MC. He's used to being feared by everyone—then there's Bell. The curvy blonde waitress doesn't move out of his way. For some reason, she sees the best in him, never judging him for his past or present. Her sweet love and innocence become addicting. It's nice not being the monster for once. 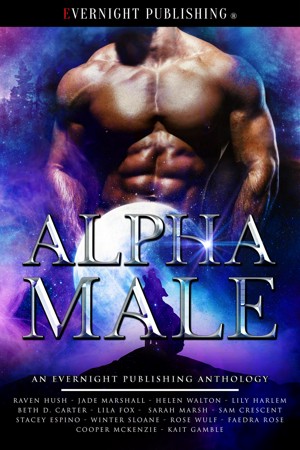 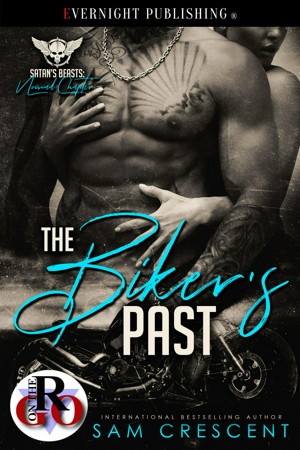 The Biker's Past by Sam Crescent
Series: Satan's Beasts MC: Nomad Chapter, Book 3. Price: $2.99 USD. Words: 16,660. Language: English. Published: September 27, 2022 by Evernight. Categories: Fiction » Romance » Contemporary
Every year, Bad leaves the club for a few short hours to take care of … something. Ten years ago, his best friend died in a driveby shooting, leaving Charity alone. Bad was told to stay away from her. She was his best friend’s little sister, and so, he did. He continued the path of joining the Nomad Chapter of the Satan’s Beasts MC, and lived his life on the road. Seeing Charity once a year. 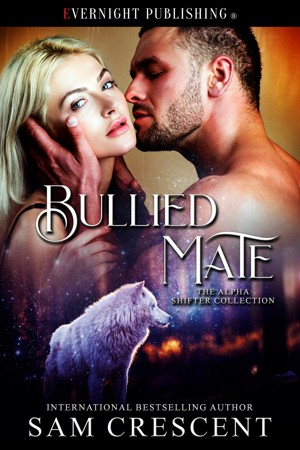 Bullied Mate by Sam Crescent
Series: The Alpha Shifter Collection. Price: $3.99 USD. Words: 36,390. Language: English. Published: September 6, 2022 by Evernight. Categories: Fiction » Romance » Paranormal » Shifters
Life is so unfair. The first time Poppy transitions, she finds out her mate is none other than Klaus freaking Demon, the alpha’s son. The guy who’s been secretly bullying her for years. If he thinks she’s going to fall for him, he’s wrong. Klaus apologizes, so what more does she want? They’re mates, and there’s no way she can deny this connection. 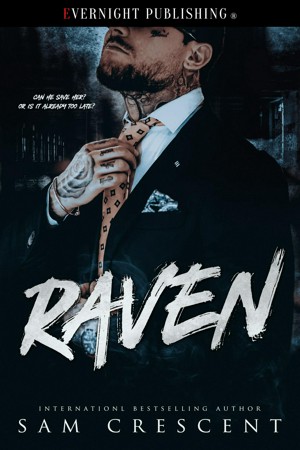 Raven by Sam Crescent
Series: Hell's Bastards MC, Book 3. Price: $4.99 USD. Words: 94,630. Language: English. Published: August 23, 2022 by Evernight. Categories: Fiction » Romance » Contemporary, Fiction » Romance » Suspense
The club is her life. For Raven, the Hell’s Bastards MC is her world. From the moment she meets Smokey, she’s able to build a life for herself. Being the only female member in an all-male club, she’s earned her patch and proved she has their backs. Now her place is in danger. Smokey is cleaning shop because of Ava. Raven watched each of the club whores leave—she’s next. 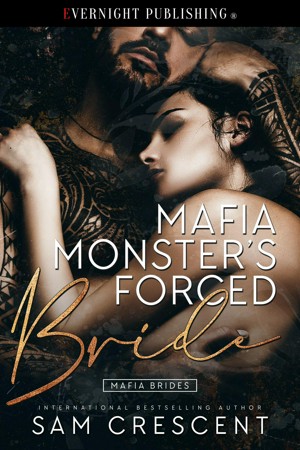 Alex Greco hates her husband. To keep the peace between her crime lord father and the Greco mafia’s boss, she’s forced to marry his son, Roman. He’s cold and has a reputation for hurting those close to him. There is no wedding night, and the first months of their marriage are awful. Roman doesn’t want a wife, and certainly not an outsider who doesn’t know their ways. 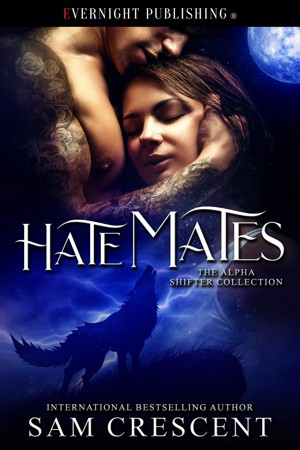 Hate Mates by Sam Crescent
Series: The Alpha Shifter Collection. Price: $3.99 USD. Words: 35,910. Language: English. Published: July 19, 2022 by Evernight. Categories: Fiction » Romance » Paranormal » Shifters
Since birth, Landon and Alexa have been told they will be together as true mates. There is no fighting destiny in the pack. But they hate each other. As kids, they couldn’t stand each other, but later, when the time comes for their mating, the pack wants them to finally come together. For three years, they ignore one another, never acting on nature’s gift. 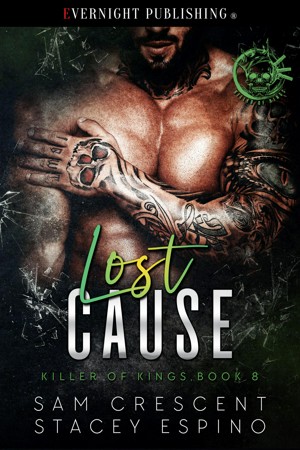 Lost Cause by Sam Crescent & Stacey Espino
Series: Killer of Kings. Price: $3.99 USD. Words: 47,440. Language: English. Published: July 14, 2022 by Evernight. Categories: Fiction » Romance » Contemporary, Fiction » Romance » Suspense
Priest doesn't believe he deserves reward in this life or the next, and he's fine with that—he lost his faith decades ago. After committing a bloodbath in the name of revenge, he has no regrets. He lives his life of solitude, working for Killer of Kings to keep the demons at bay. When an innocent woman gets in his way during a hit, his once dormant conscience comes back to haunt him. 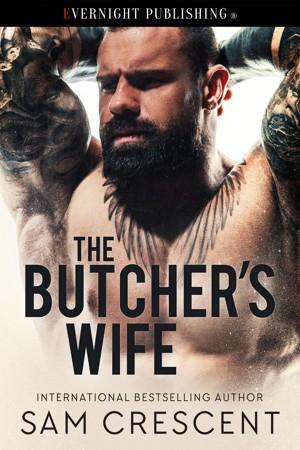 Valentina has been picked to be The Butcher’s wife—the most deadly man within the Rossi mafia. He's exactly what men fear, and now she is set to be his wife. He could have any woman, but instead, he picked her. Why? She was passed over by Thomas Rossi’s son because she was broken and damaged.
View their profile to see all of their books