Published 2014-11-18.
Do you remember the first story you ever wrote?
I do! It was called "Adventures of a Bear," and I wrote it during my first year of elementary school. At least I think it was the first full story I ever wrote. I was more into drawing before that, so most of my stories were more visual before first grade. The bear story was visual, too, but there was definitely a narrative there. Anyway, I think the reason why I still remember that story is that my teacher, Mrs. T, entered it in a short story competition without my knowledge. It ended up getting an honorable mention or something, and I remember being completely gobsmacked that anyone would want to read something that I had written in school.
Describe your desk
It's pretty out of control. By that I mean messy, of course. I actually have a standing desk, so there's not a whole lot of horizontal real estate to put things on. But whatever space I find gradually gets covered with a patina of notes, gadgets, receipts, business cards, concert and baseball game tickets, and pens.
Where did you grow up, and how did this influence your writing?
I grew up in Bristol, Vermont which is tucked up in the northeastern corner of the US. It's a beautiful place filled with good people. I really miss the people there.

I was raised in a close-knit community where everybody knew everyone else. My friends from K-12 are still some of my closest, and they're my audience when I write. I specialize in a topic that is not familiar to most people outside of Japan, so I try to write in a tone that would resonate with the good people I spent 18 years of my life with in Vermont. By imagining how they might react to my writing--even to the point of visualizing their critiques of my approach--I'm better able to cut the fat and get straight to the point.

I daresay that this same community fostered a strain of honesty in me that prevents me from preaching when I talk or write about shochu. I can hear my family and friends saying, "Come on, Chris. You sound like a pompous ass. Why don't you try writing that section again?"

And I always heed their advice.
What's the story behind your latest book?
I moved to Japan in late 2002, and I was immediately taken with this country's food and drink culture. I drank nihonshu (called sake in other parts of the world) most of the time at first, and it was fun because everyone knew a little about it and had an opinion or some anecdote that they could share. But then I started asking questions about shochu and awamori, and the information didn't flow nearly as freely.

That piqued my interest. Back in 2003, nihonshu and shochu were neck and neck in terms of yearly sales, but shochu has greatly outpaced its more internationally recognized relative ever since (domestic sales). Shochu was just crazy to me. It was everywhere, but it didn't seem to get the same amount of attention as nihonshu. The flavors and aromas were as diverse as anything that I had ever tried before, and the food pairing possibilities are endless.

I spent the next decade trying to figure shochu and awamori out. I visited distilleries all over the place, talked to anyone who professed an affection for these spirits, and generally just geeked out on a regular basis.

Anyone who has met me will be able to imagine what I'm talking about. See, I was originally a beer snob. I started home brewing when I was in my mid-teens, and I somehow parlayed that into an apprenticeship at Otter Creek Brewing in the 90s. I originally worked in kegging and bottling, but my heart truly floated in brewing good beer.

Then a crazy thing happened. Our first brewer had to take time off because of a back injury, and the second brewer literally--and this is not a joke--ran off to join the circus. In a pinch, the owner ordered me up on the brewing platform since I was one of only two other people in the plant that had any brewing experience.

Long story short: I brewed the night shift in that heaving, creaking factory, and it was terrifying to be the only person in there at 3 AM. But it was also awesome. I developed an enduring love of the process and learned firsthand about the focus and passion that goes into something that other people will pay money to take home and enjoy with their home-cooked meals.

Fast forward one decade and I'm in Tokyo, Japan. Craft beer was just starting to find its feet here, but I was fully focused on shochu. I was spending so much time learning about it that I realized I should share what I had found. There was precious little written on the subject in English, and I was talking about shochu in front of a camera all the time anyway, so I figured that I needed to write a book.

That realization came in 2011, just before the big earthquake and all the nasty aftermath. Soon after I decided to take a crack at the Shochu Sommelier/Adviser test that the SSI administers. It wasn't easy, or even fun, but I eventually prevailed. That gave me the impetus to push through the last dozen or so hurdles separating me from finishing the manuscript, and the book was born in July of 2014.

As a weird sort of conclusion, I love how my beer nerdiness set the stage for my shochu geekdom. You've just got to buy a ticket and take the ride, I guess. I think someone famous said that once. Whoever it was, they were right. Even if nobody in the room believes that what you're interested in is worth anybody's time,
When you're not writing, how do you spend your time?
I spend time going to baseball games, and I eat out a lot. There's a lot of good food in Tokyo, so I'm always eager to expand my palate and learn about new flavors that can be paired with shochu and awamori.
Smashwords Interviews are created by the profiled author or publisher. 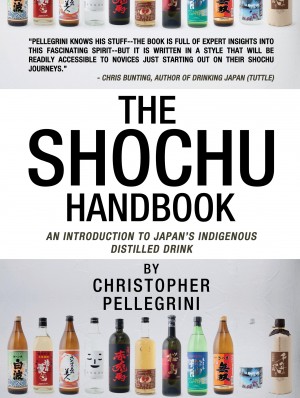