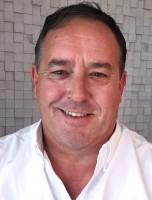 This interview has been viewed 242 times.

Interview with Stephen B King

Who are your favorite authors?
Without doubt Stieg Larsson with his Dragon Tattoo trilogy spoke to me. His characters were incredibly drawn. My slightly more famous namesake can without doubt tell a great story too and Ive read everything he has ever written
What inspires you to get out of bed each day?
Two things really. My mother sadly suffered from Alzheimers and wasted away in a nursing home. Im told I have a one in four chance of going the same way so every day I can recongnise my wife is a good one. Secondly since I got back into writing it's the one thing I look forward to doing more than anything else.
When you're not writing, how do you spend your time?
Thinking about what Im going to write next. That may sound corny, but it's true. if I'm not writing, I'm plotting and planning.Naturally I have a carreer outside writing, and a wife so the day to day stuff gets in the way too.
How do you discover the ebooks you read?
I think a good book cover that grabs your attention helps. If its in a genre I like, namely thrillers, and has an intriguing outline Im always happy to try new authors and discover gold. Of course once I find an author I can relate to and enjoy I want to read everything he, or she, puts out.
Do you remember the first story you ever wrote?
Yes I do, how could I forget something which so many others thought forgettable? it was an entry in a short story writing competition, and received an honerable mention in dispatches, and got short listed. I was delighted with that being so young and so new. it was called Michael's Playmate, and had a rather gruesome ending.
What is your writing process?
Once I get the spark of an idea and have spent some time thinking about it and making sure it's workable, I get into a head space where there is nothing else I want to do but write. Most times its like the story is coming 'through me' rather than 'from me', if that makes sense. When in that zone I can write five to ten thousand words in a sitting and then sit back and ask myself "where did that come from?"
Do you remember the first story you ever read, and the impact it had on you?
Not the first no, but I can remember books that impacted on me for the storyline and plot that they had. Isn't it a wonderful experience when you find a book that you just do not want to put down? And it gets to three am in the morning and you have to be up at six to go to work but you just have to read that one more chapter.
How do you approach cover design?
I'm very fortunate indeed to have Katrina Wall do that for me. She has never done anything that didn't 'knock my socks' off. She also does my web site design and is one of the lovliest ladies, and most talented people Ive ever had the pleasure to know. It was an amazing experience the first time she did a book cover. To physically see a concept in colour that had only lived in my imagination was incredible. I still get goosebumps when I remember back to that first time I saw her work.
What do you read for pleasure?
To be perfectly honest, these days I spend so much of my free time writing I have little left to read. When I do I just cant get enough of a really good police procedural thriller.
Describe your desk
Messy for work and empty for writing other than a coffee cup, or wine glass.
Where did you grow up, and how did this influence your writing?
I was a youth in the late 60's in the UK, and what a time to have lived. For some people sex drugs and rock and roll are a cliche - for me it was a way of life. My love of really good, thought provoking lyrics in songs infuenced me firstly to write poetry, and secondly to learn to play guitar and write songs, and so I entered my demi-god-rock-guitarist stage of my life.
Published 2016-06-22.
Smashwords Interviews are created by the profiled author, publisher or reader. 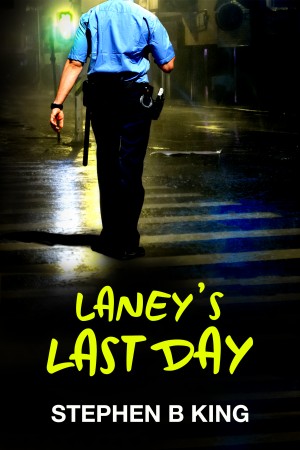 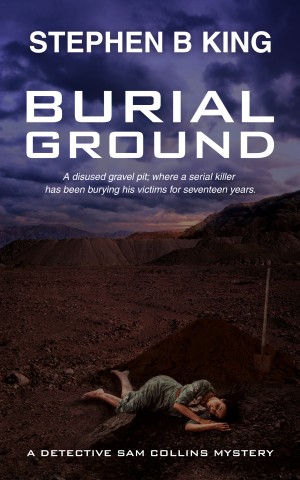 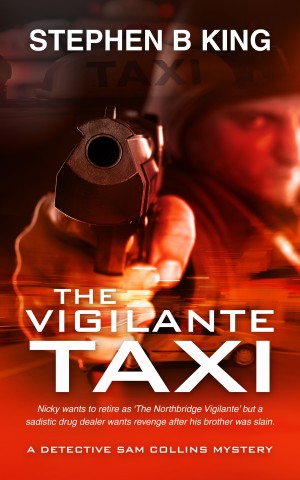 The Vigilante Taxi by Stephen B King
Price: $2.99 USD. Words: 95,790. Language: English. Published: June 22, 2016. Categories: Fiction » Thriller & suspense » Crime thriller
Night shift taxi driver Nicky suffered several tragedies in his life, but now wants to retire as The Northbridge Vigilante, because he has met the love of his life. He has killed five people who were in the act of violent crimes and saved the lives of their victims. But the police are getting closer and a sadistic drug dealer wants his revenge after Nicky shot dead his brother.