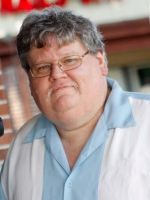 Published 2013-09-24.
When did you first start writing?
I've been a story teller for as long as I can remember. However, I had a hard time writing. I have dyslexia, which for me, made the physical act of writing torturous and spelling is a real challenge. Everyday I thank the gods for the invention of the wordprocessor!

I started writing seriously about a year ago. Somehow the only thing I got out of the creative writing classes I kept signing up for was my first drafts weren't good enough and you HAVE TO write from an outline. Well it took me forty years to learn that was bunk. No sane person should expect a first draft to be great and there are people out there to help you smooth things out. Editors and beta readers are wonderful people! And there is nothing wrong with writing by the seat of your pants!

The best writing advice I ever got, and I wish I would have heard it forty years ago, is: Find what works for you and just do it. Writers write. Get your butt in the chair and start writing!
What's the story behind your latest book?
My current WIP (September, 2013), "Return to Cooter Crossing," is a Southern family drama. Cooter Crossing is a small town, village really, in the backwaters of Big Cypress County along the west central coast of Florida. The story centers around the various extended members of the Quinn family returning for Thanksgiving and trying to figure out how they fit in the family and the wider community.

The central character is Aidan Quinn. He's been studying in Ireland and just had a bad breakup with his lover. He returns home to find a lot has changed. His sister is pregnant, his nephew is coming out, and someone is trying to kill him. So, he's having fun trying to stay alive, look for a job and go on a date.
What motivated you to become an indie author?
After my friend Cynthia finally convinced me to get my butt in a chair and start writing, I started doing a lot, and I mean a lot, of research about writing. Not just the craft of writing, it'd been a while since those undergraduate writing classes, but the whole publishing thing. After all, one of the reasons you write is to have others read the story. The more I learned about the "traditional" route to publishing the more I thought, why the hell would anyone want to do that? I'm a media guy in real life so I'm cool with the tech stuff involved in publishing. I think print is pretty silly in this day and age. Epublishing and print on demand, if you really need a hard copy, seems like such a no brainer to me. I guess if you want in a bookstore traditional publishing is the way to go, but bookstores are going the way of video rental stores. So, you know, why go through the hassle?
How has Smashwords contributed to your success?
It lets me get books on Barns & Noble for free so Amazon will price match them. I like that I can upload to one place and distribute to many retail spaces. But I haven't found a way to break down the stats from the different vendors so that is kind of a wash. I'm glad Smashwords is here, but it is pretty insignificant compared to Amazon as far as my sale/download numbers go. But, I'm still new at this, so time will tell!
What is the greatest joy of writing for you?
Getting a message or review from some random person who found one of my stories and liked it. For a kid that was told he was barely literate, that is extremely cool.
What do your fans mean to you?
Well I don't have that many yet and I'm kind of weirded out by the word fan. However for the folks that have told me they like my work, thanks. I don't know if most readers know how important it is for writers to get feedback, at least for me, from their readers. And yes I eat up the loving, but I also appreciate the constructive comments. I know I still have room to grow as a writer and I am always fascinated to hear what others took away from a story. Sometimes I wonder if they read what I wrote! :)
What are you working on next?
Wow, that is a loaded question! I have a number of story ideas for my Bennett Bay series. And there is a sci-fi trilogy I really want to get to. I also have a number of short story ideas jotted down so I have no lack of things to work on! All I need is time and focus.
Who are your favorite authors?
Just picking three:
Arthur C. Clarke, I grew up in Florida, along the "Space Coast," and watched the Apollo rockets take off. As a kid I pretty much lived science and science fiction. I still don't understand why my car won't fly. Of all the sci-fi writers I really connected with Clarke.

J.R.R. Tolkien, I came across the Lord of the Rings in high school. At the time, my family had moved from a great place on the water in Florida to a hell hole out in the desert. I needed an escape. I needed to believe in nobility and honor. I think Tolkien kept me alive.

Joseph Hansen, some afternoon when I was in college, I was cruising the university book store and ran across one of Hansen's Dave Brandstetter mystery novels. I had never come across fiction with a "real" gayman as the main character. Not only was it a damn good detective story, it reflected my life. That had never happened before. I bought more. I don't know if I can explain how important those books were to a twenty-something guy dealing with his sexuality. It is kind of hard to imagine how isolated we were back then. I really wish I would've figured out how to say thank you to him before he died.

I'm sure other writers have played a more formative role in my writing, but these influenced me as a man and that is more important.
Do you remember the first story you ever wrote?
Vaguely. I don't know if it was the first but it is the one I remember. I think I was in 5th grade. It was about this spaceship called The Venus Five. What I mostly remember is how crushed I was when all the teacher said was I needed to work on my spelling. Nothing about the story. Just reminded me that I couldn't spell. I already knew that.
What is your writing process?
Spend a lot if time on social media, stream a video and when I run out of distractions I end up writing something. Yeah, I need to work on that.

I'm a very visual guy. My degree was in video production so image is important. I usually have an image or a scene in my head that gets a story going. When I'm starting a new story, I find it really helps if I rough out a cover. For some reason, that keeps me focused.

For the actual writing, I just let it unfold. For me, it is like watching a video in my head and I'm just writing it down. I have no idea where it is coming from. Outlining kills my creative process, I just can't do it. I also have to write the first draft in sequence. I know other folk can write the end and work toward it or write scenes out of order. That just doesn't work for me. That's why you really need to find what works for YOU. If it works for you, it is the right way to write. The only wrong way is to not write.
Do you remember the first story you ever read, and the impact it had on you?
What's with the "first thing" thing?

I can say there were a number of stories that impacted me as a child. I think "Where the Red Fern Grows" by Wilson Rawls really spoke to me. I was a boy with a hound dog roaming the woods and swamps of Florida so I could really relate to the boy and his dogs story. Damn thing still makes me cry.
How do you approach cover design?
Most of my stories are pretty character and setting focused so I try and find a stock image that speaks to me about that. I look forward to the point when my writing is generating enough to pay for custom art. For now I hope that photoshopped stock art will be good enough to get folks interested in giving my stories a look.
What is your e-reading device of choice?
Whatever I have in my hand. I do love my old kindle, but I read on my phone, laptop and PC nearly as much. I do like how Amazon will sync everything. For me that is worth the price.
Where did you grow up, and how did this influence your writing?
I did most of my growing up in Florida, both the east and west coast. I also have family that goes back four generations here. I have to say that in a very real way Florida is the main character in my Bennett Bay stories. I've also lived in Arizona and Minnesota and they've shown up in two of my short stories.
Smashwords Interviews are created by the profiled author or publisher. 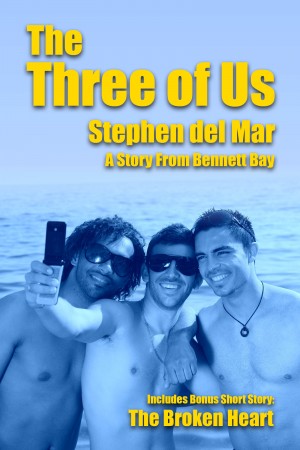 Ever fall head over heels in love with a guy or feel like you’d jump off a bridge for him? Well that’s Sam’s problem. It’s the first week of college and he’s following his jock of a roommate around like a puppy dog. It’s pretty pathetic and he knows it. Then he sits down next to this little nerd in his English class and things change. Includes bonus short story: The Broken Heart 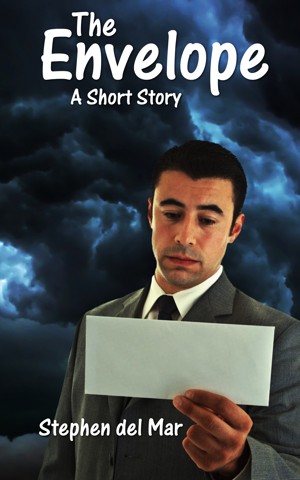 A tropical storm is battering Bennett Bay, a small town on Florida’s Gulf coast. Tony’s trying to close a sale on a house. The commission on this property will be a life changer but it just isn’t going to happen. He fights his way home through the storm to find a mysterious envelope waiting for him. Will it add more misery to a bad day or will it be a ticket to move on?