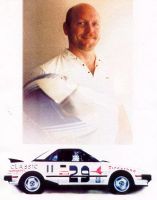 This interview has been viewed 1,151 times.

Published 2013-11-30.
What's the story behind your latest book?
Live For Today is the latest book dealing with suicide and bullies. A story about high school, football and falling in love. The story is about a gifted student who loses his faith and regains it, realizing events that happened were not his fault. This coming of age story is based on what happened to me in high school. A feel good story it is something people of all ages can read. It is being made into a movie by high school students in Texas. A seventeen-year old filmed the entire movie with a thousand dollar camera. Check out the trailer on Smashwords or YouTube.

Some of my other works have gotten me in a little hot water when I printed essays about the government. I have contacted my local Congress people and the President numerous times over the last twenty years. Four years ago it seems some of the things I wrote created problems. I was audited four years in a row going back six. Things became worse when I joined the Tea Party. My Accountant said I was being targeted before the IRS probes were revealed. I decided to put all my writings together to make people think. It's okay to be a liberal and want to help and it's okay to be a conservative and control spending. Neither exist in Congress. You have three choices but you can only pick one; You're a Democrat, or a Republican or an American. These are issues I address in "Meandering Scribbles of an Old Fart," and "Words That Don't Offend Liberals" (This is a notebook on CreateSpace you can download the PDF on Smashwords for free).
How has Smashwords contributed to your success?
Words can't describe how much Smashwords has helped and made me start writing again. All formats and so easy to prepare the eBooks. So much more and so many ways to market. To anyone who writes, Smashwords is my first recommendation and not only because it is free. You can now market your stories without any fees.
What motivated you to become an author?
I raced cars professionally and began to write racing articles. Then I came up with an idea for a racing book, "Formula 2000, the Dream," based on what my son Beaux Barfield had done. He is now the Race Director for the IRL IZOD racing series. What wonderful adventures we had together. Raising my son and daughter gave me great insight to life and writing stories. Writing has helped me solve the problems I couldn't in real life. My two favorite novels are "Moon Shadow," and "The Cajun." Moon Shadow, written in 1994 is eerie in that events in the book are actually happening today. It takes place in 2014 and tells how a Democrat elected in 2008 bankrupted the country with a debt of 20 trillion. It also details how Al Queda and members of the Muslim Brotherhood walk across the Mexican border unmolested.
What is the greatest joy of writing for you?
For me writing is like going to the movie. I can see the story evolve in my head like I was in a movie. Although it may sound strange I couldn't solve a problem in one of my novels and one night I had a dream about that problem and I watched as the characters in my novel actually were in the scene and solved the problem in my dream. Writing solved the problems I couldn't in real life.
What inspires you to get out of bed each day?
The alarm clock
What are you working on next?
My novel "Moon Shadow" has two parts now and I'm working on the third and fourth novel in the series. Also I'm working on "Sequestro" about a kidnapping in Colombia. An X-Files story called "Zone of Silence," and two faith-based stories like my novel "Live For Today." They are "Redemption" and "El Norte."
Who are your favorite authors?
My favorite author is Edgar Rice Burroughs, because his stories made me read again. I had read "A Separate" by Steinbeck and was so depressed over the death of one character I quit reading for two years. Then one summer at my grandmother's house I started reading "Land of Terror" by ERB. I read ten of his books that summer. I now have about twenty of his books including an original Tarzan of the Apes printed in 1913.
When you're not writing, how do you spend your time?
I race cars professionally, design residential houses and have built my own house from the concrete up. That includes framing, electrical, plumbing and sheetrock. I have a giant slotcar track and love to scuba dive.
How do you approach cover design?
I do all my own book covers. It seems I have multiple ideas while writing a book.
How do you discover the ebooks you read?
Random. Just cruise through Smashwords looking for adventure.
Do you remember the first story you ever wrote?
Yes. I was eight and it was about a boy injured in the jungle of Africa. He was frail and nursed back to health by a girl in the safari. Afraid and weak he became tough and strong. I lost the book after my father died and my mother moved. I didn't write again until I was thirty-four. Oh, I flunked high school English.
What is your writing process?
I have a calendar with a number three marked on each day and I try to write three pages a day. Sometimes I'm short of pages but some days I write more. One week in California I wrote about four to six pages a day and that weekend I wrote fifteen pages on Saturday and 33 on Sunday. My best week ever.
Do you remember the first story you ever read, and the impact it had on you?
A Separate Peace by John Steinbeck. It left me so depressed I didn't read anything for two years.
What are your five favorite books, and why?
Land of Terror - It made me start writing again.
Tarzan of the Apes - I loved the adventure
Planet of the Apes - What a great ending to the book
Jaws - Great Idea and wonderful approach. While scuba diving I've actually pulled a sharks tail so I could get a better picture.
Flight of the Old Dog - Dale Brown.

I also read; James Rollins, Clive Cussler, Tom Clancy and Stan Lee (I bought one of the original "Fantasy 15" in August 1962.
What is your favorite sandwich?
Grilled peanut butter and Hershey bar.
What do you read for pleasure?
Action-adventure like Clive Cussler, Dale Brown, Edgar Rice Burroughs and James Rollins
What are some other memorable events?
I won my first road race on the last turn of the last lap and I won my first professional race at the 6 Hours of Sebring even after the engine blew up in practice.
What are your greatest accomplishments?
My son Beaux and my daughter Bex.
What is your e-reading device of choice?
Kindle
Describe your desk
My desk and book shelves are cluttered with adventure books and golden age comic books mostly Spiderman.
Where did you grow up, and how did this influence your writing?
I grew up in Corpus Christi. You will see the influence it has on my writings, especially facing bullies and surviving. The death of my father and my battle with faith. Most of this is reflected in my novel, "Live For Today."
What is your favorite book?
Land of Terror by Edgar Rice Burroughs. After I read it I read a book a week during that summer. May not sound like many books but never read a book on my own until then.
What is your favorite movie?
Tie between Star Wars and Raiders of the Lost Ark
What is something unusual that happened to you?
When I got married at midnight in a jail in Mexico.
What are your thoughts on our government?
Ugly (not printable)
Smashwords Interviews are created by the profiled author or publisher. 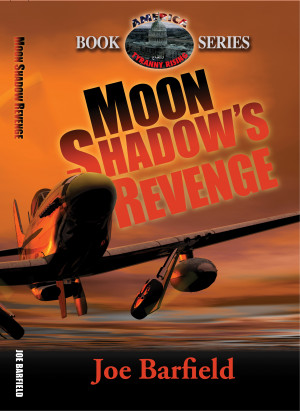 Moon Shadow's Revenge by Joe Barfield
Price: $3.99 USD. Words: 140,130. Language: English. Published: December 19, 2017. Categories: Fiction » Adventure » Action, Fiction » Romance » Action/adventure
America has collapsed but Beau Gex, and Krysti Socorro have found love and they are safe. Their peace is destroyed when Krysti is kidnapped. Beau swears revenge even if he must illl them all to find her. But before he can rescue her it will be a long journey and he will need to deal with the "Crazies" and the Sand people. 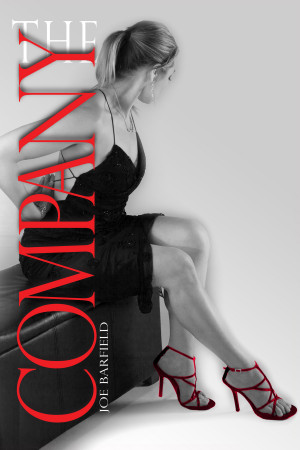 The Company by Joe Barfield
Price: $3.99 USD. Words: 56,600. Language: English. Published: December 12, 2017. Categories: Fiction » Thriller & suspense » Action & suspense
Five members of the mafia break into the Whitman house with the intention of revenge and killing the whole family. When the husband tries to defend his wife and son things change and a few moments later all five of the mafia are dead! 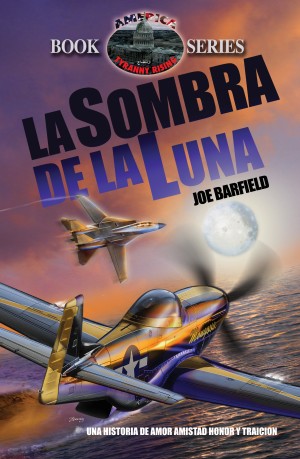 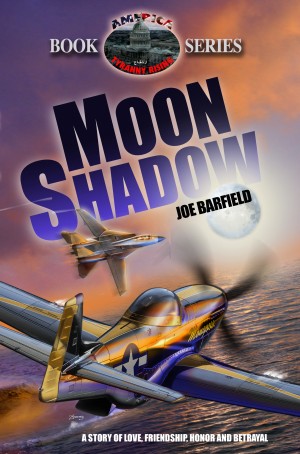 Moon Shadow by Joe Barfield
Series: America Tyranny Rising. Price: $3.99 USD. Words: 125,940. Language: English. Published: April 20, 2015. Categories: Fiction » Adventure » War & military adventure, Fiction » Thriller & suspense » Action & suspense
Trapped behind enemy lines, a handful of America's best jet pilots, led by ace Beau Gex, discover a dozen old World War II aircraft that they can use in guerrilla-type warfare against the invaders—their enemy. But when the invaders find one of the SR-71 Blackbirds—and intend to use it to destroy the space station, Starburst—Beau and his men are forced to fly one last deadly mission. 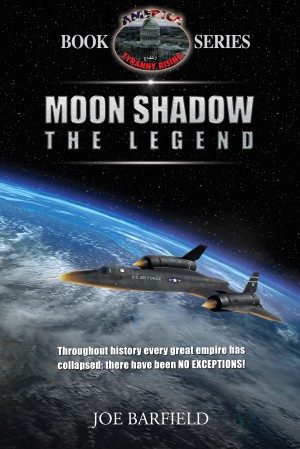 Considered a traitor and murderer, Beau Gex, with the help of military friends, is determined to return to America and warn her leaders, but he soon learns they are the problem. Could America’s top secret, Aurora Project save or destroy America? Will he be too late? Will the old Indian legend, Moon Shadow, save him or destroy him? 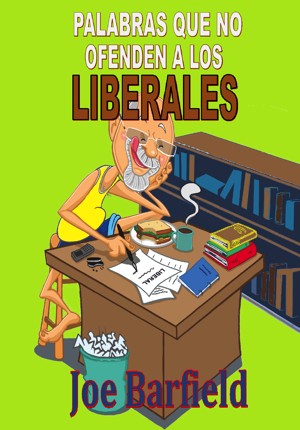 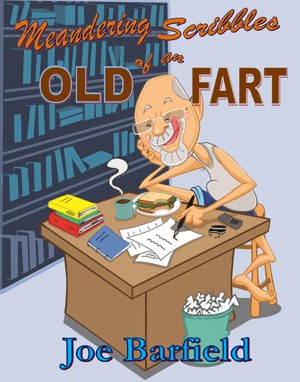 Meandering Scribbles of an Old Fart by Joe Barfield
Price: $3.99 USD. Words: 166,780. Language: English. Published: May 17, 2013. Categories: Essay » Political
People need to look at their government. I have written articles for over 20 years; from the first Bush to Obama. We have problems we need to face and quit sticking our head in the sand. It's okay to be a liberal or a conservative, but neither exists in our government today. Our politicians do everything but what they were elected to do: Represent the People. 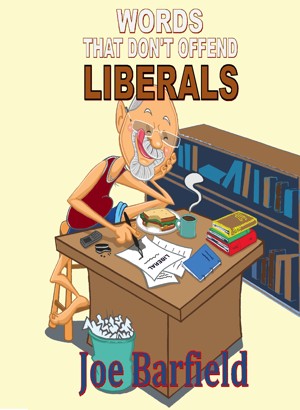 A humorous look at words that don't offend Liberals. The book will probably offend Liberals. This is meant for the entertainment of open minded people. This a book to keep notes. For a printed copy you can find the book here: https://www.createspace.com/4221000 Check it out before you purchase your printed copy. Fun gift for your Liberal friends. They may never forgive you. 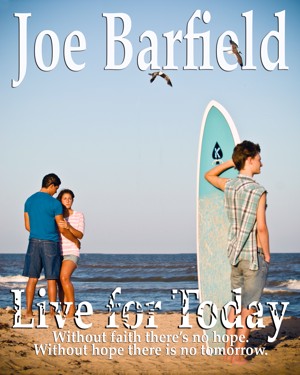 Live For Today by Joe Barfield
Price: $3.99 USD. Words: 84,070. Language: English. Published: September 21, 2012. Categories: Fiction » Young adult or teen » Family, Fiction » Children’s books » Social Issues / Bullying
A broken promise takes a gifted seventeen-year-old boy down a suicidal path of self-destruction. When asked about his future he says, “I live for today, there are no tomorrows for me.” Can the persistence of his coach help? Will the love of a girl, and her secret, be enough to save him? Without faith there is no hope. Without hope there is no tomorrow. With faith anything is possible.
View their profile to see all of their books