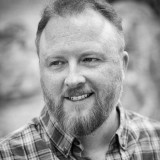 Published 2018-01-09.
Where did you grow up, and how did this influence your writing?
I was born in a European country which no longer exists, but raised in the San Francisco Bay Area in the 1970s and 1980s. I cut my teeth on the science fiction of Ray Bradbury and Jules Verne, the fantasy of C.S. Lewis and Morgan Llywelyn, and the horror of Mary Shelley and Stephen King. I consumed Twilight Zone, Star Trek, Creature Features, Wonder Woman and the Bionic couple on television, and comic books featuring Tarzan, Black Panther, and the rest of the capes and cowls. I listened to old time radio dramas on LP and cassette. I began film study at a very young age, learning an appreciation for classic horror and adventure films from my father and grandfathers.

Then Star Wars came out when I was nine, and the horizon shifted. Each of those diverse stimuli reacted with some part of my brain, forging the impetus to become a storyteller as a vocation.
When did you first start writing?
I wrote and illustrated my first children's book at age four. It featured Snoopy (from The Peanuts comic strip) saving a deep sea diver from drowning. My dad photocopied and distributed it at his job in the nascent Silicon Valley. Having lost a little brother about the same time, I was very protective of the next two siblings to come along. Throughout grade school, I would write and illustrate story books for them. The story books became comics, and the comics became short stories in the fantasy vein.

In junior high, one of the English teachers taught a sci-fi/fantasy lit elective. She was the first to take a real interest in the stories I was writing, and to push me to hone that skill. A couple theater and English teachers in high school saw whatever kernel of talent I had and likewise helped me along the path.

In my junior year in high school, I wrote a feature screenplay - a supernatural thriller called Project, which was shot that summer and submitted to PBS the following year. It was included as part of a "young directors" series in the Bay Area. Although I wasn't paid for it, that was my first indication that I could write compelling stories for an audience beyond my friends, teachers and family.
What's the story behind your latest book?
A Shield Against the Darkness is the prequel to E.J. Blaine's fantastic pulp adventure Assassins of the Lost Kingdom. It's book #0 in the Airship Daedalus series, and it describes the events which cause the Daedalus crew to come together, as well as some past events which inform their present lives.

For readers who enjoyed the original Airship Daedalus comic strip I wrote (with the awesome pulp artwork of Brian Beardsley), this will definitely be familiar territory, albeit much deeper and more detailed.
What is the greatest joy of writing for you?
The greatest joy of writing is to give life and voice to unique and dynamic characters, and create compelling adventures upon which to send them. It's kind of a god complex, to be sure, but it's also in the service of human culture.
What do your fans mean to you?
Quite simply, they are everything. Without them, there is no audience reading my work, thus no career, thus no point existing as a content creator.
What are you working on next?
I'm currently about one-third finished on the follow-up to E.J. Blaine's Assassins of the Lost Kingdom. Airship Daedalus: The Golden City follows the crew of a refitted Daedalus from a windswept Scottish island to the streets of London, over Europe and across the Mediterranean into Africa. They are on the trail of the airship Percival, which has mysteriously gone missing. Fans of the Daedalus series will recognize some familiar faces, and find some new characters as well.

I'm also finishing a second short story for (and editing) the upcoming AEGIS Tales anthology, which collects fiction set in the Daedalus world by various authors like Trish Heinrich, Dave Clelland, James Stubbs and Colin Fisk.
Who are your favorite authors?
There are too many to list, but the authors who most influenced my style are probably Ray Bradbury, Robert E. Howard, Wendy Pini, Rod Serling, Ursula K. LeGuin, Stephen King, Morgan Llywelyn, Mary Shelley, Joss Whedon, Leigh Brackett, and John Steakley.
What inspires you to get out of bed each day?
To live for my wife and daughter, and to tell some good stories.
How do you discover the ebooks you read?
Almost strictly by word-of-mouth, or referral on a podcast or YouTube show.
What is your writing process?
1. act outline
2. scene outline
3. write
4. revise as needed
5. edit

Outside of that basic framework, I'm also constantly thinking of opening lines, scenarios, dialog, and bouncing ideas off other author friends.
Do you remember the first story you ever read, and the impact it had on you?
The first concussion cut the rocket up the side with a giant can opener. The men were thrown into space like a dozen wriggling silverfish. They were scattered into a dark sea; and the ship, in a million pieces, went on, a meteor swarm seeking a lost sun. - Kaleidoscope by Ray Bradbury

It's a nearly perfect opening. It's visceral, haunting. It hooks you into the horror of being flung into space with only radio contact between you and your fellow humans. A lot of sci-fi would have started long before that moment, explained how the rocket functioned or what the crew's mission was. But Bradbury cuts right to the chase and examines the human side of the story. All the other stuff doesn't matter.
How do you approach cover design?
As a designer, I want to compose an image that evokes the theme of the text and draws the eye. With the Airship Daedalus covers, I featured the ship herself, since the theme is adventure and exploration. With the vigilantes series (Serpent, Serpent's Sacrifice, Serpent's Rise, etc) by Trish Heinrich, I center on the main character after a fight, her back to the viewer but looking over the shoulder as if to say, "try it, buddy."
Smashwords Interviews are created by the profiled author or publisher. 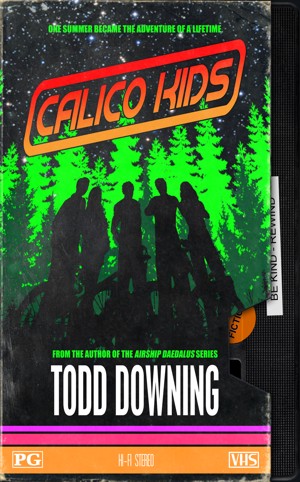 Calico Kids by Todd Downing
Price: $2.99 USD. Words: 49,740. Language: English. Published: September 18, 2020 by Deep7 Press. Categories: Fiction » Science fiction » Adventure, Fiction » Horror » Weird fiction
A group of young teens in rural Oregon investigate the disappearance of some fellow students, and end up getting much more than they bargained for: ghosts, government agents, the local sheriff and her deputy, high school bullies, and an interdimensional crisis of literally Earth-shattering proportions. 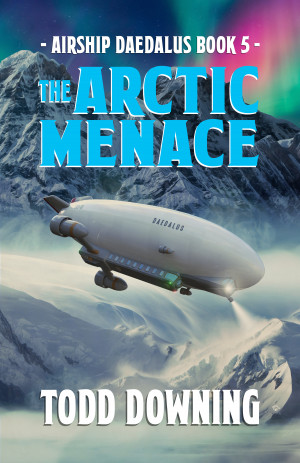 Airship Daedalus: The Arctic Menace by Todd Downing
Series: Airship Daedalus. Price: $2.99 USD. Words: 50,350. Language: English. Published: May 8, 2020 by Deep7 Press. Categories: Fiction » Adventure » Action, Fiction » Science fiction » Steampunk & retropunk
A mysterious signal from the frozen north. A race against time to keep the dead from rising. A fierce battle at the top of the world against a most ferocious enemy. Book 5 in the Airship Daedalus saga. 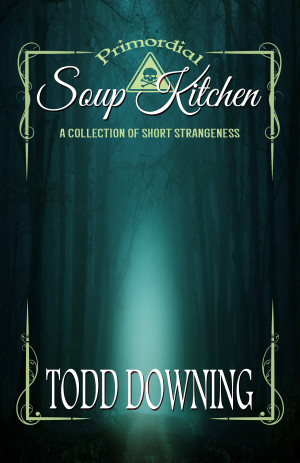 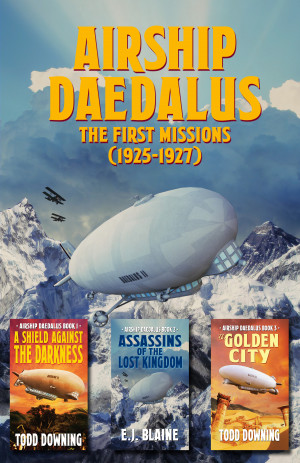 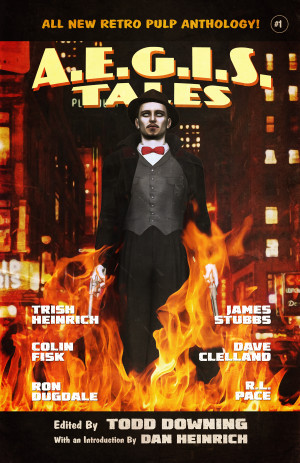 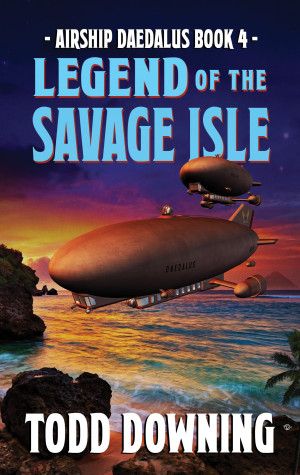 Airship Daedalus: Legend of the Savage Isle by Todd Downing
Series: Airship Daedalus, Book 4. Price: $2.99 USD. Language: English. Published: June 9, 2019 by Deep7 Press. Categories: Fiction » Adventure » Action, Fiction » Science fiction » Steampunk & retropunk
The combined crews of the airships Daedalus and Percival pursue the sinister Silver Star cult from Africa to India, across southeast Asia and out over the uncharted South Pacific, where the innocent inhabitants of a remote island are under a terrible supernatural threat that brings the legacies of Moreau and Nemo together. 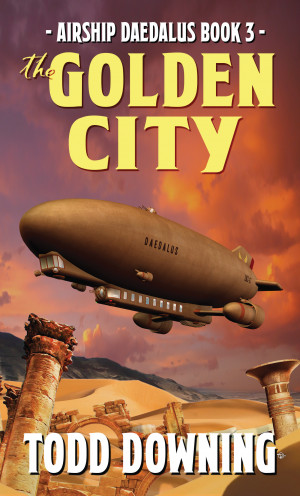 Airship Daedalus: The Golden City by Todd Downing
Series: Airship Daedalus, Book 3. Price: $2.99 USD. Language: English. Published: June 9, 2019 by Deep7 Press. Categories: Fiction » Adventure » Action, Fiction » Science fiction » Steampunk & retropunk
A mission to find an ancient Celtic artifact in Scotland leads the Daedalus crew on a perilous chase across Europe and the Mediterranean to find their former comrade and his missing airship, while the diabolical Silver Star cult prepares an evil ritual in a lost city in the desert. 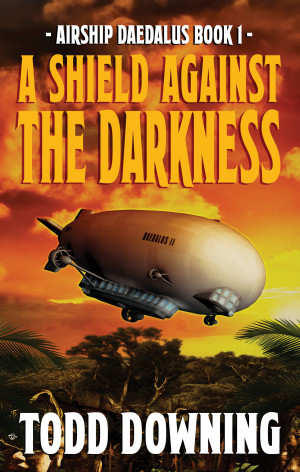 Airship Daedalus: A Shield Against the Darkness by Todd Downing
Series: Airship Daedalus, Book 1. Price: $0.99 USD. Words: 45,870. Language: English. Published: January 9, 2018 by Deep7 Press. Categories: Fiction » Alternative history, Fiction » Science fiction » Steampunk & retropunk
The origin of the Airship Daedalus crew and their first action-packed adventures, from a secret aircraft hangar in New Jersey to the skies (and depths) of the Caribbean, to the thick jungles of the Amazon. Can our heroes foil a nefarious plot by Aleister Crowley to open a portal into another dimension and summon a terrifying horror?