My father was in the Canadian Air Force, so I spent much of the first ten years of my life moving around Canada. I still have a bit of wanderlust in me, and it's all his fault. When I was (roughly) 10 he stopped in Saskatchewan, the middle of Canada, where weathermen were fond of saying the phrases "a beautiful day" and "highs of thirty below" in the same sentence. I started plotting my escape at an early age. I didn't have enough hair on my body for that kind of climate then, and I certainly don't now.

I can't say that this directly influenced my writing, but it made me a reader. Books are easier to make friends with, and with six schools in five years, I stuck with easy. Indirectly my bookworm habits drive my writing habits today.
When did you first start writing?
I puttered around with my first "book" eighteen years ago. It took me over ten years to "finish" it, and it was "crap".

But I enjoyed the process. That "book" got tossed in the electronic "bin", fortunately, and I started for real about six years ago. Four years ago I finally discovered what I was doing wrong (yes, Virginia, there really is a structure to stories) and it's been hell-bent since then.
What's the story behind your latest book?
The story behing "Have Wormhole, Will Travel" is in one of my earlier books. In "G'Day LA", the antagonist is a d-grade Hollywood director, and a subplot through the book is his attempt to get a sci-fi movie off the ground. The general plot line he used (aliens on Earth keeping an eye on us, until it's time for the hero alien to choose between loving an Earth girl or destroying Earth) is the plotline for this book.

It made writing interesting. In the genesis book, the director had cast the parts, so I used those actors, and their voices, when writing the book.
What motivated you to become an indie author?
Two things. One was a motivator, the other was an enforcer.

The initial motivation came from an exercise I was going through with an Australian based Sc-fi magazine. They were a startup, and I had spent almost a year working with them to get three of my sci-fi shorts in their publication. Then, a month before launch, they folded, believing the finances didn't make sense. That was a wasted year. At that point I decided to place as much control in my hands as possible.

What enforced in my mind that this was the right decision was a casual conversation during one of our writers' group meetings. A new member had mentioned that it took three months to find an agent, almost a year for that agent to sign her to a publisher, then a further two years to get the book on shelves. In that period of time I wrote and published six full-length novels. Case closed.
How has Smashwords contributed to your success?
Smashwords has allowed me to offer free copies to reviewers, distribute very broadly in the market (India, here I come!) and their premium catalogue enforces quality.
What is the greatest joy of writing for you?
Building worlds that didn't exist before I created them. I've been married longer than I can remember (I'll get in trouble for that) have two kids and too many bills. Writing (and publishing independently) is the *only* thing I have complete control over.
What do your fans mean to you?
Everything. I received a Tweet from a reader in Ireland who thought the books were fantastic and wanted more. A fan in the office (of my current day job) shows up with paperback copies of each book when it's released for an autograph.

I write for me, but it's very heartening to have so many people read and enjoy my words.
What are you working on next?
A screenplay adaptation of the book I'm writing (if that counts) and then I'm going to write the next in the Matt Daly series ("Matt's War" and "Daly Battles" being the first two). This time the telecomms engineers are in Australia, where nothing could possbily go wrong.
Who are your favorite authors?
Early James Patterson, David Baldacci, Agatha Christie, some Clancy, and in the independent field, William Knight, Lisa Hall Deckert and the fantastic Simon J Townley.
What inspires you to get out of bed each day?
There's too much stuff to do to stay in bed. Plotting the next book, editting and marketing this book, learning how to write a screenplay. It never ends.
When you're not writing, how do you spend your time?
I manage my son's soccer team, and I'm on the committee for my daughter's ten-pin bowling team. Plus, I live in Australia near beaches. If I didn't live near the water, I'd probably never get out of bed.

And seriously, not writing? "Writing" includes actual writing, editing, plotting, planning, marketing, cover design (and approval if someone else is doing it) and hours upon hours of daydreaming. I'm *always* writing.
Smashwords Interviews are created by the profiled author or publisher. 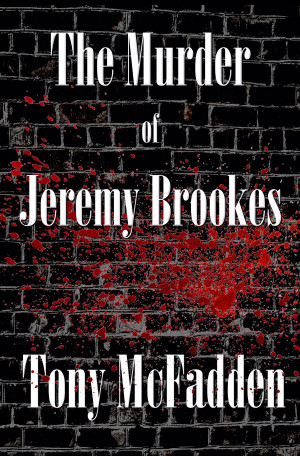 The Murder of Jeremy Brookes by Tony McFadden
Price: $0.99 USD. Words: 72,590. Language: English. Published: June 30, 2019. Categories: Fiction » Mystery & detective » Hard-Boiled, Fiction » Mystery & detective » International crime
Nothing could prepare Dan McGinnis for the depths he would plumb when a wealthy Sydney surgeon visits his office and ask him to investigate the murder of her husband, legal counsel for the owner of a right-wing media empire. The police say he was killed during a mugging gone bad. She thinks it was a targeted attack. Welcome to the darker side of politics, money and corruption in Australia. 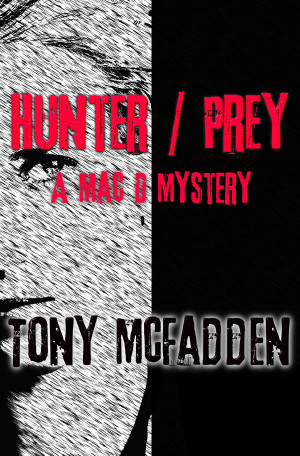 Hunter / Prey by Tony McFadden
Series: Mac D Mysteries. Price: $0.99 USD. Words: 46,350. Language: English. Published: December 1, 2017. Categories: Fiction » Mystery & detective » Hard-Boiled
Mac Durridge ekes out a living as a Private Investigator on NSW’s Central Coast, an idyllic region of coastal Australia. When the wife of a prominent politician is kidnapped and suspected to be hidden somewhere on the Central Coast, Mac is recruited to the team tasked to find her. Until the sh!t hits the fan and he ends up in the middle of a war he didn't expect, and doesn't think he can win. 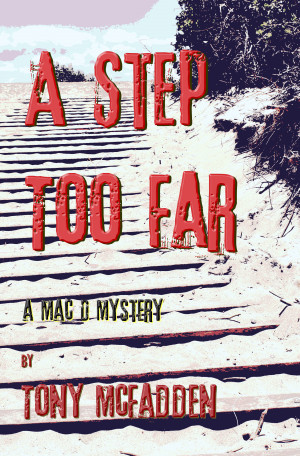 A Step Too Far by Tony McFadden
Series: Mac D Mysteries, Book 2. Price: $0.99 USD. Words: 51,030. Language: English. Published: February 8, 2017. Categories: Fiction » Mystery & detective » Hard-Boiled, Fiction » Thriller & suspense » Crime thriller
Four months after Mac sorted out the biggest bank job in his small Australian coastal town’s history, things start to unravel. An unexpected meeting on a hot summer’s day triggers a series of events that force Mac to choose between saving his own skin, or risking it for an innocent caught in the crossfire. 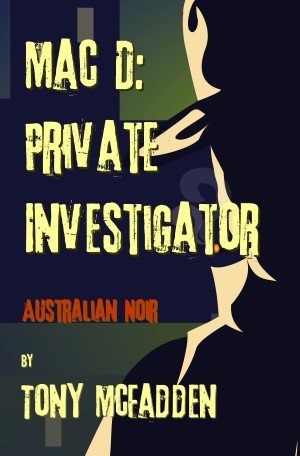 Mac D: Private Investigator by Tony McFadden
Series: Mac D Mysteries, Book 1. Price: $0.99 USD. Words: 39,670. Language: English. Published: February 14, 2016. Categories: Fiction » Mystery & detective » Hard-Boiled, Fiction » Adventure » Action
You'd think being a Private Investigator in a small, coastal Australian town would be pretty easy. Stolen cars, infidelity, small stuff, basically. That's what Mac Durridge thought it would be. And until he was framed for murder and a whopping huge bank heist, that's what it was. Now he's running from the police force that he used to work for, trying to get his ass out of the fire. 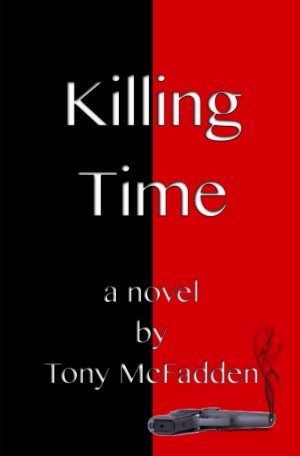 Killing Time by Tony McFadden
Price: $0.99 USD. Words: 47,090. Language: English. Published: April 14, 2015. Categories: Fiction » Mystery & detective » General, Fiction » Science fiction » Adventure
Detective Collins finished her career on a high, bringing in a pedophile before he killed his 13th victim. Meanwhile, a task force investigates a serial case, felons released on a technicality have been showing up dead for 30 years. Collins learns that the pedophile has been released and is shot dead behind a pool hall. Now the serial cases is personal and she’s involved. 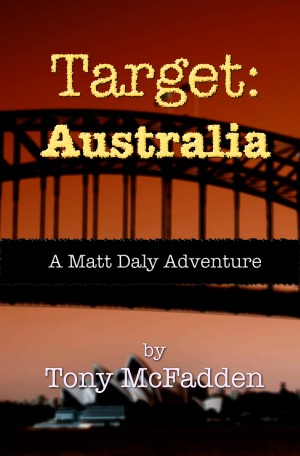 Target: Australia by Tony McFadden
Series: Matt Daly's Adventures, Book 3. Price: $0.99 USD. Words: 66,180. Language: English. Published: December 14, 2014. Categories: Fiction » Adventure » Action, Fiction » Thriller & suspense » Action & suspense
Matt and George, and their respective partners, decided Australia would be a nice place to relax after the hell that was North Korea. Unfortunately, Australia wasn't so accommodating. A chance opportunity to pick up a couple of bucks draws Matt and George, and Catherine, into a web of terror that stretches from Sydney to Darwin. Now they have to fight for their lives. 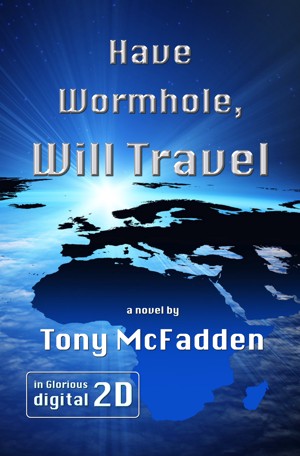 She thinks he's a hot vampire. *He* thinks she's a cute Earthling. And unfortunately his planet wants to destroy ours. Will he help them wipe us out? Or will he follow his heart, and protect Earth for the woman he loves? 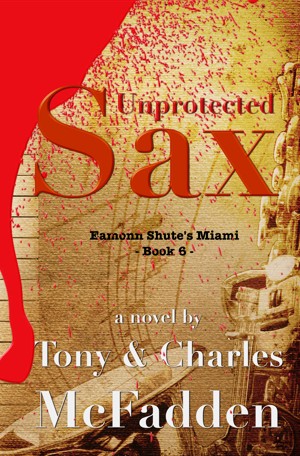 Playing sax in his friend's jazz band was supposed to be relaxing. Then his friend disappeared. Johnny Delacourte (aka Johnny D The Sax Machine) left the Army Rangers and the battlefields of Afghanistan six months ago. Then the friend disappears, the cops don't seem to care and the Russian mob is all over his ass. 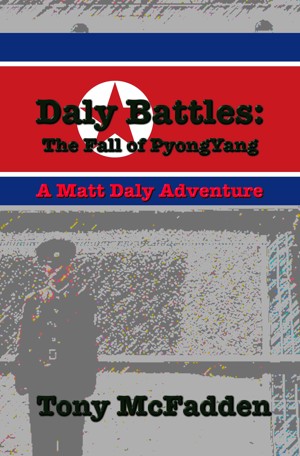 Daly Battles: The Fall of Pyongyang by Tony McFadden
Series: Matt Daly's Adventures, Book 2. Price: $0.99 USD. Words: 99,170. Language: English. Published: September 12, 2012. Categories: Fiction » Thriller & suspense » Action & suspense, Fiction » Thriller & suspense » Spies & espionage
It's all fun and games until you piss off the Supreme Commander. Matt Daly and his friend and business partner George Sahin are in Pyongyang, hired by its young leader, Kim Jong-un, to modernise and expand the local mobile phone network. Then a Twitter-fed revolution and a military uprising have them racing against time to prevent a hell Asia hasn't seen in seventy years. 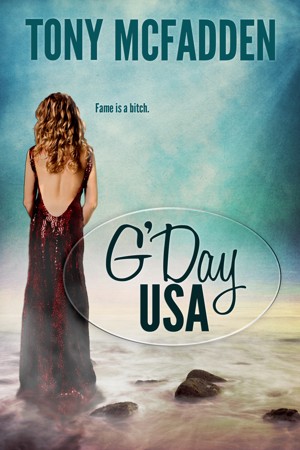 Australian actress Ellie Bourke's latest movie promises to be a blockbuster and the Hollywood A-list are clamoring for her services. Then an old enemy is found dead, evidence strongly implicates her in his death and she’s on the run from the killer who tells her she’s next. Ellie's life is turned upside down and she needs to depend on the odds and ends of Venice Beach to evade the killer.
View their profile to see all of their books