Published 2018-07-07.
When did you first start writing?
I was ten years old when I remember saying to myself that I wanted to be a writer when I grew up. At that tender age I began writing short stories on notebook paper, before graduating to a manual typewriter at the age of thirteen.
What motivated you to become an indie author?
For one I'm a control freak. As I saw more and more authors going that route I thought it would be cool to give it a try. I love being able to control everything about my book from the cover, to the release date, pricing, and everything in between.
What is the greatest joy of writing for you?
Being able to share my stories.
What inspires you to get out of bed each day?
My two-year-old grandson comes busting into my bedroom every morning and says, "hi!" Then he runs over to the bed with his little arms up so I can lift him into bed. He snuggles down between me and his sister for about two minutes, and then he's up again. He's a character. I watch him four days a week while his parents work. His older sister is in 2nd grade this year.
What are you working on next?
The final book I have planned for 2018 is ACE, a spinoff from The Sentinels, an MC romance that takes place in Daytona Beach Florida.

I have a new MC series planned for 2019, The Desert Rebels MC, which takes place in the Mojave Desert. Each member will get his own story and the series begins with COLE, who appears in Book 3 Nomad Outlaws Trilogy, FURIOUS.
What do your fans mean to you?
The fans are everything. I especially like when they write me, and I get to know them on a personal level. Most of them are very sweet, and will help make your book a success by spreading the news in their groups. I just finished my first trilogy because of my fans. After I wrote A Perfect Fit they wrote and asked me to write books for the other two brothers that were in A Perfect Fit. Surrender to Desire and Burning Hunger are the results.
When you're not writing, how do you spend your time?
Mostly with my family. I live with my daughter, son-in-law, and two grandchildren. My soul-mate of 17 years passed away in 2012 so I retired from Disney, and moved in with them. I have my own woman-cave in the house where I can retreat when I need quiet time. I have a few close friends that I'll meet once in a while for lunch or dinner.
Do you remember the first story you ever wrote?
I vaguely remember that it was a romance about a race-car driver, who died in the end. Was about ten hand written pages long.
Do you remember the first story you ever read, and the impact it had on you?
Rosemary Rogers, Sweet Savage Love! I was sixteen. I was shocked at some of the things she'd written about, and the vulgar language used, but it showed me that I could take my writing so much farther than I had up to that point.
Describe your desk
LOL, okay. It's a rocker recliner and a lap top. Oh, and I usually have at least 3 of my 4 cats somewhere on or around me at all times.
Smashwords Interviews are created by the profiled author or publisher. 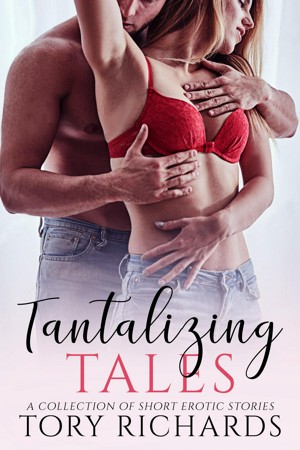 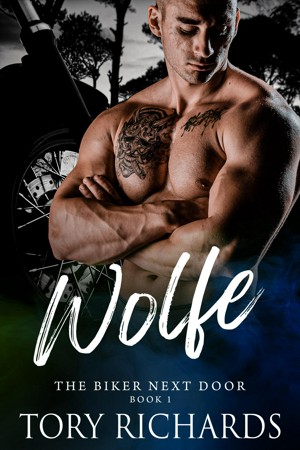 Wolfe by Tory Richards
Price: $3.99 USD. Words: 80,090. Language: English. Published: July 15, 2022. Categories: Fiction » Romance » Adult, Fiction » Romance » Suspense
Living next door to each other is torture. Wolfe wants Ella but he doesn’t have time for relationships. He had an MC to run. Anything permanent is off the table. Ella, a fun-loving extrovert thinks she’s okay with a no commitments kind of relationship. But being with Wolfe only makes her want him more. They should never have given in to temptation. Can they find a compromise for happiness? 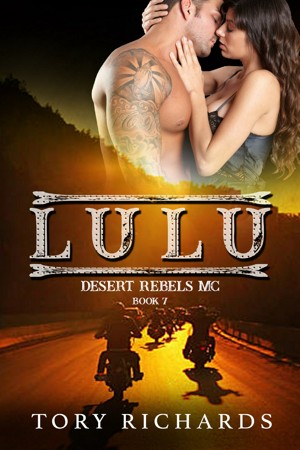 Lulu by Tory Richards
Series: Desert Rebels MC. Price: $3.99 USD. Words: 86,160. Language: English. Published: March 1, 2022. Categories: Fiction » Romance » Contemporary, Fiction » Romance » Suspense
For years Lulu hid out with the Desert Rebels as one of their club whores. A sweetheart to everyone, and a favorite with the brothers. But now the time has come for her to choose her own path and pay her own way. With their help she leaves her whoring days behind to start a new life. 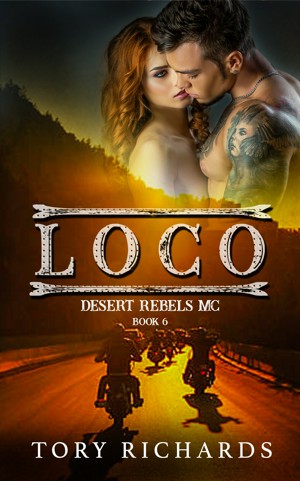 Loco by Tory Richards
Series: Desert Rebels MC. Price: $3.99 USD. Words: 88,600. Language: English. Published: October 6, 2021. Categories: Fiction » Romance » Suspense, Fiction » Romance » Adult
Known as the MC's man-whore Loco wears the title proudly. He's living the life, and has all the pussy he wants until a poolside goddess with copper hair and curves for days catches his eye. Their attraction is instant and off the charts and one night in Millie’s bed shows him that sex with the right woman could cure him of his roaming ways. Will he be able to change for her? 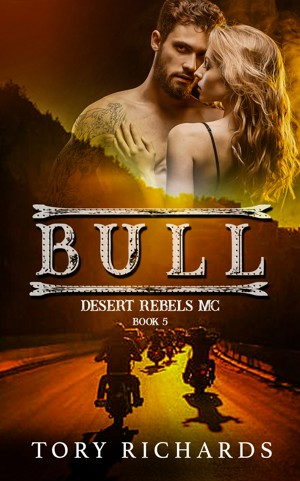 Bull by Tory Richards
Series: Desert Rebels MC. Price: $3.99 USD. Words: 99,680. Language: English. Published: January 29, 2021. Categories: Fiction » Romance » Suspense, Fiction » Romance » Adult
Bull plays as hard as he works in the MC, and he likes his life just the way it is. No commitments and a different woman in his bed every night. But a sweet little nurse catches his attention and before he knows it he's dealing with more than just trouble in the club. 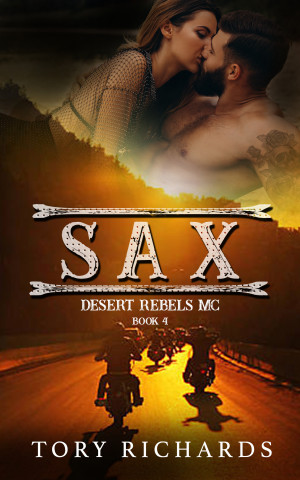 Sax by Tory Richards
Series: Desert Rebels MC. Price: $3.99 USD. Words: 81,430. Language: English. Published: July 15, 2020. Categories: Fiction » Romance » Suspense, Fiction » Romance » Adult
It had been a year since the woman Sax loved walked away. He'd thought Holly had been it for him, that he'd found something that would last a lifetime. But some things just weren't meant to be. After a year on the road, he returned to the Desert Rebels, ready to move on with his life without her...until she shows up...and with a baby. 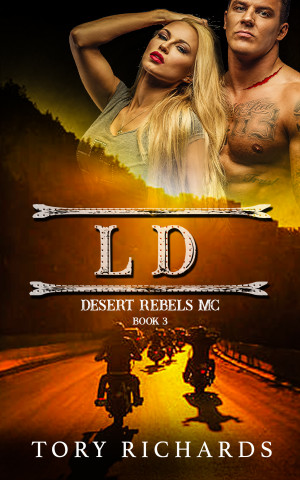 LD by Tory Richards
Series: Desert Rebels MC. Price: $3.99 USD. Words: 102,960. Language: English. Published: March 2, 2020. Categories: Fiction » Romance » Suspense, Fiction » Romance » Adult
She was a fucking goddess, the kind that men would go to their death willingly just for a taste of her. To see if the reality lived up to the fantasy. But I wasn't a man. I was a fucking monster. And her interest in me was going to be her ruin. The only thing I gave a damn about was my club, and my brothers. And I was going to show her just how fucking dangerous I could become. 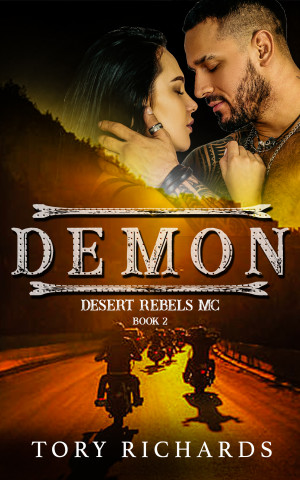 Demon is a known womanizer and a man with secrets, but he runs Desert Rebels with an iron fist. He had an old lady once. He doesn't want another one. A spirited club girl catches his eye, but fear of commitment forces him to push her away. Trouble and betrayal in the MC brings them back together, leaving him with a decision to make--either trust her and claim her or send her away for good. 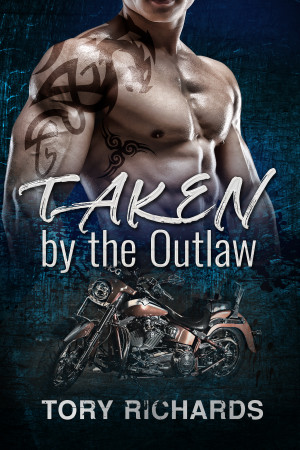 She was on the run. He might be her salvation. Would you give yourself to a stranger? Gwendolyn Myers never thought about it until she runs into Marcus 'Bowie' Ford at the Pink Pussy. A run-down hotel at the edge of town. She's on the run, but one taste of the sexy biker convinces Gwen that her running days might be over! 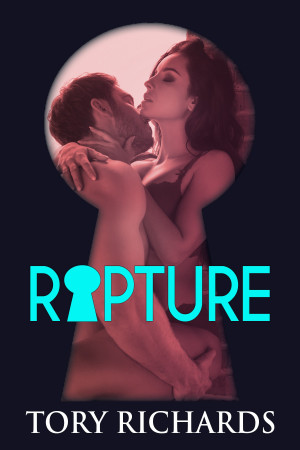 Rapture by Tory Richards
Price: $0.99 USD. Words: 18,540. Language: English. Published: August 9, 2019. Categories: Fiction » Erotica » Romance, Fiction » Romance » Short stories
Abduction. Deception. A sick initiation. He was working undercover. She was an innocent woman taken for him to prove his loyalty. But she's no stranger, and he's wanted her since moving in next door to her. He'll do what he has to, and keep her alive. But will she ever forgive him?
View their profile to see all of their books