Published 2017-06-04.
What do you read for pleasure?
I read taboo romance and erotica. My favorite books blend both bestiality and incest into one story, and has a reluctant protagonist that learns to love her new sexuality.
What is your e-reading device of choice?
I prefer the FB Reader because it's free, and it supports both epub and kindle books.
What book marketing techniques have been most effective for you?
I just recently published my first book, Daddy, Don't! I'm involved in a lot of incest and bestiality related groups, forums and chatboards. I talk about my writings with the people there, but otherwise I haven't found any other marketing technique for this specific genre. But I'm still learning, so maybe there's something out there.
Where did you grow up, and how did this influence your writing?
Although I hate stereotypes, I grew up in southern Alabama. I come from a large family that remains close. But it was my crush on my older brother that influenced me the most. I never had the nerve to hit on him, but I did, and still do, like to fantasize about him, and gawk at his chisled body when we're swimming at the lake.
When did you first start writing?
I've written off and on growing up, mostly poetry. But it wasn't until recently that I decided to try to make a career out of it. I gave copies of Daddy, Don't! out to several people in the business, and found tremendous support.
What's the story behind your latest book?
Besides my crush on my brother, I have fantasized about many family members, both male and female. There's just something about the wrongness of fucking your blood family that gets my motor running. Daddy, Don't! is actually one of my most reoccurring fantasies. I couldn't tell you how many times I took a shower, hoping my daddy would burst in and demand I give myself to him. Shower times are a lot of fun for me since I have a detachable shower head.
What motivated you to become an indie author?
After reading so much taboo smut, fingering myself to other people's fantasies, I felt the need to get my own out into the world. I want to be responsible for others' pleasure. I want to know men are stroking their cocks, and women fingering their pussies, to my fantasies, wanting the same things I want. Becoming an indie author has become one of my biggest turn ons.
What is the greatest joy of writing for you?
The greatest joy of writing for me is making myself wet, forcing myself to ignore my arousal until I finish writing and then spend the next hour making myself cum.
What do your fans mean to you?
My fans mean the world to me. I want to write stories that will make their cocks hard and their pussies wet. My job isn't done until my readers pleasure themselves to the erotic imagery of my twisted mind.
Who are your favorite authors?
My favorite authors are:
Brit Ducane
Elizabeth Thorn
Brandy Bestiality
Cate Aria
Barbie Lez
Lexi Lust
When you're not writing, how do you spend your time?
When I'm not writing I'm spending quality time with my german shepherd, Sparky, or with my boyfriend, wishing he were my brother instead.
Smashwords Interviews are created by the profiled author or publisher. 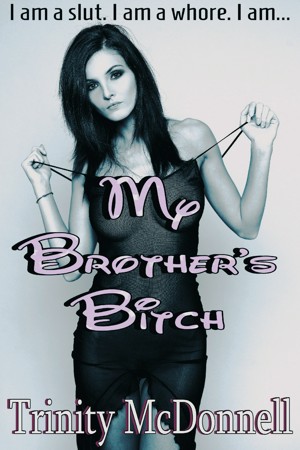 My Brother's Bitch by Trinity McDonnell
Price: $2.99 USD. Words: 6,730. Language: English. Published: January 8, 2021 by E B Books. Categories: Fiction » Erotica » Women's Erotica, Fiction » Erotica » General
Trish was in trouble. Her husband's gambling addiction just got her into hot water with her brother. With no money left, Peter puts his wife in the pot. If he loses, Trish must become Marcus's slave for twenty-four hours. Peter didn't understand; he simply didn't know that her brother was a pervert who had been waiting for the opportunity to sleep with his sexy sister. Now, Trish had no choice. 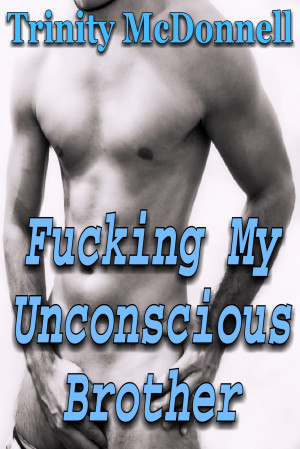 Fucking My Unconscious Brother by Trinity McDonnell
Price: $2.99 USD. Words: 2,410. Language: English. Published: July 7, 2019 by E B Books. Categories: Fiction » Erotica » General
Jessie had an unnatural attraction to her brother, Jamie. She knew that she could never tell him, that he would never return her taboo desires. That was when she came up with the perfect plan, wait until their parents go out for the night, steal her dad's horse tranquilizers and drug her sexy brother. With him unconscious, she could live out every incestuous fantasy, and he would never know. 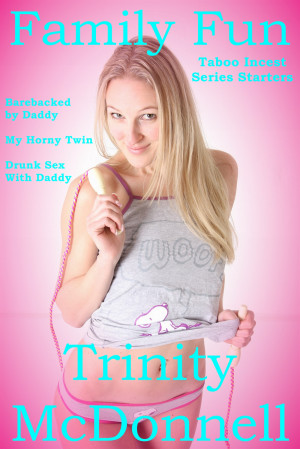 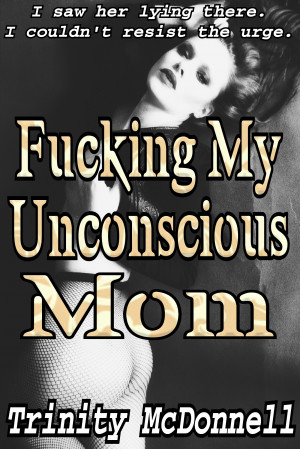 Mark always had inappropriate thoughts about his young, sexy mother, but when he walked into the living room and saw her alseep on the couch half naked, he couldn't help himself. He had to touch her, caress her, kiss her. When he realized that her drug addled brain would keep her from waking up, he decided to push the limits. He wanted to see how far he could go with his mom before she woke up. 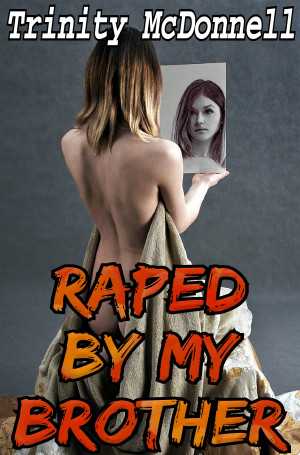 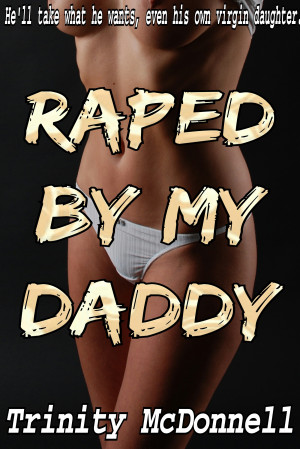 Raped by My Daddy by Trinity McDonnell
Price: $2.99 USD. Words: 2,180. Language: English. Published: January 19, 2019 by E B Books. Categories: Fiction » Erotica » General
It was an ordinary morning for Marie, doing the dishes. Until her sexually frustrated daddy walked in and saw her in her tight, wet t-shirt and shorts, hip-hugging boy shorts. He could no longer contain himself. Determined to teach her how a whore is supposed to act, he corners Marie. He doesn't care that she is a virgin. She belongs to him. 18+ Contains forced blood related incest. 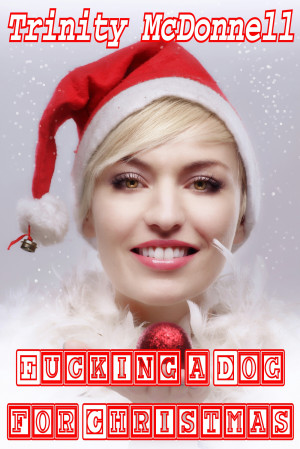 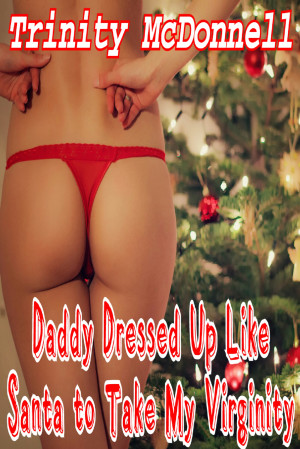 Daddy Dressed Up Like Santa to Take My Virginity by Trinity McDonnell
Price: $2.99 USD. Words: 4,260. Language: English. Published: November 30, 2018 by E B Books. Categories: Fiction » Erotica » General
Candace had an infliction; she had an uncontrollable desire to lose her virginity to Santa Claus. It was so bad, she confessed to her bestie, that she wasn't sure she could turn down her own daddy if he were dressed like Old Saint Nick. It was only an emphasis to show her desire for Santa. She didn't know Daddy was listening at the door. But when he snuck into her bedroom, dressed like Santa... 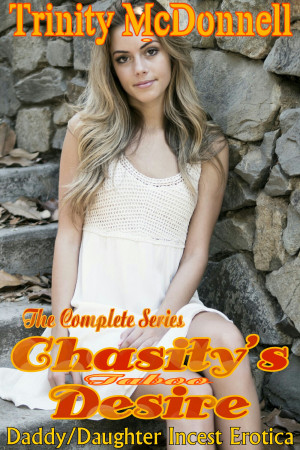 Chasity's Taboo Desire: The Complete Series by Trinity McDonnell
Series: Chasity's Taboo Desire · Discounted Incest and Bestiality Box Sets and Bundles. Price: $9.99 USD. Words: 29,420. Language: English. Published: November 16, 2018 by E B Books. Categories: Fiction » Erotica » Contemporary
Chasity found herself inexplicably attracted to her daddy and his surprisingly large cock. One drunken night of incestuous debauchery wasn't enough. She needed to lock him in and make him beg for more. By any means necessary, including her friend into the mix, sneaking behind her mom's back, having public sex or even breeding for him. He was her daddy, and she loved him, so nothing was off limits. 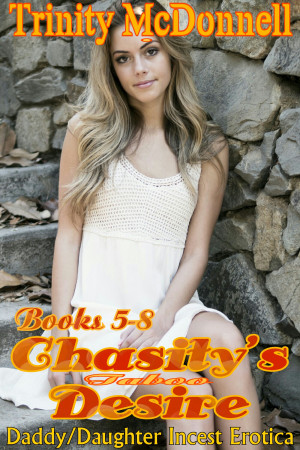 Chasity's Taboo Desire: Books 5-8 by Trinity McDonnell
Series: Chasity's Taboo Desire · Discounted Incest and Bestiality Box Sets and Bundles. Price: $7.49 USD. Words: 14,880. Language: English. Published: November 3, 2018 by E B Books. Categories: Fiction » Erotica » General
Chasity found herself inexplicably attracted to her daddy and his surprisingly large cock. One drunken night of incestuous debauchery wasn't enough. She needed to lock him in and make him beg for more. By any means necessary, including her friend into the mix, sneaking behind her mom's back, having public sex or even breeding for him. He was her daddy, and she loved him, so nothing was off limits.
View their profile to see all of their books