This interview has been viewed 266 times.

Published 2019-04-14.
When did you first start writing?
I have always loved reading, and even attempted some writing in my teens and twenties; however, working full time and raising two children became my priorities. It wasn't until I had an empty nest and the encouragement of my husband, that I decided to give writing another go-around. I told myself that I would write something every day, even if it was one or two lines. At first, I was ready to give up, but after a few weeks, I became obsessed with completing a story...and I did. Now, almost a decade later, I can't imagine my life without writing, and I guess over thirty novellas and novels is testament to that.
What is your writing process?
I love to write! My mind is always searching for the next plot of a story or an inspiration for a series. I'm always aware of landscapes, animals, smells, weather conditions, etc. I especially enjoy observing people. Many of my characters have their origin in actions I have observed, perhaps at the grocery store, on a walk, at a family gathering, at a BBQ with neighbors, at the mall. After the characters and a plot or theme for a series gels in my mind, the next step is simply to write and not worry too much about grammar or punctuation; just get the story on paper (computer). For me, writing early in the morning at a coffee shop is the most productive. I also have a desk at home with a wonderful view. After a story is complete, the hard work begins...editing. While writing the first draft of a story, my writing workday is usually over by 11 a.m. But during editing, I work 8 hours or more a day for about a month. But, like I said, I love to write. Rarely, does it become a chore.
Describe your desk
I have dedicated a bedroom in my home as my office and situated my desk so that it faces two windows. Because I live in the mountains, I have beautiful pine trees to inspire me, and outside my windows I have bird feeders and a bird bath. Woodpeckers, doves, sparrows, hummingbirds, and other aves I don't know the names of, make my mornings beautiful. Often they are joined by squirrels and occasionally a lone rabbit. With coffee in hand, I watch the congregation outside while plotting sagas for my latest series.
What's the story behind your latest book?
What a great question! I always love talking about my latest writing adventure. After I finished a series I began three years ago, titled "Finding SOMEWHERE," with the final book titled "SOMEWHERE to Fall in Love" (which is my take on the Beauty and the Beast theme), I was contacted about participating in an anthology featuring women of the Old West. When the person overseeing the project had to cancel because of illness, I had almost completed my story. Since I loved the tale, I decided to publish it myself and turn it into a series. The first book, "Violet's Vindication," was published a few months ago, and now I'm putting the final touches on the second book, "Priscilla's Pride," which will release in June, 2019. The stories are only 80 to 90 pages, but packed full of adventure, emotion, and challenges for the heroes and heroines. I have titled this series, "Journeys of the Heart."
What motivated you to become an indie author?
My first two books were published by a small independent publisher and I will always be grateful for the opportunity given. At the time, however, self publishing was becoming popular, and because controlling my own work seemed important, I decided to give it a try. AND LOVED IT! I can design my own covers, set my own prices, determine when I want to place something on sale or give it away for free, and edit anything in a story I'm not happy about.
How has Smashwords contributed to your success?
I LOVE SMASHWORDS! It took me awhile to get the formatting right, but once I did, it was game on. SW creates the formats needed for online retailers, so I don't have to go to each one individually and mess it up. And the cost for all of this is so reasonable. It comes right out of the selling price. I also love the preorder option that allows for upload of the story shortly before the launch date.
What is the greatest joy of writing for you?
My greatest joy is enjoying a cup of coffee, while living in an alternate reality for a portion of my day. In that reality, I can become anyone and experience whatever I desire. I can travel the world...and I have. My favorite places are small towns and the island of Santorini. I can also live in any time period I desire: past, present, or future...and I have. What's better than that?
What do your fans mean to you?
I love hearing from readers! Whether the emails are complimentary or constructively critical, it matters not. I listen to what is said and often use readers' suggestions for new stories. Case in point: Candy Kisses (Romance on the Ranch Series #4). For that story, I received an email suggesting that a terrible person in book #3 become the heroine in the next, and I was shocked. But the more I thought about it, the more I became convinced that this unlikable woman could be the perfect example for forgiveness and starting over.
Who are your favorite authors?
Some of my favorite authors are: Susan Elizabeth Phillips, Catherine Anderson, Dan Brown, Mary Balogh, Robyn Carr, Bev Pettersen, J.R. Rain, James Rollins, Sarah Schofield, Eric Clay, Theodosia Greene, Maggie Shayne, Sondra Allen Carr
Smashwords Interviews are created by the profiled author or publisher. 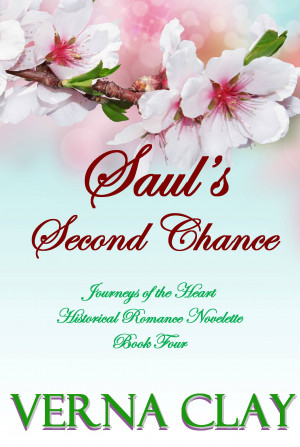 Saul's Second Chance by Verna Clay
Series: Journeys of the Heart Novelettes, Book 4. Pre-release—available August 28, 2020. Price: $2.99 USD. Language: English. Categories: Fiction » Romance » Western, Fiction » Romance » Historical
For years, Saul has tried to atone for his wild youth by being responsible and neighborly, and he's proud of that, but maybe the deck is stacked against him when it comes to having his own family. His new friendship with the owner of the town's first bookstore is refreshing and surprising. Unexpectedly, he finds himself attracted to the spinster. 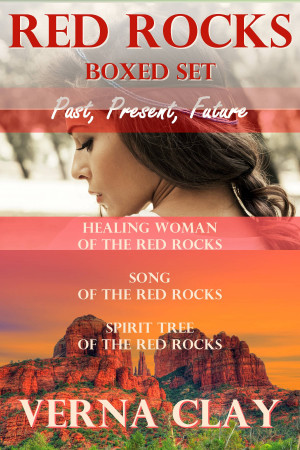 Red Rocks Collection (Past, Present, Future) by Verna Clay
Price: $6.99 USD. Words: 115,700. Language: English. Published: March 13, 2020. Categories: Fiction » Romance » Western, Fiction » Romance » General
PAST: Tana Raven Sees lives below red monoliths and is often visited in dreams by her deceased grandmother, who foretells of a man that will seek her out...and make her cry. PRESENT: Since her music career is on hold, Sunny Sundance drives to Sedona, Arizona, with the intent of buying back her family's homestead. FUTURE: Awakened from cryogenics, Dr. Violet Morningstar holds the key to the future. 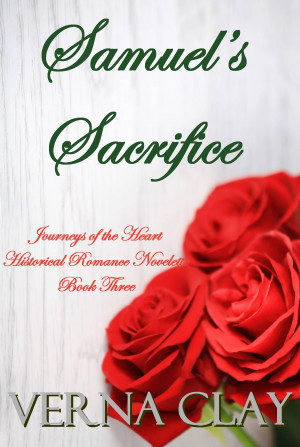 Samuel's Sacrifice by Verna Clay
Series: Journeys of the Heart Novelettes, Book 3. Price: $2.99 USD. Words: 19,720. Language: English. Published: March 29, 2020. Categories: Fiction » Romance » Western, Fiction » Romance » Historical
Samuel Johansson is blindsided when his twin brother, Saul, confesses to having advertised for a mail order bride, but now wants to renege on his offer of marriage. When Saul asks Samuel to marry her in his stead, Samuel's response is an unqualified NO. However, when he meets the lady everything changes. His rescue instinct begs to differ with his rational mind. 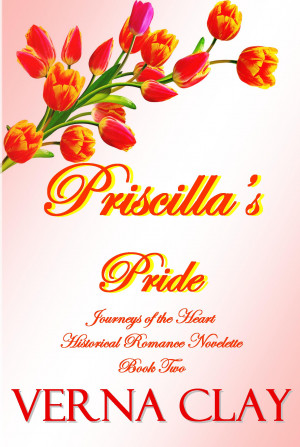 Priscilla's Pride by Verna Clay
Series: Journeys of the Heart Novelettes, Book 2. Price: $2.99 USD. Words: 20,050. Language: English. Published: June 22, 2019. Categories: Fiction » Romance » Historical, Fiction » Romance » Clean & wholesome
Priscilla Johansson, daughter of Violet Hailey from book one, "Violet's Vindication," is grown up and anticipating her life as a teacher in her small community outside of Santa Fe, in New Mexico Territory. She also hopes to one day marry and raise a family there. However, her life takes a drastic turn when she embarks on a future she never envisioned. 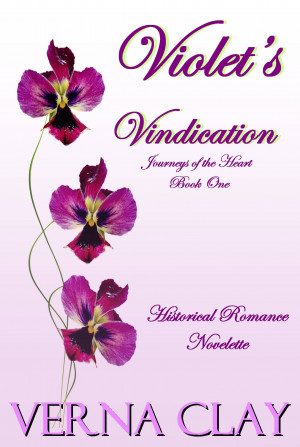 Violet's Vindication by Verna Clay
Series: Journeys of the Heart Novelettes, Book 1. Price: Free! Words: 17,090. Language: English. Published: November 28, 2018. Categories: Fiction » Romance » Historical, Fiction » Romance » Western
Violet Hailey, an unwed mother, longs to begin life anew. After selling her family farm to the Railroad Commission, she joins a wagon train under the guise of being a widow. A few days into her journey along the Santa Fe Trail, her wagon breaks down and she must accept help from an uncouth cowboy. 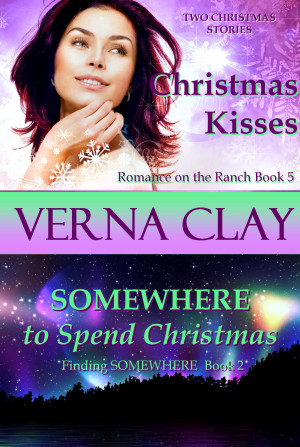 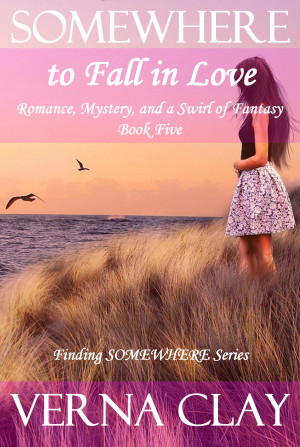 Somewhere to Fall in Love by Verna Clay
Series: Finding SOMEWHERE, Book 5. Price: $3.99 USD. Words: 38,930. Language: English. Published: September 15, 2018. Categories: Fiction » Romance » Fantasy
WELCOME TO SOMEWHERE, OREGON Nestled in a cove on Oregon's coastline, the town of Somewhere is charming, picturesque, inhabited by townsfolk who love their community—and teeming with mystery. You are invited to join the heroes and heroines of Somewhere as they solve mysteries, discover romance, experience inexplicable phenomena, and fight injustice—just the usual stuff! 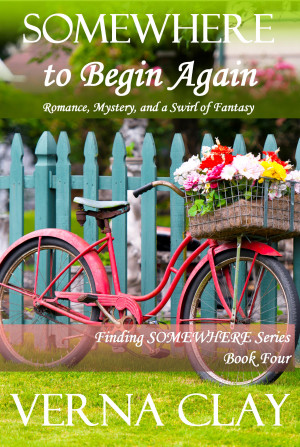 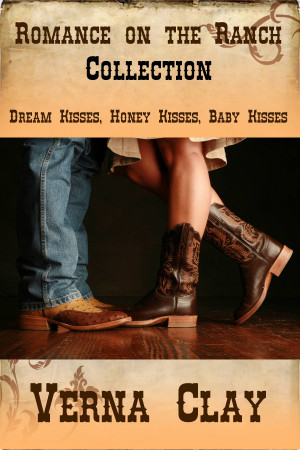 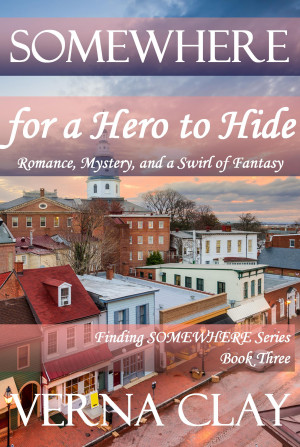 Somewhere For A Hero To Hide by Verna Clay
Series: Finding SOMEWHERE, Book 3. Price: $3.99 USD. Words: 44,150. Language: English. Published: August 25, 2017. Categories: Fiction » Romance » Paranormal, Fiction » Romance » Contemporary
WELCOME TO SOMEWHERE, OREGON Nestled in a cove on Oregon's coastline, the town of Somewhere is charming, picturesque, inhabited by townsfolk who love their community—and teeming with mystery. You are invited to join the heroes and heroines of Somewhere as they solve mysteries, discover romance, experience inexplicable phenomena, and fight injustice—just the usual stuff!
View their profile to see all of their books