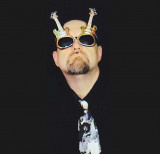 Published 2019-03-30.
What motivated you to become an indie author?
Thorough disgust with conventional publishing, really. When I was shopping Wish You Were Here around to agents, none wanted to read it. The reason stated (when they bothered to state a reason) was that it was too long. The book is long, I admit, being a bit past 300,000 words. But it's fantasy. People expect long books in that genre. I was advised to cut it in half, but that wasn't possible without turning it into a very different story, so I went indie.

In the end, indie publishing suits me more, since I'm pretty much a control freak, anyway.
What's the story behind your latest book?
Ever since I was a kid, I've loved comic books. Superhero comics, specifically. But after so many years, I got tired of the "standard" sort of superhero story. I liked reading the stories that were intensely personal, with the emphasis on how the characters are affected by the events, rather than the events themselves. These stories certainly exist out there in comic book world, but they're the exception.

Hence, The Many Deaths of Dynamistress, a deeply personal story of a woman who manipulates her own DNA to gain superhuman abilities. But it's not a story about being a super-powered character. It's the story of the woman who just happens to be that person. There's enough action to satisfy the more conventional superhero fan, but that's not its focus. This is a trilogy of books: Reckoning, Redemption, and Renaissance.
What are you working on next?
As of this moment (August 2017), I'm working on the final Dynamistress book, titled Renaissance. Following that, I've promised my fans that I'll finally do the sequel to Wish You Were Here (which I've always envisioned as a trilogy, also).
How do you approach cover design?
Cover design is really important to me and I'm very fortunate to be good friends with more than one talented graphic designer. I come up with the concepts and they make them happen, sometimes adding a twist on my idea that improves it greatly.

Probably the best example is the cover for my 2004 novel, One Nation Under God (which is unfortunately not available via Smashwords). It shows a section of the U.S. flag in the process of having the stars replaced by Christian crosses. The title appears in a font that looks like police "do not cross" tape. My artist's choice of font really brings it all together.

I have no fondness for covers that don't reflect something about the story, and I see an awful lot of those from conventional publishers, today. What a waste.
What do your fans mean to you?
I can't even begin to tell you. They mean so, so much. To receive an email from a total stranger telling me how much they loved my book... that's an amazing feeling. One of the reviewers of my second novel, I swear, reads a book a day. And she said one of mine was the best book she read in 2006. To this day, she's a huge promoter of my work.
What do you read for pleasure?
I have little free time for pleasure reading, really. Most of what I've read over the past several years has been research for the Dynamistress books. But when I do have time, I read a lot of science fiction and some fantasy. Not exclusively, but primarily.
Describe your desk
My desk is cluttered with all kinds of stuff... books, office supplies, pictures, and so on. But the desk itself is awesome. It's from a company called Legare. Made of bamboo. And it's all interlocking pieces, with no tools required for assembly. Once clear of clutter, I can take the desk and hutch apart and put them back together in under five minutes.
What is your writing process?
Well, not to be cliche about it, but my process is pretty organic. I'm not much of a plotter; I don't typically have outlines before I write, nor do I usually have more than a general idea of where the story will ultimately go. I allow it to flow naturally, I suppose. Now, there are certain rules I follow, of course, so that I don't stray too far or go off on too many tangents. And I'm critical in the re-writing phase. But I've found that this style works for me, and some of the tangents have resulted in very powerful scenes.
What is the greatest joy of writing for you?
I suppose my answer should be something like, "the joy my work brings to others." But, while that's certainly true, I ultimately write stories that I would want to read, with characters that mean something to me. When I write a scene that makes me get emotional, that's probably the greatest feeling.
What's the hardest part of writing for you?
It's not the writing part, but what happens after: marketing. I can't stand it. I'm not good at it. I hate having to spend so much time on trying to spread the word about my books when I could be spending that time writing the next one. I realize the world of publishing isn't like it was 50 years ago, but it still bugs me.

And that's why you've never heard of me or my works, before!
Where did you grow up, and how did this influence your writing?
I grew up in a small, rural town called Brockway, Pennsylvania. It was, in some ways, stereotypical of such places: quiet and safe with generally friendly people. Because of this, I think, I tend to write stories that - though filled with plenty of darkness - ultimately show the goodness in people. Even the not-so-good ones.
How has being a writer affected your everyday life?
I find that books and movies are no longer as enjoyable to me. Since I think like a writer, I'm more aware of the flaws in the storytelling, be they plot holes, predictable storylines, or transparent characters. American movies are probably the worst, because they're so formulaic.

Just yesterday, in fact, I was watching a show in which two characters were sitting on the floor after an intimate moment. And I thought, "They will now be interrupted by a visitor at the door or a phone call." Sure enough, not a minute later, there was a knock on the door.

I remember seeing a particular movie (I won't name it) during which I was completely enthralled in the first 20 minutes. I was actually excited, because it was looking like this was going to be a complex, multi-layered story told in a very cool way. But then the story rapidly devolved and became just another piece of Hollywood crap. It was so incredibly disappointing, because there really was a great story to be told, there. But it never was. The movie bombed, by the way, so apparently I wasn't the only one who felt this way.

So there aren't as many surprises for me, anymore. And there's a lot more disappointment.
What inspires you to get out of bed each day?
The urge to pee, generally.
Smashwords Interviews are created by the profiled author or publisher. 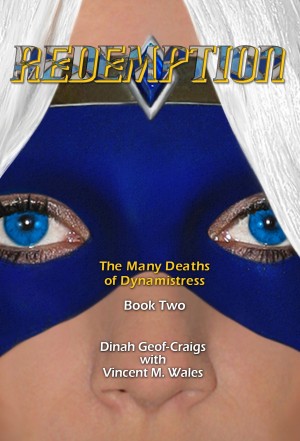 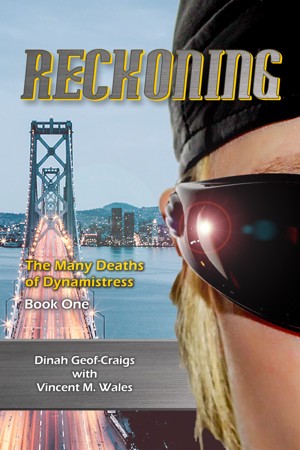 Reckoning by Vincent M. Wales & Dinah Geof-Craigs
Series: The Many Deaths of Dynamistress, Book One. Price: $2.99 USD. Words: 111,950. Language: American English. Published: October 1, 2013. Categories: Fiction » Science fiction » General, Fiction » Graphic novels & comics » Superheroes
The only thing young Dinah Geof-Craigs wanted to be when she grew up was a famous, super-powered metahuman. But puberty came and went without the genetic gift she felt she deserved. So she determined to correct Mother Nature's "oversight." Even if it killed her. Reckoning is the first book in the superhero trilogy, The Many Deaths of Dynamistress. 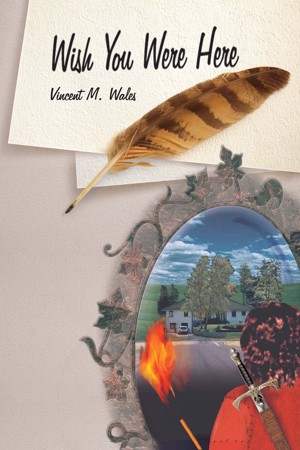 Wish You Were Here by Vincent M. Wales
Price: $2.99 USD. Words: 303,460. Language: English. Published: April 30, 2013. Categories: Fiction » Fantasy » Contemporary, Fiction » Fantasy » General
When a teenage boy from modern Earth is mysteriously transported to an alien world, his contemporary attitudes and beliefs are taken to task. This is the story of his coming-of-age in a world of magic and monsters, facing adventure, tragedy, fame, fortune, romance... and a search for a way home.