Published 2017-05-25.
What made you want to start your own theater company? Was it worth all the effort to start something that big from scratch instead of concentrating on performing?
For 15 years before Debra Wise and I started Underground Railway, I acted in regular plays––everything from Shakespeare to Beckett, The Fantasticks to Brendan Behan’s The Hostage. I enjoyed a lot of that work. Maybe not so much Oh Dad Poor Dad, Mama’s Locked You in the Closet and I’m Feeling So Sad and its ilk. But when I started to direct, I began to want not just to do plays well but to make mean something as human documents. I also grew impatient with the limits of realism, which dominates the American theater, and longed to widen the palette of styles in which stories are told.
When Jerzy Grotowski came along in the 70s, asserting that the actor was not just a performer of plays already written, but a poet who could create his or her own plays, I joined an experimental theater company on the model of Grotowski’s theater laboratory with Herb Blau, Bill Irwin, Julie Taymor, Sharon Ott and other particularly creative theater people, I began to see how a theater company could make its own plays out of actors’ improvisations in collaboration with playwright. That new idea of a theater endured; it is the idea Underground Railway pursued for the first 25 years of its history. It was a sufficiently radical idea that we could only pursue it by building our own institution to give it room to grow and prosper. That is the story this book tells.
Why should I want to read a book about a theater company whose productions I have never seen?
Excellent question. In fact, that was the very question that made me decide to write this history/memoir as an ebook. There are 13 montages of video-excerpts from productions by Underground Railway Theater in the ebook, so that readers can get a sense not only of what we made plays about in those first 25 years, but what those plays looked and sounded like. This seemed especially important because the theater’s unique mix of acting, puppetry and music needed to be seen and heard to be appreciated and understood. To give you just one example, at the end of the first act of our play Sanctuary: The Spirit of Harriet Tubman, a giant head of Tubman rises behind and above the set in profile, accompanied by her giant hand, pointing north. This figure is the backdrop for Act Two, which takes place in 1986 Chicago. When, at the end of the play, a sanctuary church in Chicago has accepted into its protection a Guatemalan refugee named Joachim, the giant head of Harriet turns toward the audience and the face transforms into that of a Guatemalan woman, as the cast sings the “Harriet Tubman” song by Walter Robinson.
What are you working on next?
Turning the best of my puppet and storyteller plays,"The Vision of Dreaming Branch," into a book for young people with accompanying CD or DVD (not sure which, yet). The play won the highest award given by The International Union of Puppetry, was translated into French and performed at Geneva, Switzerland's state marionette theater, and represented the U.S. in a Puppetry of the Americas Festival held at the Atlanta Puppetry Center.
Smashwords Interviews are created by the profiled author or publisher. 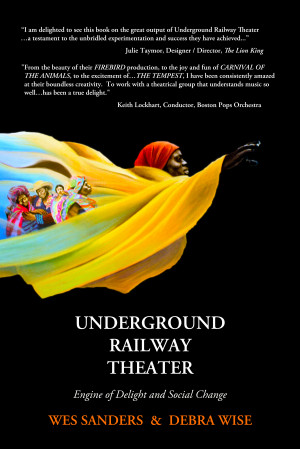 JULIE TAYMOR: "I am delighted to see this ebook on the great output of the Underground Railway Theater...a testament to the unbridled experimentation & success they have achieved." Written by the founding co-directors, with VIDEOS of PERFORMANCES combining ACTORS, PUPPETS & MUSIC in the DEVISING OF ENGAGED PLAYS from improvisation, it also includes PUPPET-COMMISSIONS from orchestras like the BSO