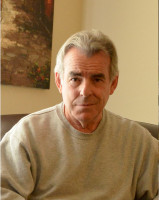 Published 2015-04-15.
Describe your desk
It's glass top and L shaped.
Where did you grow up, and how did this influence your writing?
I was born in San Francisco, but when I was two years old my family moved to the suburbs in Redwood City. My family was very dysfunctional. My father was an alcoholic, while my mother had a character disorder. In spite of their issues they were very religious so they sent us to a Catholic school, where nuns picked up where my parents left off. I can't speak for my sisters (I had no brothers), but this unbalanced view of reality certainly fueled my curiosity for another point of view.
When did you first start writing?
I was fairly young. I had to write a composition for an assignment in grammar school. I can still see myself looking down at the paper writing, but it felt I'd drifted into a boundless world. I never felt comfortable in school, but I felt free there. I was drawn to words and phrases. They felt powerful when I arranged them in a certain way. However, when I finished writing my composition, feeling exhilarated, I went to my mother, apparently seeking some kind of approval. She quickly castigated me for leaving "is" out of a sentence. She followed up with her usual, "You stupid kid you'll never amount to anything." Her repetitive denunciations stayed with me for a long time, but eventually I worked through them.
What's the story behind your latest book?
As you know with most stories there's a beginning a middle and an end. I created a scenario where the protagonist hadn't lived a life yet. So essentially he was starting from a clean slate. I wanted the character to fully experience what it means to be human, but I didn't want to write just from just a male's point of view or a female's. I wanted this individual (Noadiah) to fully understand human life as a man and as a woman. It wasn't important if the life he lived was of either sex, but how he dealt with adversity and how his character was affected by the experiences.
What motivated you to become an indie author?
Please forgive me if this reads pretentious and perhaps they (agents) write this in responsive to all submissions.
Literary agents wrote: "your work sounds interesting" (obviously not enough to want to represent me).
Another wrote, "I found your presentation compelling." And still from another agent "...you have a very unique, interesting plot. It has a great deal of depth to it..." This same individual went on to say that, "...it is a bit too far fetched" (even though I sent only ten pages).
I'm determined to get this book published, really not for me (to be famous), but as I've written, to contribute a verse to the conversation in what it means to be human.
How has Smashwords contributed to your success?
On one hand, I'm able to have the book available to numerous outlets, and yet since it hasn't sold (although it's only been a couple of weeks), I haven't received any feedback (if the reader(s) like(s) it) yet.
What is the greatest joy of writing for you?
Boy "Joy" really hits the mark more than you know!
I was going through a difficult moment in my life. I was told to "Find Joy in Solitude."
I didn't fully realize that edict until I was sitting on my bed in a little studio in Paris (I know cliche, once again forgive me) with my computer on my lap writing the life of Sophie when it came over me. I felt I was taking dictation and asking the character (Sophie) to slow down I can't type that fast.
What do your fans mean to you?
That is so sweet of you to ask that question, but I don't have any fans:-(
What are you working on next?
My next book is called Radio Frequency. It's about the people I've met in my forty years in broadcasting, names have been changed of course.
Who are your favorite authors?
I liked Barbara Kingsolver's book The Poisonwood Bible, Dostoevsky's Crime and Punishment, and Frank McCourt's Angela's Ashes.
What inspires you to get out of bed each day?
In all honesty (as I have tried to be with your questions), it takes awhile to get out of bed each day. I Like my bed.
When you're not writing, how do you spend your time?
I like and sometimes love films.
How do you discover the ebooks you read?
Through various sites.
Do you remember the first story you ever wrote?
While living in New York, I narrowly escaped with my life and the man I pulled with me when a car flew over the hood of another and through a wall; what had transpired and people's reaction to the driver pretty much wrote the story for me.
What is your writing process?
I generally write at night. I have music from film soundtracks (strictly instrumentals) playing quietly.
Smashwords Interviews are created by the profiled author or publisher. 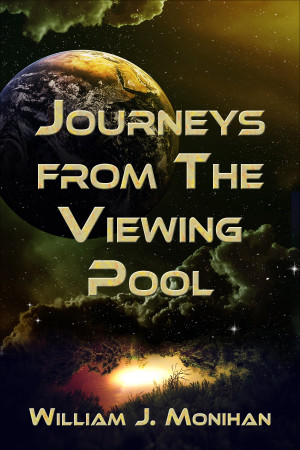 Journeys from the Viewing Pool by William J Monihan
Price: $9.99 USD. Words: 115,220. Language: American English. Published: March 17, 2015. Categories: Fiction » Literature » Literary
They were an essence within the wellspring of Life. Iliana felt that their Essence needed a Broader Spectrum of Light. Noadiah wanted to research, to see if the "Light" would affect their Essence. She reassured him they were in love and she'd return. Alone and lost he sought help from a monk. Later he met Joshua, who suggested a different path. This is the story of his Journeys to find his Iliana