My life got its start back in 1945, so I am an old geezer by now! I grew up in the foothills of the Cascade mountains in southern Oregon, USA. My secular education took place in a small, country school in the community of Days Creek, Oregon. All twelve years, same school! Between my junior and senior year my Mother suffered a stroke. In order to facilitate her recovery, she needed to be in a convalescent home in Roseburg, Oregon, about 55 miles away from our home. Dad stayed in Roseburg where he could make daily visits to my Mother, so I lived by myself and supported myself by working week-ends on a turkey ranch during my last year of high school.
After high school, I went to work full time to help support my aging parents.
My first job after high school was in a plywood manufacturing plant and I stayed there for 10 years. About a year after graduating from high school, I was married for the first time. We had 3 children. However, the first one died in infancy. The other two grew to be fine, upstanding adults and have families of their own now. The result is a total of 5 grandchildren, which includes my current wife's grandson.
After leaving the plywood plant work, I worked as a route driver for a garbage company for the next 8 1/2 years. Next, I started my own business and worked for myself for a little over 8 years; then, moved to the Oregon coast and began driving commercially again for a couple of different companies plus doing a stint of cab driving. The last 7 years before retiring, I was employed as a route driver for Oregon Oyster Farms, Inc. (The best place I ever worked) They treat their employees so well, I really hated to give it up, but, the old knees and other joints start to wear out after awhile.
After retiring, I became aware of a need for supplemental income, so I started another business of sorts, rejuvenating wrist watches (self-taught) and selling them on the internet. Also, I wrote some short stories and and a small book for seniors needing to raise supplemental cash. (This book is now out of print to get some updating.)
I now live on the Oregon coast, doing some writing and am still selling restored wrist watches via the computer. 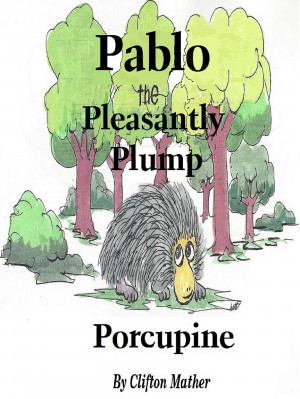 Pablo-The Pleasantly Plump Porcupine by Clifton Mather
Price: $0.99 USD. Words: 1,990. Language: English. Published: December 15, 2016. Categories: Fiction » Children’s books » Animals
A neat story about a family living in Pine Point Forest teaches an important principle to young readers as well as others. Meet Pablo, his Mom and Dad, Pedro and Patsy, and see what can happen when one listens to rumors.

You have subscribed to alerts for Clifton Mather.

You have been added to Clifton Mather's favorite list.

You can also sign-up to receive email notifications whenever Clifton Mather releases a new book.