Alfredo Diaz was raised near Alton in the Rio Grande Valley of Texas. He was stationed with the U.S. Army at Ft. Riley, Kansas and the Panama Canal Zone. After military service, he earned a B.A. in Environmental Studies at Southwest Texas State University, and a doctorate in education from the University of Houston. He has worked in the field of public education as a teacher and assistant principal in Houston area schools for twenty years. For questions or comments, contact Alfredo (Fred) Diaz at dontspeakspanish2015@yahoo.com.

What's the story behind your latest book?
As a teacher and assistant principal over the past twenty years, I have felt a need to intervene on behalf of Latino students that were being subjected to discriminatory treatment at the hands of school personnel. I expected that the worst treatment was a thing of the past, especially after moving to a supposedly more progressive inner-city school district. I was shocked to find rampant xenophobia alive and well as late as 2012. For this reason, primarily, I decided to write this personal narrative in order to expose the unacceptable behavior. I pinpoint the source of the misunderstandings and false assumptions made by some school personnel that allows it to remain unchallenged. Additionally, I assert that a school's disciplinary problems are linked to an erroneous socio-adaptation theory.
What is the greatest joy of writing for you?
I hope to do for others what writers have done for me, that is, to consider something that I had failed to consider before. Sometimes those experiences and beliefs are there, but they don't take full form until you find that others have described them as well. I want to plant a seed in in the minds of parents, teachers, and students through this writing effort, but hopefully in an entertaining, yet instructive, way. I can envision people laughing at times-- especially at some of the school discipline-related incidents that I describe.
Read more of this interview. 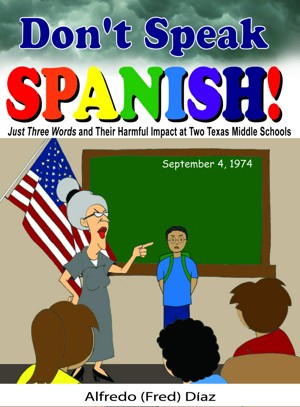 Don't Speak Spanish! Just Three Words and Their Harmful Impact at Two Texas Middle Schools by Alfredo Diaz
Price: Free! Words: 51,280. Language: English. Published: May 3, 2015. Categories: Nonfiction » Education & Study Guides » Behavioral management, Nonfiction » Education & Study Guides » Multicultural education
By the 2005-2006 school year, Jacobson Middle made an incredible transformation from one of the most violent inner-city schools to a relatively stable environment. In this personal narrative, I recount how the initial stabilization phase was achieved, and what contributed to its decline in 2010. Just three words hold the key to understanding the causes of student disengagement at Jacobson Middle.

You have subscribed to alerts for Alfredo Diaz.

You have been added to Alfredo Diaz's favorite list.

You can also sign-up to receive email notifications whenever Alfredo Diaz releases a new book.