It was a very windy day, when I was born.
It was 1978 - a century has gone, it seems.
I'm a writer, psychologist, photographer and I'm always here, adoring Art.
Writing is music, words are note (maybe a piano? Often an orchestra).
And photography means "writing of light", so here we return.
Now my life is frozen, my body is keeping me still, but I'm trying to come back.
I have plenty of ideas to realize.
There is so much beauty in the world...
I have to conquer a little part of it.
So, I'm here with my words.
I'm an unknown novelist with my own voice - not a great name, but I've got the dignity of my thoughts and feelings. I think we all have the right to express ourselves - the wonder of being us, always.
I won literary contests and I published some books, but creating imagines through the sound of lyrics, prose or not, goes further, I know.
So
I'm
Here.
From my corner - is it so important where it is?
I'm a citizen of the whole, I hope.

Nice to meet you.

Describe your desk
I know.
It's not prefessional, but.
I have plenty of desks, and it is not a joke.
Now I have to use bed/couch, but I have "normal" wooden chaotic desks, and I had also better ones: a sandy one, near the sea (it reached me to see what I was doing); a rock, in a corner of a mountain; a bench, somewhere; a silent library; my knees.
Each of them has a peculiarity: it is a mess, anyway. Objects of all kind and ideas all around. I sometimes forget them both.
When did you first start writing?
I think before I learnt to write.
I was a little story teller. My voice was my ink.
As psychologist, I know it's a different brain work, but for me it's the same. It was, when I was a child.
Then the school.
And then I asked my first typewriter; I was seven.
My parents gave me one. It was old and so noisy, especially in the mornings, that they decided it was better a pen.
It was a nice pen.
Read more of this interview. 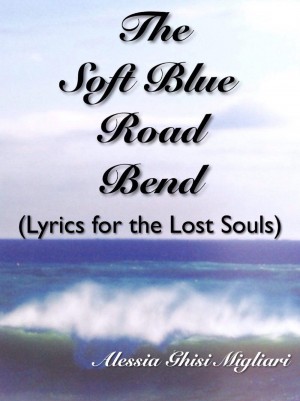 There was a soft blue road bend. When you saw it, light changed you, the moment of bliss we all want. Then something happens. Now you are a lost foreign soul. And you create this little chant/song/short story/poetry, you choose what it is. There is light, hope, a road, the bend. A fall and the will to return. With words or lyrics... it is for you, for us all. It has a melody. It is our melody.

You have subscribed to alerts for Alessia Ghisi Migliari.

You have been added to Alessia Ghisi Migliari's favorite list.

You can also sign-up to receive email notifications whenever Alessia Ghisi Migliari releases a new book.