Today, Art Garfield is a veteran comedian, actor, producer, director, writer, and voice-over artist. He began his career in stand-up comedy while attending Alabama State University as house M.C. at the Punchline Comedy Club in Montgomery, Alabama. Originally from East Elmhurst, Queens-New York and currently residing in Harlem, he has traveled the nation performing in the top comedy clubs, and on television on HBO'S Def Comedy Jam, Uptown Comedy Club and Showtime At The Apollo.

He made the natural progression from performer to writer with humorous award winning campaigns in advertising for the radio featuring Barry White for Anhueser-Bush Bud Light; and American Express/Money Gram, winning the coveted Mercury Award and London International Festival Award respectively for each campaign.

Art Garfield also created and wrote award-winning TV commercial campaigns for super-star comedians Steve Harvey, Bernie Mac and Tony T. Roberts, for Pepsi and Burger King.
He's appeared in numerous films and commercials as an actor (Mo Money, Boomerang, Wendy's and more...) but writing became his passion. He's even tackled comedy writing for morning radio in the tough New York City market at #1 urban hip hop station Hot97 where he wrote for the Miss. Jones in the Morning Show and was known for his hilarious prank telephone calls.

He's hit home runs with his every writing effort in sitcom, TV commercials and morning drive radio. With this being his first book we expect nothing less than another smash hit! The future holds more intriguing and revealing book projects from this well rounded talent, so stay tuned!

Where to find Art Garfield online 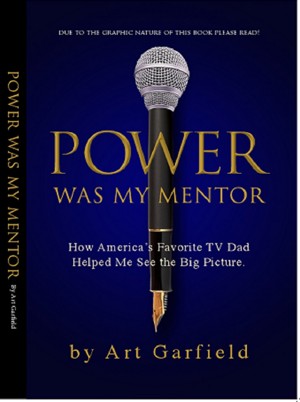 A true story of how Art, an unknown comedian/aspiring writer was uniquely plucked from obscurity and mentored by the legendary entertainer Bill Cosby. Hired as the audience warm up comedian and fired by producers perturbed that he was given an opportunity by Cosby to watch "their" show in-process as an insider. Facing adversity, he challenges his will and pride against their authority and hatred.

You have subscribed to alerts for Art Garfield.

You have been added to Art Garfield's favorite list.

You can also sign-up to receive email notifications whenever Art Garfield releases a new book.