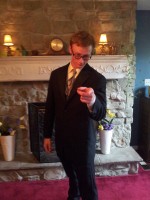 Dominic Sceski is a home-schooled high school student. He wrote his first story when he was seven, and he's loved using his free time ever since to create epic, fictional worlds. He enjoys watching himself grow both as an author and a person through his writing, and he hopes he will always be able to continue writing throughout his life.

Do you remember the first story you ever wrote?
I do! I wrote my first story when I was seven, and it was "twenty-three" pages long. I say "twenty-three" because it technically wasn't that long. I left lots of room for pictures, just to make it seem like it was longer.
The story actually instigated a novel that took me another seven to eight years to finish. I kept the same plot, but obviously many things changed (including the size of the novel). The story/novel was about a knight whose little brother was kidnapped by a group of monsters (called Gilliks), and he had to rescue his little brother before the monsters turned him into one of them. The novel, although it's not published yet, is sitting at four-hundred pages, with the next book in the series fully written too!
What is your writing process?
Hmm. That's a tough one. The way I usually play it is like this; think of an exciting beginning to the book/series. Really try to think of something gripping, and maybe even dark. Establish a big problem that your main character will have to solve. Get yourself excited about your book. Then, decide who your characters are going to be. Develop them a little. And then, design the ending. After that? Fill in everything between.
Maybe that sounds a little...disorganized. But it works for me! I also like to invert the saying "quality, not quantity". If you initially write for quantity, you'll find that all your crazy ideas, subplots, and characters will be able to grow and expand. Some of the ideas and subplots may not be useful to the story; that's where the "quality" part comes in. But I never make outlines; I never limit myself like that. Explore, experiment, and create. Then you can erase and rewrite.
That's usually how my process works.
Read more of this interview.

Where to find Dominic Sceski online

You have subscribed to alerts for Dominic Sceski.

You have been added to Dominic Sceski's favorite list.

You can also sign-up to receive email notifications whenever Dominic Sceski releases a new book.