Armed with a sense of humor and a love of reading and music, Christopher Hivner has created a very fulfilling life for himself in the wilds of south-central Pennsylvania When not working in the ever exciting world of pre-press composition, he may be reading about a tenth century Viking conquest, listening to Muddy Waters lament the loss of his woman or polishing one of his replica medieval swords. He may annoy you by spouting lines of dialog from Mystery Science Theater 3000 or Monty Python, but can be bought off with a Coke and a slice with extra cheese. He has been fortunate enough to amass over 350 publishing credits, both short stories and poems. While “The Spaces Between Your Screams” is a collection of horror stories, he also writes humor and some mainstream work and had a chapbook of poems, “Edged in Blue”, published in 2004 by Foothills Publishing. 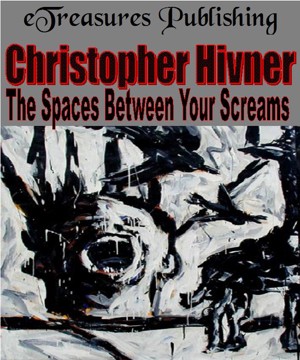 The Spaces Between Your Screams by Christopher Hivner
Price: $4.99 USD. Words: 84,150. Language: English. Published: December 18, 2010 by eTreasures Publishing. Categories: Fiction » Anthologies » Horror
Don't scream. It only entices them, and when you stop, the real terror begins. In the moments between your cries, the monsters are released, profane and insatiable. Werewolves, witches, vampires and creatures never named prowl from the darkness. Soul collectors knock on your door while animals you won't find at the zoo slither through the yard around the dead bodies. Angels hover over your house,

You have subscribed to alerts for Christopher Hivner.

You have been added to Christopher Hivner's favorite list.

You can also sign-up to receive email notifications whenever Christopher Hivner releases a new book.