As a young child, this Richmond native demonstrated her passion for writing through journaling and short story writing. As time progressed her love grew and expanded to develop her own personal poems, soap operas, and television scripts.
By her senior year in high school, she was ready to serve as a school newspaper journalist. It was at this time she realized her raw talent in writing/journalism, although she decided to pursue other career areas first.
In college, she majored in Psychology, (Bachelor's of Science) and Rehabilitation Counseling, (Master's of Science), and went on to counsel youth in her community.
It was not until after a failed relationship in 2001 that Kharisma was inspired to write her first fictional romance novel. She started writing little by little until it was finally completed in 2006. Thus A Taste of BitterSweet Fruit was born!
Kharisma’s first novel A Taste of BitterSweet Fruit (2006). has been well received by the locals in her hometown and abroad. It centers around two romances that are tested by outside forces and ultimately reveal the strength of the relationships. Released in January 2008, The sequel Venomous continues the story with the main character struggling to deal with her own personal trials and coming into her own. In 2009 and 2010, Kharisma released her third and fourth book, Love Thy Self and Love Thy Self – Teen Version, which both were designed to inspire and motivate young women and girls of color. Most recently released in 2011, Kharisma’s fifth book, The Dating Pool Blogbook, is a collection of online blog postings based on relationships and dating issues.

Where to find Kharisma online 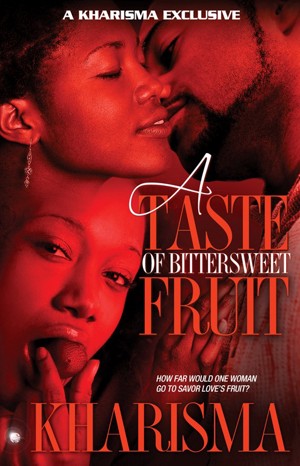 A Taste of BitterSweet Fruit by Kharisma
Price: $2.99 USD. Words: 73,610. Language: English. Published: July 29, 2011. Categories: Fiction » Plays & Screenplays » American
Khaila and D.C. had what most people would call the perfect storybook romance, and passionate sex that would make any couple envious. They were completely like night and day, but complemented each other in every way. After more than two years together they even started having thoughts of marriage. There was only one thing that stood in their way of happiness. Sick obsession!

You have subscribed to alerts for Kharisma.

You can also sign-up to receive email notifications whenever Kharisma releases a new book.