Ever since she was young, Kiki Howell has loved to listen to a well-woven tale with real characters, inspired plots, and delightful resolutions. Kiki could spend hours lost in a book, and soon she knew that creating lives, loves, and losses with just words had to be the greatest thing that she could do. To that end, she pursued her study of literature and writing, earning a bachelor’s degree in English. She then followed in a Master’s program in Creative Writing.

“After a long break having my boys, I finally just had to write again. And, as soon as I gave the stories the space, they entered it. It’s both awesome and humbling to find the words in my mind become characters on a page and create their lives.”

She has now had over forty stories published between eleven different publishers. She could not be more thrilled or grateful to see her creations polished and out in the real world. Although, a bit of caution, most of her stories tend to hang out on the graphically sexy side of town.

In May, 2011, Kiki was chosen as an Ohioana Book Festival author for her novel, Torn Asunder. She's also had three flash fiction stories win writing contests. In the fall of 2013, her novel, Hidden Salem, made the Amazon Top 100 Bestsellers Lists in 3 categories: Paranormal, Suspense and Ghosts.

Where to find Kiki Howell online 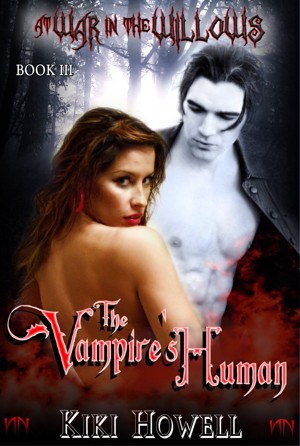 The Vampire's Human by Kiki Howell
Price: $3.99 USD. Words: 35,120. Language: English. Published: January 5, 2013. Categories: Fiction » Romance » Paranormal, Fiction » Romance » Fantasy
Book Three In The At War In The Willows Trilogy. Would you go to any length to save the one you love? Even if what must be done could actually cause their death? What chances could you take to keep them with you forever?