Over two thousand years ago the Romans came, saw and conquered Britain.
They stayed for a few hundred years, give or take, until rising Villa
prices, the ferociousness of the local lions and the quality of home brewed
wine convinced them to take all roads back to Rome.
No Romans remained. Britain, both sides of Hadrian's Wall, became a
Roman-free zone.
Except....
There was one little town where the Roman bugle-song anthem of retreat,
'Legitus Quickitus', was not heard. One town where the Romans and the
locals, ears full of soap, were so busy splashing around together they
missed the thunder of the departing last night chariots of fire. And as
there were no cabs due for another 15 hundred years - and that's if you
believe the cab office - the town's Romans decided to stay.
The town grew, thriving on the naturally occurring spa waters, nurtured by
the river Fons and hardened by the combination of original Brits and Roman
bath lovers. The last bastion of the Roman Empire, it is now a mighty town
indeed.
The town's name? Spawater, home of the legendary Spawater Baths.

The Spawater Chronicles are the tales of its citizens, and how they take on
the world and win.

I am not a Roman, though I have met a few, and was not born in Spawater.
I discovered the ancient town by accident after falling asleep on a train from Paddington.
Noting how people were paid in cash for painting themselves silver and standing stock-still in the town centre, I decided
that such a career in Spawater amongst the Romans was far more interesting than my previous life as an information technology instructor.
Accordingly I joined the Spawater Gladiators' supporters club, bought a
toga and told the boss what he could do with his IT job.
And I've been a loyal Spawaterian ever since. Why not join me!

Where to find Barry Tighe online 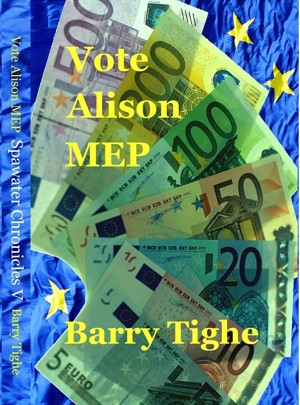 Alison is campaigning to become a Member of the European Parliament. Jady is Alison's campaign manager, plotting her election by Euro hook and Euro crook. Success will get him on the gravy train, with lifelong diplomatic immunity for any crimes he may commit. How will he get Alison and himself aboard? By demanding a Europe-wide yes-no referendum on the EU’s very survival. The EU is rattled...

You have subscribed to alerts for Barry Tighe.

You have been added to Barry Tighe's favorite list.

You can also sign-up to receive email notifications whenever Barry Tighe releases a new book.