The fourth of six sons, Bernard Charles Ourth was born in south St. Louis in 1967 and moved to Wyoming in 1993.
In grade school, he and his best friend dreamed of being novelists and took turns writing about original superheroes in a shared journal. (His friend now lives in Russia, and each continues to pursue his dream to be a published novelist. The 40-year-old journal remains in a safe place.)
He greatly respects the writing and thinking of Thomas Paine, John Steinbeck and Sam Harris.
He earned a bachelor’s degree in journalism from Saint Louis University (cum laude, 1990). He held jobs in writing, photography and copyediting before starting his work with at-risk children in 2006.
He has refereed and coached soccer and hockey, winning two state titles in the latter. He plays piano, electric bass guitar and acoustic guitar and has written and recorded more than 100 songs on a home studio.
In the summer, he spends as much time as possible vacationing in the Missouri Ozarks, walking trails, taking float trips and climbing hills. He, his wife and three daughters also enjoy the tastes of city life in museums, zoo and other cultural enticements.

Where to find Bernard Ourth online 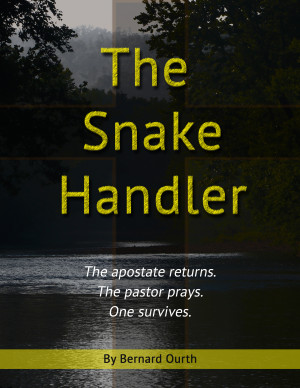 Outcast Harrison Kitchen returns to care for his hospitalized sister and encounters the man who ostracized him: the community’s patriarchal pastor. Kitchen’s sister succumbs to her injuries. Her will demands he remain at the family home or risk forfeiting the generations-old property to the pastor. A perilous collision between the anti-heroic apostate and the revered holy man is inevitable.

You have subscribed to alerts for Bernard Ourth.

You have been added to Bernard Ourth's favorite list.

You can also sign-up to receive email notifications whenever Bernard Ourth releases a new book.