Arriving in 1948 makes me a post war baby boomer close to the onset of the boom. I couldn't stand school but understood its necessity. Surprisingly I found writing difficult in primary and high school. Figuring out what to write stymied me. Looking back I could say I suffered from a long term bout of writer's block.

While in high school enthused about the camera club's project to make a movie I saw that the group needed a script. Without one nothing would come of the enthusiastic plans. I wrote it. We made the movie. We showed it in the school auditorium for a small admission fee and made a profit.

When I went to Ryerson I took creative writing classes. I got involved way to heavily with the extra curricular theatre activities. Every year a theatre group produced a show called RIOT (an acronym for Ryerson Institute of Technology). In my second year I joined the team of writers for that show. I did that for the remaining two years of my course and the year after that.

The RIOT show goes far back in Ryerson's history and as far as I know they are still doing them. It is a comedic, musical, satirical revue. As part of the writing team I wrote on my own, with small groups and with the entire team. Material included one liners, blackouts, monologues, comedic sketches and songs. I found it quite thrilling that people laughed at jokes I wrote.

Much later on when I worked in a hobby shop I joined a model railroad club. After a year or so as a member they elected me to the executive of that club and I served as secretary. As secretary I wrote a monthly report on club meetings and another on monthly display of models that members brought to meetings.

Some time later I built a radio control boat and was invited to join a model boat club, The Capital Marine Modellers' Guild. I volunteered to produce a newsletter for the club. I did that for about ten years. During the time I produced that newsletter I wrote most, not all, of the material for it. I wrote about everything I knew about model building.

At about that time I decided to write a novel. With an old Underwood portable typewriter - it weighs thirty-five pounds - I wrote 'The Cats of Gavrillac.' I will have to change the title because I can't use 'Gavrillac.'

I then got involved with the Bytown Fire Brigade, a historical society dedicated to preserving Canada's firefighting history. I used to take my father to that group's meetings. They were fun loving people and had great parties so I joined. After a year or two I volunteered to produce a newsletter for them. I produced a monthly newsletter called 'The Bytown Trumpet.' It had a minimum of eight pages each month. Again I ended up writing most of its content.

One day in 1996 while helping with drywall installation at the Bytown Fire Brigade headquarters, Will Brooks, who had recently joined, asked me what I thought the organization should be doing. I told him I wanted to see a monument built in Ottawa that would honour Canada's firefighters who had been killed in the line of duty. He thought that was a great idea and that we should make it happen.

From that meeting we formed the Canadian Fallen Firefighters Memorial Development League, which quickly grew to four members. From complete ignorance and a strong desire to succeed we floundered for some time until a series of circumstances, including the attack on the World Trade Center, we eventually contacted the National Capital Commission (NCC) in Ottawa.

After two preliminary meetings with that organization and some soul searching discussion we took steps to bring into existence the Canadian Fallen Firefighters Foundation/Fondation canadienne des pompiers morts en service. On May 28, 2003 Will Brooks, Georges Potvin and I signed the incorporation documents for that organization.

One of the many tasks I took on for the Canadian Fallen Firefighters Foundation was the production of its annual publication 'Courage.' I did write material for that publication but happily most of the material came from other sources than myself. I did that for three years.

To make a long story short, The Canadian Fallen Firefighters Memorial now stands on Wellington and Lett streets in Ottawa, honouring more than a thousand firefighters who have died in the line of duty.

Somewhere in that time period I obtained a copy of Final Draft, software for writing screenplays. It was expensive so I figured I better use it. I did. I wrote the screenplays, 'The Girl and the Gladiator' and 'The Clone.' I decided to take another stab at writing a novel and wrote 'The Outlaw.'

Then my Facebook friend, Anna Haston, encouraged me to get involved with Nanowrimo, National Novel Writing Month. That activity involves writing a 50,000 word novel in thirty days. Thanks to Anna's encouragement in 2010 I wrote 'The Seven Second Kiss.' I sent copies of the first draft of that to a number of people and received a very positive response from my friend Amanda Greef. That encouraged me to rewrite it and edit it for publication. I hope you like it.

Where did you grow up, and how did this influence your writing?
Did I grow up? I got older. I lived on a small street in Ottawa for the first twelve years of my life. Then I moved to a slightly larger street in Ottawa. I wanted to do something interesting and creative to make my living. To my parents and teachers that was anathema. The events in my unpublished novel, 'Cheap Lipstick,' happen at that time and place. Some of the tone of it reflects how I felt about growing up there.
When did you first start writing?
The first thing I actually wrote was a screenplay for a silent 8mm movie that members of my high school camera club made around 1965. We wanted to make a movie. We raised $35 for film and I realized we had no script. So I figured it was up to me to write it so I did. I submitted it to the group expecting rejection. They accepted it and what I wrote ended up on the screen in its entirety. I have no idea where that film is now and that's probably a good thing.
Read more of this interview. 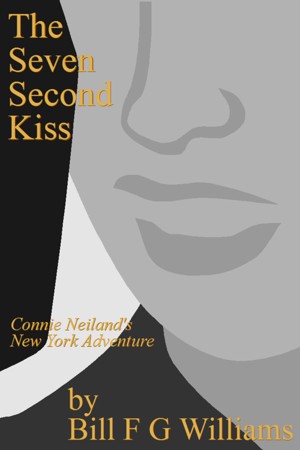 The Seven Second Kiss by Bill F G Williams
Price: $9.99 USD. Words: 53,050. Language: Canadian English. Published: December 12, 2012. Categories: Fiction » Plays & Screenplays » American
With the world emerging from the great depression in 1934 seventeen year old Connie Neiland faced with an unexpected pregnancy runs away from her small town home and goes to New York City where a taste of the big time makes her want more. The depression was ending. War was just around the corner. The music swung.

You have subscribed to alerts for Bill F G Williams.

Would you like to favorite Bill F G Williams?

You have been added to Bill F G Williams's favorite list.