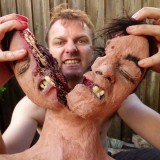 Brian Craddock began writing his own zines in the early Nineties (Tooth & Claw was his first, a vampire and werewolf effort) and contributed extensively to zines and small press along the eastern Coast of Australia.

He then became a puppeteer for a decade, by the close of which he’d written the eclectic and unpublishable novella The Lunatic, a tome that Brian insisted on printing himself and leaving at friend’s homes or on buses.

By the time the new Century had arrived, Brian had already penned (and illustrated) eleven Goth comix (which are self-published comic books, normally on photocopiers and distributed through a network of underground book mailing companies and record stores). The novella The Lunatic and all eleven comix were published under the pseudonym of Dakanavar. The comix are available for viewing in the National Library of Australia, or on DeviantART (search for Crimson: Riot Goth and Alida: the Reluctant Goth). He also closed off and saw in the Centuries with several video reviews of the Goth scene in Brisbane.

In the decade that followed Brian pursued a developing special effects enterprise, but by 2015 back into writing with the publication of his short story “The Angel of Isisford” in the Clive Barker tribute anthology Midian Unmade (Tor Books). For the story, he drew on his experiences in the mid-90’s as a puppeteer and a visit to the memorable and unsettling township of Isisford in Australia.

2014 also saw a return to puppetry, and to writing, with Brian writing the puppet short film Grave Concerns, and co-writing and directing the webseries The Hobble & Snitch Show. He is currently making preparations to write season 2 of the series.

Where to find Brian Craddock online

You have subscribed to alerts for Brian Craddock.

You have been added to Brian Craddock's favorite list.

You can also sign-up to receive email notifications whenever Brian Craddock releases a new book.