What's the story behind your latest book?
A friend who I grew up with became interested in stone circles after he bought a property with a large stone circle on it. He conducted hundreds of tours on his property and has even been approached to do the tour on a commercial basis. His tours have changed many peoples' minds about pre-historical sites because he has shown them how these large boulders have a purpose rather than just being dumped in various places in a more or less random fashion, during the last ice age. On the contrary, there are many circles in the province which still contain power and they are connected to each other by various trails. It is obvious that people at one time were very much connected to one another in ways which the modern mind cannot fathom.
What motivated you to become an indie author?
My first book was "Shadow People: A Journal of the Paranormal." I wrote the book to help anyone who might find themselves in a situation that i was in, although it would be highly unlikely. My situation was at the extreme end and there are now several books which have documented a variety of situations since Feb. 2002. Still the book "Shadow People" is a book about protection and it can help someone who was facing paranormal issues in a variety of ways. At least they should understand some of the issues involved with negative energy after reviewing the problems which I faced. Writing also helps with the process of reflecting on what you're learned and what is important. My next book after Shadow Stone is connected with all of the books I've written so far and in many ways it is a culminating effort.
.
Read more of this interview. 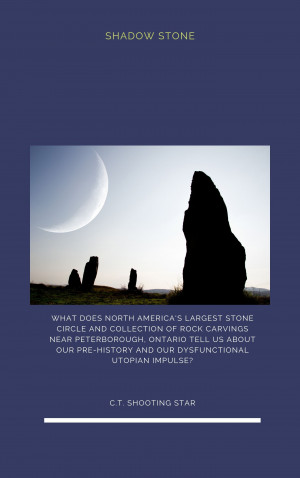 Shadow Stone by C.T. Shooting Star
Price: $4.41 $2.20 USD. (50% off until March 13!) Words: 32,950. Language: English. Published: July 28, 2019. Categories: Nonfiction » Science & Nature » Archaeology, Nonfiction » New Age » Spiritualism
The Circle and The Path are there for all to behold but for now only a few of us with better than average research abilities and a sound but open mind can truly enjoy and admire with awe the wonderful necklaces of stones assembled in our midst showing the old pathways to sacred sites that still exist. You will never look at a simple stone pile or an archaeologist the same way again in your life.

You have subscribed to alerts for C.T. Shooting Star.

You have been added to C.T. Shooting Star's favorite list.

You can also sign-up to receive email notifications whenever C.T. Shooting Star releases a new book.