C.L. Spillard is a complex interplay of matter and energy in a pattern of waves whose probability cloud is densest in York, United Kingdom.

Following the profound influence, in a mysterious process not yet fully understood by science, of the American moon landings on the young pattern’s quantum-based self-awareness mechanisms, C.L. Spillard developed an interest in Space, and the plight of humanity on our small, blue spheroid. This led both to a lifelong career in Physics and a penchant for environmental activism.
C.L. Spillard’s wave-pattern enjoys proximity to a second pattern originating in St Petersburg (Russia), and these two have since generated two younger ones who are now diffusing over the planet stuffing themselves with knowledge as if it were going out of fashion.

Describe your desk
This is not a desk: this is a launch pad. It's a bit of a mess and probably won't manage to get a fly-by past Pluto anytime soon, mind.

To the right of the computer on which I am writing this, there sit a globe, a model tripod made of rubber and a jar full of pens: to the left are my diary, notebook, several volumes of weather records and a pair of cans that don't work very well.

A calendar displays spectacular shots of lightening storms, and next to that hangs a Union Jack that I rescued from a ditch in 2012. I wish I could do the same for the country for which it stands...
Where did you grow up, and how did this influence your writing?
It could be argued that I never did grow up. But the many places in which this never-growing up took place include Southampton, the West Country, Leeds, Lancashire and Brighton.

Oh, and of course Seattle...
Read more of this interview.

Where to find C.L. Spillard online 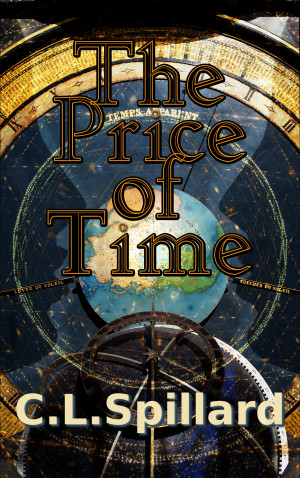 The Price of Time by C.L. Spillard
Price: $2.99 USD. Words: 64,860. Language: British English. Published: October 21, 2017. Categories: Fiction » Visionary & metaphysical, Fiction » Fantasy » Paranormal
Some people have a Guardian Angel. Others aren’t so lucky and have a Guardian Devil. One autumn night Verity Player comes face-to-face with evil genius Stan ‘Satanic’ Mills, mastermind of the mechanism lurking behind humanity’s apparent death wish. She’s the only one who can stop his plan before its final phase. Her struggle pitches her into a surreal game. The stakes: her precious conscience...

You have subscribed to alerts for C.L. Spillard.

You have been added to C.L. Spillard's favorite list.

You can also sign-up to receive email notifications whenever C.L. Spillard releases a new book.