James Bathurst is the story-teller behind Cat On A Leash.  Known as Captain Jim to his audience on the internet, Jim’s style is off-beat and folksy.  Writing isn’t his “day job;”  Jim was a photographer for 32 years.  During that time, he wrote articles for many photography magazines, taking often dry trade topics and making them humorous.

Jim retired from a career in photography at age 52 to take his wife, Joan (also known as “the Blonde”) and Molly, the boat cat, traveling.  It was about that time that he started a cruising thread on a boating forum; “The Cruising Adventures of Wild Blue and Crew” soon became the most visited site on that forum with over 200,000 views.

“It was a natural transition,” Jim says, “I have been writing a travel newsletter since the mid-90s.  I enjoy telling a good story, and the story of the amazing Molly is pretty captivating.”

Jim’s career also included presenting seminars to professional organizations.  The topics ranged from business-building and promoting to photographic techniques and customer service.  “I was a musician in my mis-spent youth; I'm OK with being in front of a crowd.  It’s instant feedback - you know right now if what you’re saying is relevant.”

Master of Photography, Photographic Craftsman, and an internationally affiliated photographic juror (for photography competitions), Jim also received the National Award from the Professional Photographers of America for service to the industry.  “Creating a dynamic image is about story-telling.  You decide where you want the viewers’ eyes to go; you see it in your head before you capture it in the camera.  Writing is similar for me; it isn’t about reporting the facts, it’s about unfolding the story,” Jim relates.

The “captain” part mentioned above isn’t just a nickname - Jim holds a Master Captain US Coast Guard license, a commercial pilot’s license, and a spirit of adventure.

Where to find James Bathurst online 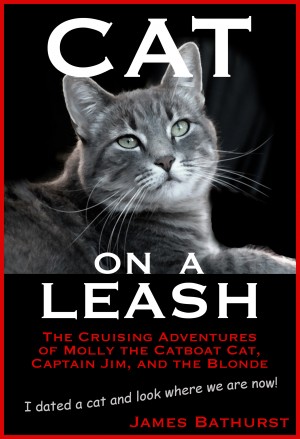 There is a fine line between admiration and stalking. The story of a persistent cat, the couple she “dated”, and their travels aboard the motor-vessel Wild Blue. The 50-something couple retired early, sold their home & photography business, scooped up the cat, and hit the waterways. Life isn’t always easy onboard a 25 foot boat, but it is an interesting escape. Featuring Molly the cat.

You have subscribed to alerts for James Bathurst.

You have been added to James Bathurst's favorite list.

You can also sign-up to receive email notifications whenever James Bathurst releases a new book.