About the Author
Carey Blyton (1932–2002) was both a writer and a composer. He achieved success in many aspects of both disciplines, from the composing of incidental music (early Dr Who episodes and many TV and documentary films) to the composing of opera, as well as songs, chamber and orchestral music; and then, as a writer, from success as the creator of Bananas in Pyjamas to the author of the fascinating travel diary In Search of Serendipity. The breadth and variety of his interests reflected in his work was phenomenal.
The Doggy Tales of Arnold are ten stories for children which appeared late in Carey’s career. Although a successful ‘story-book’ film, narrated by the late Willie Rushton, was made of Arnold and the Acorns, this is the first time any of them have been published.

About the Illustrator
Maurice Stevens studied at the Hornsey School of Art. He began his career in advertising and worked abroad in the USA as an art director with ad agency Leo Burnett, designing and illustrating storyboards for television commercials. He later moved into film directing, shooting TV commercials and won awards in a variety of international film festivals. Maurice has lectured at the Art Institute of Chicago, art schools in London and at the Brighton Film School.
A versatile artist, Maurice’s paintings have been exhibited at a variety of British art galleries, including drawings at the Imperial War Museum. Illustration has always been a valuable, integral part of his work throughout a versatile career translating all forms of written text into a visual life. Maurice’s love of children’s books is evident by his unique-stylised and witty illustrations.

Where to find Carey Blyton online 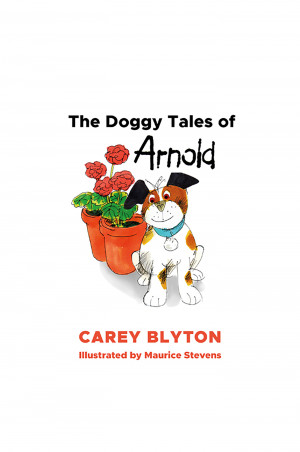 The Doggy Tales of Arnold by Carey Blyton
Price: $4.99 USD. Words: 2,350. Language: English. Published: December 20, 2018 by Austin Macauley. Categories: Fiction » Graphic novels & comics » General
[Note: This text is not on the back cover of the book - but on the first interior page of the book. There are no words on the back cover.] From Carey Blyton – acclaimed composer, travel writer and the creator of Bananas in Pyjamas – come two stories about Arnold, the little dog with the enormous bark!

You have subscribed to alerts for Carey Blyton.

You have been added to Carey Blyton's favorite list.

You can also sign-up to receive email notifications whenever Carey Blyton releases a new book.