John W. Miller was born in Memphis Tennessee. He grew up in that part of Memphis, Hollywood and Chelsea, know as “North Memphis Hell’s Kitchen.” Following service in the U.S. Marine Corps (S/Sergeant) and later a Lt/Colonel in the National Guard, he graduated from the University Of Tennessee School Of Dentistry. In addition to the practice of General Dentistry he became a Professional Custom Golf Club maker. In 1998 the GCA awarded him as Custom Club-maker, of the Year in the Southern Region. In 1999 the PCS awarded him as Atlantic Regional Custom Club-maker of the Year. He makes his home in Nashville, Tennessee with his wife, Joan Seigenthaler-Miller.
At present, he enjoys writing fiction novels and short stories with the dialogue written in a soft mountain dialect. His first novel, The Curse of Satan’s Collar, now published by Xlibris, won the prestigious award, the CLARK COX AWARD for historical fiction at the 67th Annual North Carolina Society of Historians. October 13 2008. The novel spans from 1775 to 1920 and is about his g g g great ancestor Captain Messer, hung by the British, his Dad growing up in the Smoky Mountain, their customs, and the making of moonshine. It also includes stolen British payroll gold coins called half-ass George III, a one of a kind trace coins.

Where to find John Miller online 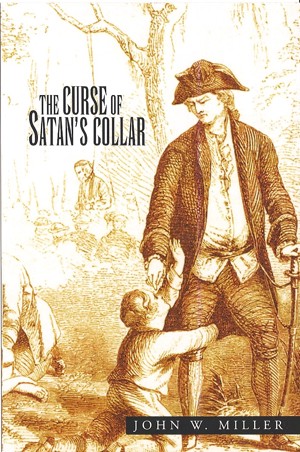 In 1771 under an old giant Chestnut tree in Orange County North Carolina, a Captain Messer stood on the top of an empty whiskey barrel with the end of a hangman’s noose around his neck. He had clammed up about a missing British payroll gold shipment of British gold crowns refered to as "Half-ass George the Third". They were embossed only on one side and therefore referred too as, trace coins.

You have subscribed to alerts for John Miller.

You have been added to John Miller's favorite list.

You can also sign-up to receive email notifications whenever John Miller releases a new book.