I began writing this series during the period I was dating, began as a journal more than anything else. When looking back on it I realised that I could write the book. The first of the series was published in a magazine version and the response to it was overwhelming. I adapted the magazine version to a book series but then decided it would appeal to many more as a serialised and boxed set, rather than to have one very long book, have shorter entertaining episodes.
If I had to do it all again today, the dating...would I? After having lived through 24 dates, I fully understand peoples hesitancy at getting back on the horse and meeting other people through the networks. I do not think I would have the courage to repeat it all, while you are in the moment, you just go for it, looking back, well I suppose that is why we can look back on many things in our lives. We outlived them. I hope everyone who reads the series finds something in it for themselves, something they can relate to as I absolutely believe they will.

Where to find Cassidy Simpson online 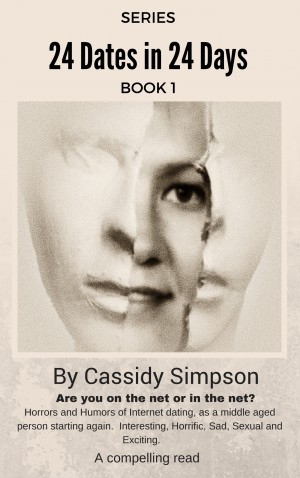 You have subscribed to alerts for Cassidy Simpson.

You have been added to Cassidy Simpson's favorite list.

You can also sign-up to receive email notifications whenever Cassidy Simpson releases a new book.