Christopher Mangum was born in Oakland, CA in the mid- 1970's to a taxi driver and a deeply literary housewife, and grew up in a home visited regularly by Hell's Angels and Hippies and other wandering souls of all types. A relatively quiet and introverted child, Christopher read voraciously (especially classic Science Fiction and Fantasy) and drew constantly. This was a great blessing, as the garden of his imagination was nurtured by brilliant writers from Tolkein to Anne McCaffrey, Peter S. Beagle to Asimov, Bradbury and Heinlein.
Nowadays, he works as a professional artist and oil painter. He holds a BFA in Illustration from Academy of Art University in San Francisco and his artwork has been exhibited and collected across the United States and by a few collectors in Europe.
The Hedge-Wizard's Commission is his first novel.
He lives in Concord, California with a greedy, self-absorbed chihuahua and a temperamental cat.

Where to find Christopher Mangum online

the Death-God of Akrahmur by Christopher Mangum
For centuries, the lands of men have slumbered under the calmness of peace. But a dread army arises in the far East, in mysterious Akrahmur of the mists. An ancient evil abides there, and it plots and plans in dark secrecy. First the hordes of barbarians cross the mountains, and with them come twisted monsters, horrid creations of the most vile magic. Finnan of the Woldenwood is rather a skinny lad, not at all the type to fight and win wars, nor even fistfights. He finds himself apprenticed to the Hedge-Wizard of the Wood, a gruff but kind old man named Wulfmarr. Finnan must struggle to learn his spells, he must fight to win his allies, and he must marshal every resource inside of himself. For he alone will venture into the dark heart of the Eastern shadows, and what he discovers there will threaten everything he loves. 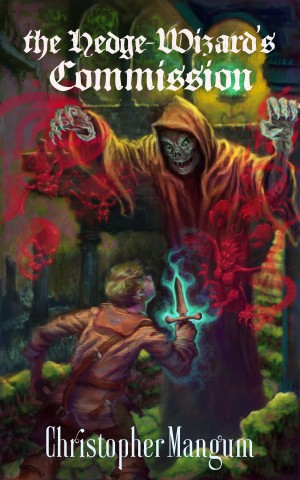 the Hedge-Wizard's Commission by Christopher Mangum
Series: the Death-God of Akrahmur. Price: $2.99 USD. Words: 99,590. Language: English. Published: May 9, 2016. Categories: Fiction » Fantasy » Epic
Finnan the boy is only an apprentice wizard, and not a good one at that. But when the dark armies boil out of the ancient lands of Akrahmur in the mystery-shrouded East, he'll find himself pulled into the very heart of a great war fought by mighty warriors, wizards, necromancers and monsters birthed of dread magics. And the very fate of his world will be decided by the strength of his heart.

You have subscribed to alerts for Christopher Mangum.

You have been added to Christopher Mangum's favorite list.

You can also sign-up to receive email notifications whenever Christopher Mangum releases a new book.