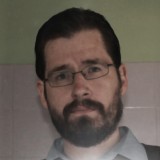 John Coutelier is the author of the sci-fi adventure mystery ‘Jen Air: The Little Queen’, now an ongoing series that follows the adventures of Jennifer Airhart, her childhood friend and teenage bully Kaya Cade, the fearsome changeling Tenley Tych, and many other friends.

All his life he’s been drawn to mysteries, whether they be the mysteries of science, the paranormal, history or dressage – never been able to figure that one out. He has a very broad range of interests such as art and astronomy, video games and origami. Naturally he has a very strong interest in all things fantasy and science fiction related, whether they be books, films, games, or comic books. He is an avid collector of toys, merchandise and all sorts of tat.

Growing up with shows like Star Trek, Doctor Who and Blakes 7, the other major influences on his work are HG Wells, Terry Pratchett, Neil Gaiman and Douglas Adams. In fact there are many, many more, such as Clarke, Asimov, Crichton and Carl Sagan… the list is far too long really.

As a young boy, he read a magazine called The Unexplained, and then started a club at school to hunt for ghosts, aliens and bigfoot.

He never found them, but he still has the magazine and the camera and binoculars.

What's the story behind your latest book?
Among the things I enjoy and love are science, science fiction, fantasy, mystery and mythology and folklore. The Little Queen contains all of those things so is essentially a love letter to them, at least in terms of background and plot. But what draws me into a story are the characters, and in Jen Air the characters I suppose represent different sides of myself. Jennifer is my skeptical and higher reasoning self, although also shy. Kaya is brash and bold which I really wish I was sometimes. Tenley of course is an inner child who acts very quickly on her feelings and emotions, not always thinking much of the consequences. So the story is really just the bringing together of all these different elements that I have been interested in and thought about my entire life.
What motivated you to become an indie author?
I'd always wanted to write. I'd dabbled a lot, but it's only recently I finally forced myself to sit down and write something from start to finish. When it came time to publish I wanted to make sure that I was responsible and in control of my own original ideas and characters.
Read more of this interview.

Where to find John Coutelier online

You have subscribed to Smashwords Alerts new release notifications for John Coutelier.

You have been added to John Coutelier's favorite list.

You can also sign-up to receive email notifications whenever John Coutelier releases a new book.