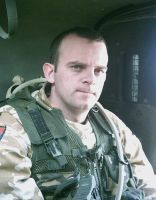 Craig Douglas was born in Ely on a rainy, May morning in 1972, after a traumatic bus ride to the hospital. Since his conception he’s been what has been termed as a Pad’s Brat and travelled to Germany a couple of times to savour the taste of German Bier. He began writing at 14 when he wrote 2 page periodicals on the intrepid adventures of Conan the Stamp Collector. Somewhat disillusioned with village life he joined the British Army in 1990 and began a tumultuous, rather haphazard journey through Army life. Accruing memories and experiences along the way have helped him form the basis of many a short story. He has served in Northern Ireland, Bosnia-Herzegovina, Kosovo, Iraq, Cyprus and Afghanistan.

He currently lives in Rugby with his wife and two children.

Where to find Craig Douglas online

You have subscribed to Smashwords Alerts new release notifications for Craig Douglas.

You have been added to Craig Douglas's favorite list.

You can also sign-up to receive email notifications whenever Craig Douglas releases a new book.