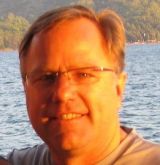 The author is a retired military officer. The settings for his novels are based on the places where he lived and worked. He has two novels and has another soon to be released.

He and his wife, Cindy live in Portland, Oregon. They have three grown sons who are creating and living out their own adventures.

You have subscribed to alerts for Gregory S. Lamb.

You have been added to Gregory S. Lamb's favorite list.

You can also sign-up to receive email notifications whenever Gregory S. Lamb releases a new book.