D. John Watson grew up in Mansfield Connecticut, near the main campus of UCONN. Growing up asthmatic, he spent a lot of time reading and drawing. He fell in love with the possibilities of fantasy and science fiction used those to fuel his art with an eye to becoming a professional illustrator. His love of these genres drew him first to study art at another nearby university and then to turn those illustrations into writing.
While researching a short story, he took a sample martial arts class and was soon on his way to accomplishing something that he never expected to do as a child, becoming a martial instructor. He became an assistant instructor and eventually the rank of 2nd Dan.
D. John was also a contributing columnist for All Authors Magazine and has published two short stories in All Authors Publishing House’s Concordant Vibrancy anthologies.
D. John is married and lives with his wife and son in western Mass where he works as a restaurant manager and is currently working on the next chapter in the Chronicles of Irindia series as well as other projects.

A few words from the author:

When I was growing up I was drawn to what is now called speculative fiction, which I guess is a term that encompasses both science fiction and fantasy. I read books by such diverse authors as Tolkien, Lewis and Asimov because I was drawn to worlds where anything was possible. Later, with the arrival of other writers like J. K. Rowling and Christopher Paolini, I was able to enter a world where magic was not only possible but very real. As a kid, and in a time before computer games and internet gaming was even a thought, I spent what might have seemed to be an inordinate amount of time in the worlds that such writers created. I was able to indulge myself through the words that I saw on the page or images on the theater screen. Through such writers, I was able to visit fantastic worlds and meet incredible people. During those years, I tinkered with some short stories and allowed my drawing and painting to reflect my imaginings. That wasn't enough. I wanted to do something that could be shared by more than just a few people I chose to see a painting or a sketch. I wanted to create a world of my own.
This series began with a simple premise, like all fiction; “what if?” That premise came from an image that I've had for a long time. It was the image of a young hero floating off the ground, wreathed in small ethereal lights. I saw threatening creatures and a final wash of light that was the end of the story. But how to get there from the beginning? That is, after all, the writer’s challenge. To get from point A to point B and give the reader a ride worth taking. This is, I hope, that ride.

What is your e-reading device of choice?
I use my phone as a reader so I use the Kindle app. Also my library has an E-reader service called Axis which has a pretty big selection
What book marketing techniques have been most effective for you?
I still testing the waters here since I'm doing a total re-release of my first book which I've given a major overhaul. I do plan on using blog tours and social media though​
Read more of this interview. 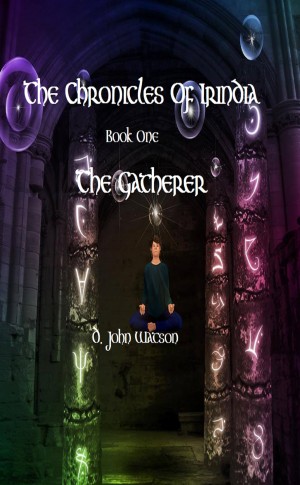 The Chronicles Of Irindia Book One: The Gatherer (YA Fantasy) by D. John Watson
Price: $4.99 USD. Words: 178,260. Language: English. Published: October 12, 2012. Categories: Fiction » Young adult or teen » Sci-Fi & fantasy
In a world where magic is real and monsters roam, one 13 year old boy has been thrust into a land he does not know to defeat a wizard more powerful than any other. Can he find the pieces of the Stone of Irindia and save their world, as well as his own?

You have subscribed to alerts for D. John Watson.

You have been added to D. John Watson's favorite list.

You can also sign-up to receive email notifications whenever D. John Watson releases a new book.