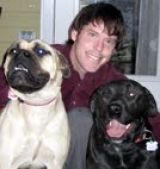 D. Ryan Leask is an avid reader and writer. "Counting Down the Storm" is his freshman effort with many more to come. He grew up in small town Alberta but after studying in the Maritimes and briefly living in Ottawa, now calls the bustling and booming city of Calgary, Alberta Home. He lives there with his wife, Antonia, two beautiful children and his faithful dog Nemo.

I have temporarily un-published Counting Down the Storm as I am in the midst of editing and re-vamping for a re-launch! Stay tuned!

You have subscribed to alerts for D. Ryan Leask.

You have been added to D. Ryan Leask's favorite list.

You can also sign-up to receive email notifications whenever D. Ryan Leask releases a new book.