Danielle Thamasa is a motorcycle riding librarian. After spending years on the back of her dad's bike, she decided it was time to learn to ride her own, which led to her getting her motorcycle endorsement in the summer of 2010. Then, in 2011 she graduated with her Master's Degree in Library and Information Science.

She has also been writing with the hopes of someday being published ever since she was in the seventh grade. She had poems and stories included multiple times through junior high and high school in her county's annual creative writing publication. She further honed her writing skills in college, where she worked on the school newspaper for four years.

In her free time Danielle does a lot of reading and writing, as well as spending a great deal of time with fellow authors she met by participating in NaNoWriMo.

Where did you grow up, and how did this influence your writing?
I grew up in central Ohio, starting in a moderate size city before moving out into the middle of a number of cornfields when I was nine. It was honestly that small-town feel of my later childhood that helped me to see the beautiful simplicity of writing about that same sort of community. But really, it was when I went to college that truly impacted my writing. I met so many people who held different beliefs and came from different places, but we got along quite well. College also allowed me to broaden my horizons and travel, which really opened up my mind to creating fantastical worlds with a great deal more detail and depth to them.
When did you first start writing?
I think this is a difficult question to answer in reality. I mean, from listening to my parents, I almost always told stories and had adventures with my friends, both real and imaginary. In elementary school I wrote a few short stories and such, but it was when I entered junior high that I started writing longer stories (ones that are now long gone and thank goodness, because they were pretty bad). High school brought me the dedication to write even longer stories, though I don't think I had one that made it past 50K. It was the discovery of NaNoWriMo that got me to start writing stories that were long enough to be considered novels of a publishable length. Now I can't imagine a time without writing, and I really can't pass up a session of NaNo.
Read more of this interview.

Where to find Danielle Thamasa online 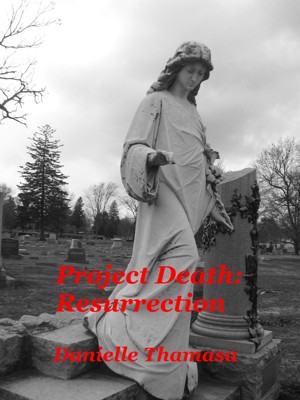 Project Death: Resurrection by Danielle Thamasa
Series: Project Death, Book 1. Price: Free! Words: 89,680. Language: American English. Published: August 18, 2013. Categories: Fiction » Fantasy » Paranormal
Tamesis was always determined to be the absolute best Resurrector there was, but Fate had different plans. An encounter with two mysterious men during her first heal sets her on a path she never expected. Now she needs to accept that something has twisted the beliefs of the Resurrectors and she is needed as the Angel of Death, healing those she can and reaping the souls of those meant to die.

You have subscribed to alerts for Danielle Thamasa.

You have been added to Danielle Thamasa's favorite list.

You can also sign-up to receive email notifications whenever Danielle Thamasa releases a new book.