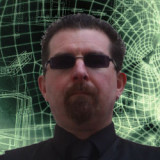 Dave Higgins writes speculative fiction, often with a dark edge. Despite forays into the mundane worlds of law and IT, he was unable to completely escape the liminal zone between mystery and horror.

Born in the least mystically significant part of Wiltshire, England, and raised by a librarian, he started reading shortly after birth and has not stopped since. He currently lives in Bristol with his wife, Nicola, his cats, Jasper and Una, a plush altar to the Dark Lord Cthulhu, and many shelves of books.

It’s rumoured he writes out of a fear that he will otherwise run out of things to read.

What is the greatest joy of writing for you?
I read compulsively. I will strain to read distant notices through heavy rain. I will even read the same cereal packet I read yesterday.

So, one of the greatest joys for me is the thought that somewhere out there someone like me will have one more thing to read.
Do you remember the first story you ever wrote?
I went to a Church of England primary, so was asked to re-write Bible stories in different settings; I can remember rewriting at least one of them as a play set in space, but cannot remember which parable it was. I can remember writing my own stories too, but not what they were about.

I do remember starting a book when I was 11 or 12 (if I acknowledged a distinction between novels and short stories then, I cannot recall which I intended). It opened with the protagonist in a five-sided temple-like room, wondering how he got there, realising it was a dream, then finding evidence it might not be. I produced a first chapter before I ran out of steam. Given the similarity to Lovecraft combined with the theme of ancient knowledge bleeding across time in his work I am not sure now whether to see it as early evidence of interest in speculative fiction or of a cthonic conspiracy revealing itself only to my unconscious.
Read more of this interview.

Where to find Dave Higgins online

Josie Stein Comedies by Simon Cantan
& Dave Higgins
Reuse, Reduce, Recycle shouldn’t include people Normally, freezing to death in deep space is pretty permanent. But Engineer Josie Stein was just defrosted a thousand years in the future, aboard the U.F.S. Greenstar, a recycled spaceship on a mission to stop the self-destructive aliens of the galaxy from wiping themselves out. If that wasn’t enough, she’s immediately elected captain. The last captain’s success rate was one hundred and sixty-seven alien species extinct to zero saved, so she can’t really do any worse. But how can she deal with aliens when she can no longer understand her own species? Inspired by Star Trek and Buck Rogers, Greenstar is a funny, action-packed take on the future, filled with strange aliens and neurotic characters.

Seven Stones by Dave Higgins
An aging priest, an idealistic hunter, and a troubled healer seek to bind ancient evil. Collecting the episodes of the weekly serial.

Dragons & Magic by Simon Cantan
& Dave Higgins
In a world where RPG stats are real, a boy designed by idiots is lucky to survive

Bespoke Imaginings by Dave Higgins
Collections of short speculative fiction, crossing genres but all birthed from the dark cocoon of Dave Higgins' mind.

An Unquiet Calm: A Collection of Short Stories
Price: $0.99 USD. 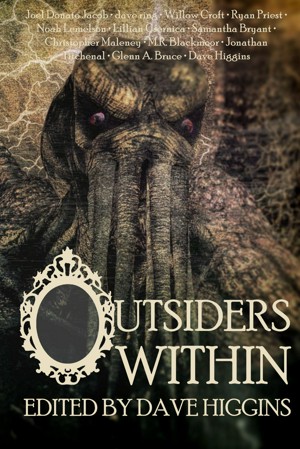 Outsiders Within by Dave Higgins
Price: $3.99 USD. Words: 53,790. Language: English. Published: December 18, 2020. Categories: Fiction » Horror » General, Fiction » Anthologies » Short stories - multi-author
Lovecraft and his successors show a world where human civilisation is only a thin veneer over black seas of ignorance. But what of those who wear their own averageness like a veneer? Neither drawn toward the horror by academic curiosity nor driven their by society, but unmoored by a mundane secret. Twelve tales of overtly normal people coming adrift in an incomprehensible universe. 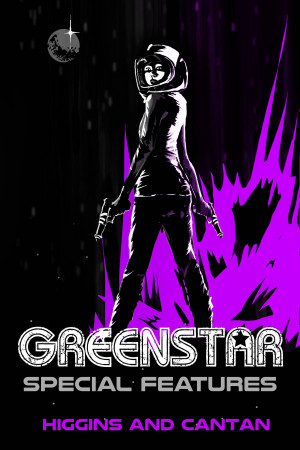 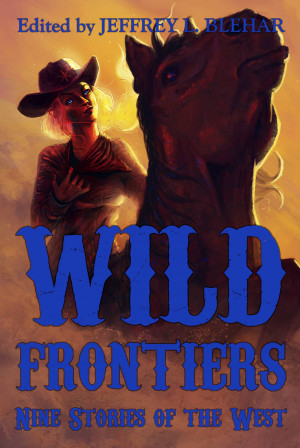 Wild Frontiers: Nine Stories of the West by Dave Higgins
Price: $2.99 USD. Words: 50,420. Language: English. Published: September 11, 2019. Categories: Fiction » Western, Fiction » Horror » Weird fiction
The Frontier: the line between civilisation and the unknown where pioneers rely on a strong will and a dead eye not big city laws. A land where your sweat makes a place yours, whatever a map says; where a badge doesn't make a sheriff better than anyone else; where the divide between legend and reality isn't where it seems. Nine tales showcasing the grit and adventure that built the frontier. 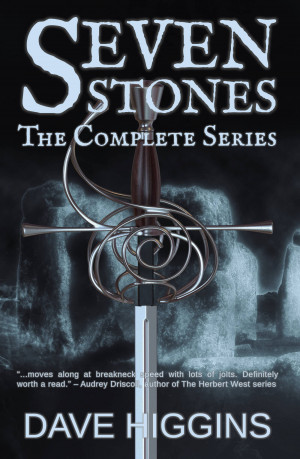 Seven Stones: The Complete Series by Dave Higgins
Series: Seven Stones, All 97 Parts. Price: $5.99 USD. Words: 113,150. Language: British English. Published: March 30, 2018. Categories: Fiction » Fantasy » Dark, Fiction » Horror » Occult
Collects every part of the swords-and-sorcery serial. Plagued by nightmares of shifting stone and ancient evil, Absolution Kobb journeys to the northern edge of civilisation. Most treat him with disdain and ill-trust, but two people see his quest as a way to better their own lives. 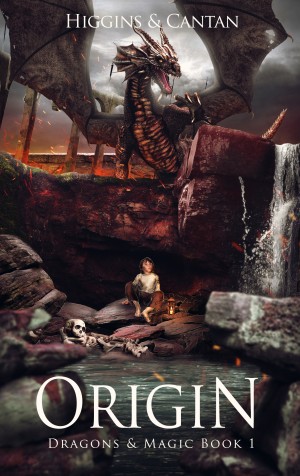 Origin by Dave Higgins & Simon Cantan
Series: Dragons & Magic. Price: Free! Words: 18,170. Language: British English. Published: October 27, 2016. Categories: Fiction » Fantasy » General, Fiction » Humor & comedy » Parody
Some are born to advantage, privilege. Edmond was born to village idiots who put his points into Luck. They knew an opportunity to win the lottery when they saw it. Edmond dreams of being a hero and scholar. Impossible goals when your Intelligence and Wisdom couldn’t be lower. Is Edmond nothing but a walking rabbit’s foot? Will his parents’ dreams of fortune come true? It’s all just a roll away. 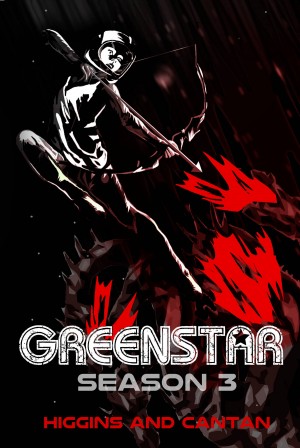 Greenstar Season 3 by Dave Higgins & Simon Cantan
Series: Josie Stein Comedies, Volume 3. Price: $5.99 USD. Words: 99,910. Language: British English. Published: December 1, 2015. Categories: Fiction » Science fiction » Space opera, Fiction » Humor & comedy » Parody
What if you really had to start again from scratch? After saving Earth for the second time, Josie thought she finally had time to deal with personal business. But a trap in the Greenstar's engines meant she really got away from it all. Trapped in a featureless void, she discovers that even being the first woman in a new universe won't protect her from having to solve everyone else's problems. 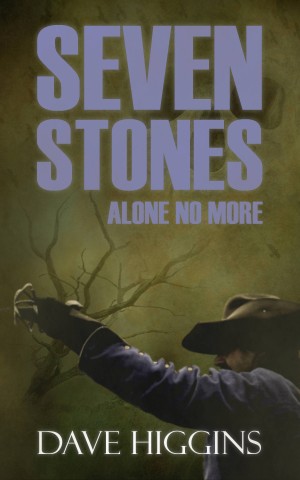 Seven Stones: Alone No More by Dave Higgins
Series: Seven Stones, Parts 1-9. Price: $0.99 USD. Words: 12,990. Language: British English. Published: August 28, 2015. Categories: Fiction » Fantasy » Dark, Fiction » Horror » General
Collects parts 1 - 9 of the serial. Plagued by nightmares of shifting stone and ancient evil, Absolution Kobb, Reverend Militant of the Order of the Maker, journeys to the northern edge of civilisation. Most treat him with disdain and ill-trust. But Anessa Tanton sees a way out of her village. 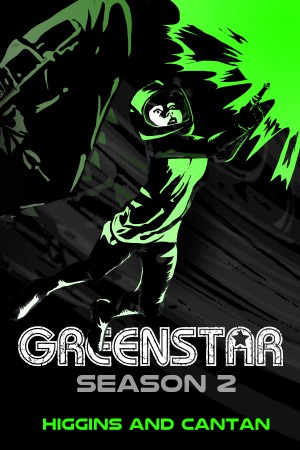 Greenstar Season 2 by Dave Higgins & Simon Cantan
Series: Josie Stein Comedies, Volume 2. Price: $5.99 USD. Words: 98,280. Language: British English. Published: May 1, 2015. Categories: Fiction » Science fiction » Space opera, Fiction » Humor & comedy » Parody
Josie foiled a scheming, homicidal AI. She saved the Earth from the Kalmari. But nothing is good enough for Burger Supreme: they think a ray forcing everyone to have a conscience is a bad thing. Dispatching Vesta Hartman, a captain with two itchy trigger fingers and everything to prove, Burger Supreme want the Greenstar brought to justice at any cost. Even if it means turning it to powder first. 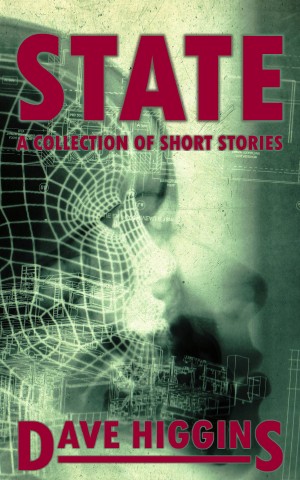 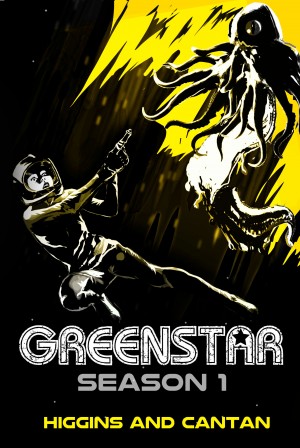 Greenstar Complete Season 1: The Space Opera by Dave Higgins & Simon Cantan
Series: Josie Stein Comedies, Volume 1. Price: $0.99 USD. Words: 101,060. Language: British English. Published: October 1, 2014. Categories: Fiction » Science fiction » Space opera, Fiction » Humor & comedy » Parody
Humanity’s best hope is a wicker spaceship. Josie Stein woke up a thousand years in the future and was immediately elected captain of the U.F.S. Greenstar, a recycled spaceship on a mission to stop the aliens of the galaxy from wiping themselves out. Now homicidal aliens have set their sights on Earth. How can the ramshackle Greenstar possibly stand in their way? 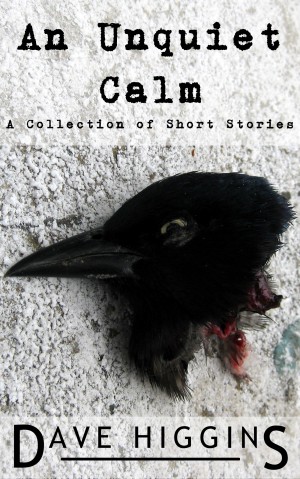 You have subscribed to alerts for Dave Higgins.

You have been added to Dave Higgins's favorite list.

You can also sign-up to receive email notifications whenever Dave Higgins releases a new book.