Born in 1946, I grew up in Arlington, Massachusetts. I attended Bates College in Lewiston, Maine, majoring in English literature. During my junior year, I studied English Literature at Oxford University and travelled in Europe.

After graduating in 1968, I enlisted in the Air Force one step ahead of my draft board's kind invitation to join the army and travel to Vietnam. I married Susan, my high school girlfriend, during leave between tech school and my posting to the Philippines at Clark Air Base.

Discharged from the military in 1972, I was hired by Liberty Mutual Insurance to attend their three-month computer training course. I learned later that the major reason I was hired was my writing and communications background. An English degree can be a valuable asset!

After 35 years in information technology, I retired from Massachusetts Financial Services in the spring of 2012.

My wife and I moved north of Boston in 1974. Our daughter lives in Ireland with her husband. Our son and his wife are pediatricians working in Rhode Island. We have four grandchildren.

You’re a 68-year-old man who grew up around Boston. Whatever possessed you to write a novel from the point of view of an 18-year-old Jewish girl living in Montreal in 1951?
Possessed is the right word. Every morning, I had coffee in a café where I read a book to unwind after commuting to my job in Boston. Riva Weiss, an elderly woman who also stopped at the café before work, introduced herself and asked me what I was reading. Over several years, we discussed authors we liked and swapped favorite books. When I told her I was retiring, she asked about my future plans. I said I wanted to write short stories “and maybe a novel.” Riva began telling me several stories about her childhood in Montreal. When I said they would make great short stories, she encouraged me to ‘write them up.’ I jumped at the chance.
One morning, soon after I finished writing two stories, she beckoned to me as if wanting to tell me a secret. “I know you like dark stories,” she said. “Here’s one I haven’t thought about for sixty years.” For the next half hour, she described the events surrounding her engagement at the age of 18 to a young, wealthy man in Montreal in 1951. I was astounded by her story and couldn’t get it out of my mind. I also couldn’t wait to start writing.
She expected it would be another short story; I envisioned it as a novella. Every week I brought in the latest pages for her to read. After two and a half years, the novel reached over 300 pages.
You’re publishing your first novel in your sixties. That’s unusual. When did you decide to be a writer?
One doesn’t choose to be a writer. There’s something inside you that compels you to write. I began writing at Bates College in Maine. While studying abroad at Oxford University in England during my junior year, I travelled throughout Europe during term breaks. For my B.A. thesis, I wrote stories, essays and poems based on my travel journals. Like many young writers, I was ‘bitten’ by the poetry bug in my twenties. I was cured, mercifully, within two years. Three poems were good enough to escape the shredder.
In my mid-twenties, I began writing short stories. An early story, submitted to the literary magazine at the University of Massachusetts, was not accepted, but the editor wrote a personal note praising the story and encouraging me to continue writing. I have always treasured that ‘rejection.’
Read more of this interview.

Where to find Dave Riese online 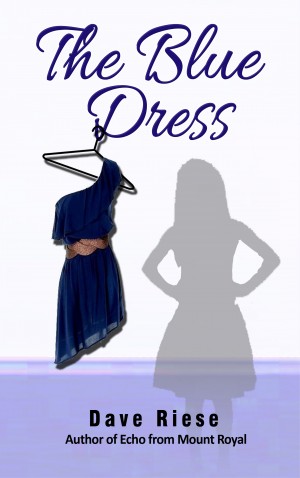 The Blue Dress by Dave Riese
Price: Free! Words: 35,100. Language: English. Published: June 5, 2016. Categories: Fiction » Women's fiction » General, Fiction » Historical » Canada
A series of three short stories introducing Rebecca, a Canadian teenager, living in Montreal in the 1940s. In the title short story, Rebecca receives a second-hand blue dress as a gift. When she is forced to give up her hand-made needlepoint pillow in return, she finds a way to exact a fitting revenge for the adults’ betrayal. The stories are a prequel to the novel Echo from Mount Royal. 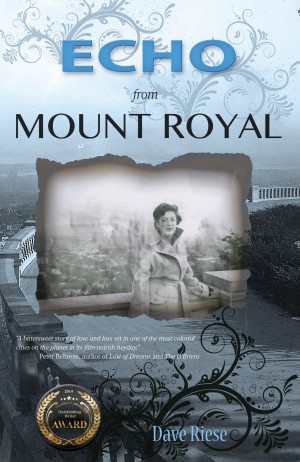 You have subscribed to alerts for Dave Riese.

You have been added to Dave Riese's favorite list.

You can also sign-up to receive email notifications whenever Dave Riese releases a new book.