Deane Young was born in California in 1963. He has been an Ordained Minister with the Church of God, Cleveland, Tennessee, since the year 2000. Deane served as associate Pastor for four years while stationed in El Paso, Texas. He ministered the Word of God and played the guitar while stationed in Kuwait, and lead Bible studies while deployed to Iraq. He holds a Master of Business Administration Degree (MBA), Cum Laud, and a Bachelor of Science Degree (BS). He served 22 years in the United States Army and retired in 2007 as a Sergeant Major, he is a graduate of the United States Sergeant’s Major Academy. He lives with his wife Shelia of 36 years. They have two children, Christopher and Shannon, and eight grandchildren, Andrew, Kaitlyn, Shanna, Riley, Arianna, Brianna, Parker, and Reagan. They are Co-Founders of Bread of Life Ministries in Overgaard, Arizona. Deane currently serves as an Pastor and Teacher. Deane is a self-taught guitar player and plays as part of the Praise and Worship Team for their church.

Where to find Deane Young online 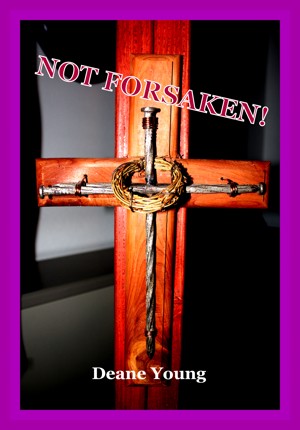 Not Forsaken! by Deane Young
Price: Free! Words: 9,280. Language: English. Published: February 5, 2012. Categories: Nonfiction » Religion & Spirituality » Christian Life / Inspirational
This book is intended to give you, the reader, encouragement, and to prove, through scripture that God has not and will not ever forsake you, no matter what! You are NOT FORSAKEN!

You have subscribed to alerts for Deane Young.

You have been added to Deane Young's favorite list.

You can also sign-up to receive email notifications whenever Deane Young releases a new book.