I live in Coorparoo, an inner suburb about 6km south of the capital city of Queensland, Brisbane.

I have been retired from my resources career for some five years now. My wife of 50 years Kathy and I decided to downgrade to an independent seniors living village called “The Village” at Coorparoo. Best decision we ever made. It is the beginning of a new life for us. We are both participating in Pilates, Yoga, gym work and dancing. I am teaching Tai Chi, active in the Variety group, choir and writing.

I have had a 45-year career as a Geologist exploring and developing resources. My career was an exciting one which allowed me to mix with people from all walks of life. I was very lucky to ride the Australian resources boom and participated in a number of oil and gas discoveries. I rose through the ranks and built up over 36 years of experience in Australia’s premier onshore oil and gas basin, the Cooper-Eromanga Basin. In my later years I was a consultant to the industry and because of my knowledge obtained and promoted acreage through my own private companies.

To call a test and get oil to surface in saleable quantities is a great thrill. Like fine wines a geologist needs a lifetime to mature. With good fortune a geologist can claim participation in economic discoveries. I was the well site geologist on Beach Petroleum’s North Paaratte-1 well, their first commercial well after eighteen years in the game. The field and subsequent adjacent discoveries were developed to supply Warrnambool with enough gas for over twenty years. I called the test which resulted in a new field oil discovery on the Mirage-1 well, Victoria Petroleum’s first economic discovery after twenty-one years of activity. I was involved in a further four oil field discoveries in the Cooper-Eromanga basin whilst leading their exploration program for a number of years.
Today I get my enjoyment through writing, travelling, teaching Tai Chi and my grandchildren.

I am interested in transformation, becoming, evolving into a new entity over time. Transformation can be an exhausting process of course but it sure beats stagnancy. I have experienced impermanence in my life attending four different secondary schools, being employed with nine different companies, self employed as a consulting and contract geologist for many more companies. Kathy and I have lived in six different houses in four different states of Australia. I have conducted field work in all states of Australia bar Tasmania and worked in New Guinea and New Zealand.

Impermanence and change has become a Harrison family trait since that day in 1960 when my father decided to move from Perth to Melbourne.

My fundamental motivation is to participate in creating a better world. My interests are family, health, ageing, psychology, philosophy, religion, travel, music, writing and the arts.

If you wish to know more about me, I recommend you purchase my memoir and enrol in my fortnightly newsletter – The Dennis Dialogue.

What's the story behind your latest book?
This is a legacy document for my family that I believe will be widely appreciated by readers of memoirs and autobiographies. At my book launch on September 1st held in Brisbane, Australia I had 130 attendees and achieved 57 sales. Now that’s not bad market penetration! Experienced author Pat Noad who introduced me remarked at the end of the launch, “I have never been at a launch where the book signing went longer than the party”, and I might add the food and wine did not run out.
The book’s main over-arching themes are mental ill health of my mother and the impact that had on all members of the family, the love of father and son that resulted, the growth of a boy into manhood and the gaining of courage through five key male mentors. Even today in our enlightened times openly talking about mental ill health is not easy but I have been greatly encouraged by the phone calls and sharing since the launch by people that have similarly felt the pain of a loved family member that has suffered from a mental illness.
Others have thanked me for the window it has given them to the life and times of a baby boomer.
What is the greatest joy of writing for you?
The discovery of self, the entry into the creative space where new discoveries and possibilities are made. I am at my best in that creative space.
Read more of this interview.

Where to find Dennis Harrison online 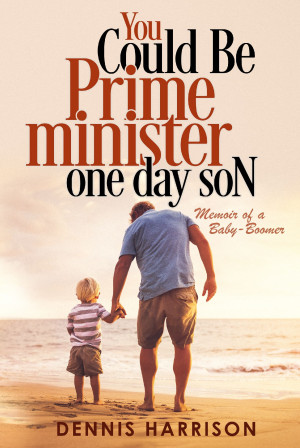 Dennis is brutally honest, open and frank in this memoir. The big themes of family relationships, sense of spirituality and refusal to see himself as a victim are interweaved in the story and all told with great humour. The importance of male mentors to advance a boy into manhood can be observed as the story unfolds. Through their guiding hands and leadership wisdom is gained. Love wins through.

You have subscribed to alerts for Dennis Harrison.

You have been added to Dennis Harrison's favorite list.

You can also sign-up to receive email notifications whenever Dennis Harrison releases a new book.