Derry Hannam has a bachelor's degree in education from Oxford University and an M.Phil, in educational research from Exeter University.

In his twenty years as a teacher in English state secondary schools he always tried to create environments where students could make choices about and take control of their own learning in a democratic and rights respecting context.

He then became a school inspector where he tried to support other teachers and schools with similar ideas. He was part of the successful defence of Summerhill democratic school against the threat of closure by the UK government in 1999. He has been an adviser/trainer/rapporteur for the Council of Europe Education for Democratic Citizenship project and a researcher/adviser to the development of citizenship education in the English national curriculum. At the request of the English ministry of education he authored the ‘Hannam Report’ based on research that demonstrated associations between democratic, participative, student centred methods in schools and higher academic results, less anti-social behaviour, and better school attendance, especially for students from economically and socially deprived backgrounds. He has also conducted research into student participation in combined arts projects for Derbyshire County Council; students as associate governors for ippr and Creative Partnerships; student feedback to government on the National Curriculum for QCA; effective school councils for the NSPCC; a review of international student participation in decision making projects for Cambridge University and the English Department for Education. He has participated in two major UK/US inter-governmental seminars on the future of Citizenship Education.

He has co-authored several books on the theme that ‘...if you want young people to learn about democracy in schools they have to do it and not just listen to teachers talk about it’ including a Handbook for Successful Student Councils. Most recently he has written the book "Another Way is Possible - Becoming a Democratic Teacher in a State School' which records and explores the creation of a democratic learning community of 11-13 year olds in an English secondary modern school from 1969 to 1971. As a visiting fellow in student voice at the University of Sussex he was part of a project to democratise the school system of a deprived English city, Portsmouth, which has now blossomed into a sustainable social enterprise run by young people. For several years he has been a member of the international Student Voice Research Network based at Cambridge University and now at the University of Vermont. He has contributed to many conferences on the theme of Democratic Education and Education for Democracy including the Council of Europe World Forum on Democracy and Education in Strasbourg and events in Poland, Greece and the Ukraine.

Derry has been described as a ‘bridge person’ who tries to bring about dialogue between the mainly private democratic education movement with its 500+ schools worldwide and state or public school systems. This has at times involved supporting democratic schools in legal actions; a role that he has played in England, Germany, Denmark, and the Netherlands. He is currently supporting start-up democratic schools in several countries, advising them how best to work with their respective state systems. 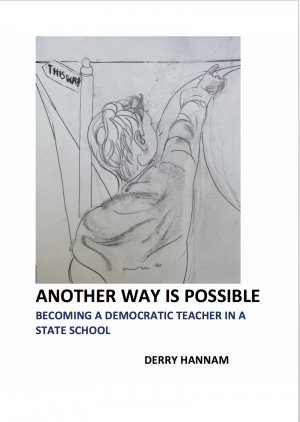 The author argues that a new “Way” of schooling is required. Young people are ‘natural learners’ needing time and space to develop their interests and passions, in schools where teachers and students collaborate respecting democracy and human rights. They do not need exam factories. He describes his personal journey leading to the creation of such a learning community in an English state school.

You have subscribed to alerts for Derry Hannam.

You have been added to Derry Hannam's favorite list.

You can also sign-up to receive email notifications whenever Derry Hannam releases a new book.