E.K. Prescott, Ph.D., has been an educator for almost 30 years, and has taught at the college level for the past 15 years. She spent many years as a high school English teacher, middle school principal, and national educational consultant. Among her many accomplishments, she has been awarded research grants, named director of a research institute, and her work was published by the S-STEP group of the American Educators Research Association. She was also asked to present her research in London, England at a S-Step conference.
Dr. Prescott earned her bachelor’s degree at the University of Missouri and her master’s degree at Cardinal Stritch University in Milwaukee, WI. She earned her doctorate at the University of Wisconsin-Madison, where she was awarded a three-year, full-time Fellowship.
She is currently an online Associate Faculty member, mentor and residency instructor for the University of Phoenix-School of Advanced Studies, as well as a part-time professor for other online doctoral programs.
Her new fictional mystery, The Ivy League Chronicles: 9 Squares, is filled with historical facts and events that were very real in New Haven, CT in the 1920’s. The book explores the truths about the ruling class of the United States and gives the reader a sense that there is a lot more to the world than what is actually seen. She brilliantly weaves together the threads of New World Order, metaphysics, witchcraft, conspiracy, and good and evil into this first installment of the Ivy League Chronicles series.
Dr. Prescott lives in a log cabin nestled in the mountains of northern Arizona with her husband, four horses, and two black labs. She connects with fans via social media on Facebook.com/EKPrescottWritesMystery and on Twitter @ekprescottwrite, as well as sharing insights on writing, her book tour and historical fiction on her blog 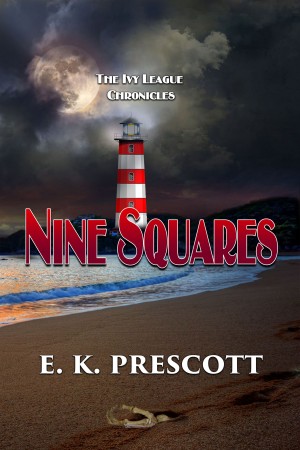 Nine Squares by E K Prescott
Price: $3.99 USD. Words: 85,520. Language: English. Published: October 24, 2016 by World Castle Publishing, LLC. Categories: Fiction » Mystery & detective » Amateur sleuth, Fiction » Mystery & detective » Historical
When Maize and her friend find a skeleton buried in the sand at the beach with a mysterious amulet wrapped around its fingers, she and Richard set out to solve a murder. But Richard soon finds himself following well-planted illusionary clues, and as he continues to investigate, a series of events shake the depths of his philosophical, religious and spiritual beliefs.

You have subscribed to alerts for E K Prescott.

You have been added to E K Prescott's favorite list.

You can also sign-up to receive email notifications whenever E K Prescott releases a new book.