At an early age J. F. Ziegler showed an eagerness to write down her thoughts and feelings. She was on the school newspaper staff in middle school. She took advanced literature and creative writing classes in high school. Often, her writing was read out loud to the class as an example of excellent work.

College writing was more technical as papers involving each subject were required.

In her early twenties J. F. realized that "things" did not bring her the happiness and peace of mind she was seeking.

In 1983 she made her first trip to India and soon was a devoted student of eastern philosophy. This study brought the long sought answers she had been seeking. Since that time she has traveled to India on many occasions. She continues today to work on her self in hopes she can love all and serve all.

THE DUCK AND THE FOX, (ISBN 0-9621235-0-0 & the Library of Congress Number 88-032071).
Duck in his adventures with Fox, is taken on a journey where he travels beyond the physical world into the realm of the spirit world and discovers the magic of himself.

FABLES FROM THE HOLLOW, THE GREAT SING, (ISBN 0-962-1235-1-X & the Library of Congress Number 95-43719)
This is a story based on the teachings of Bhagavan Sri Sathya Sai Baba. It teaches the reader life's important values. Imaginative and enlightening, this story launches the reader on a journey to the real "self"... to a place where dreams are born and peace of mind in king.

While earning a living in the medical profession, J. F. continued to write. She has been published in THE JOYFUL CHILD JOURNAL, a quarterly publication based on the book THE JOYFUL CHILD. It is a sourcebook of activities and ideas for releasing children's natural joy by Peggy Jenkins, Ph.D.

THE EAST AND WEST SERIES, a monthly journal for self-improvement, self-knowledge and self-realization published in Pune, India, has also printed J. F.'s work.

THE SATHYA SAI NEWSLETTER, USA, A bi-monthly magazine published by the Sathya Sai Book Center of America, has often printed her stories and poetry.

Her latest writing, EARNEST SEEKER is a metaphysical tale told in rhyme about the great adventure of death. The story touches all ages as we each face death because we are born. Death decides to take a vacation because for centuries he has been misunderstood. The earth begins to suffer without death and is overrun with all living matter. Earnest learns many lessons as death takes him on a journey "one of a kind". He begins to understand the body is the dress of the soul and death is not to be feared. Through a series of talks with death, Earnest begins to accept death as his friend and starts to lose his fear of the unknown. Death shows Earnest what happens to the earth when "he ceases to be". Earnest uses modern technology to twitter, blog and tweet to educate all the world on the necessity of death. With wit and wisdom our hero Earnest finds a way to get Death to go back to work and saves the world. 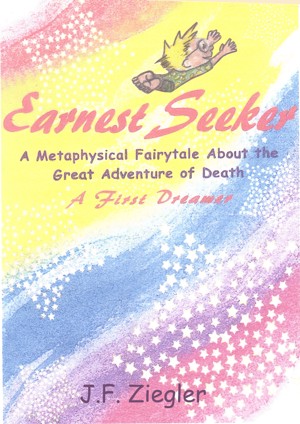 Earnest Seeker A Metaphysical Fairytale About the Great Adventure of Death by J. F. Ziegler
Price: $1.99 USD. Words: 1,910. Language: English. Published: March 23, 2013. Categories: Fiction » Children’s books » Social Issues / Death & Dying, Fiction » Inspirational
Earnest Seeker, is a tale told in rhyme about the great adventure of death. The story touches all ages. Death takes a vacation because he is so feared and misunderstood. The earth begins to suffer without death and is overrun with all living matter. Earnest learns death is needed and life is eternal; that the body is the dress of the soul. Our hero gets death back to work and saves our world.

You have subscribed to alerts for J. F. Ziegler.

You have been added to J. F. Ziegler's favorite list.

You can also sign-up to receive email notifications whenever J. F. Ziegler releases a new book.