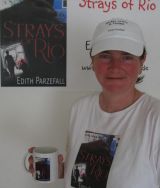 I studied literature and linguistics in Germany and the United States. After graduating with a PhD, I worked as a technical writer. Drawn to a more challenging career and increased opportunities for traveling, I moved on to management at a global IT company. Now a full-time writer and free-lance editor, I strive to combine my two passions: writing and traveling.

I'm supporting a street kids project in Recife, Brazil, and visited Grupo Ruas e Pracas where I took part in a music and crafts workshop with the children. During my stay in Rio de Janeiro, the idea for my thriller Strays of Rio was born.

And I'm co-author of the Higher Ground series. The first book, Wind Over Troubled Waters, has been released in April 2012 by Double Dragon Publishing. Next up: Knights in Dark Leather.

Where to find EdithParzefall online

You have subscribed to alerts for EdithParzefall.

You can also sign-up to receive email notifications whenever EdithParzefall releases a new book.