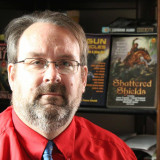 Hugo-nominated BRYAN THOMAS SCHMIDT is the national bestselling editor and author of ten novels and nineteen anthologies. His novels include The Saga of Davi Rhii, the first book of which received Honorable Mention on Barnes and Noble’s Year’s Best Science Fiction, the John Simon procedural thrillers, and Shortcut. His anthologies include Infinite Stars, Infinite Stars: Dark Frontiers, Aliens Vs. Predators: Ultimate Prey (with Jonathan Maberry), Predator: if It Bleeds, Infinite Stars, Monster Hunter Files (with Larry Correia), and Joe Ledger: Unstoppable (with Jonathan Maberry), and the forthcoming Robots Through the Ages (with Robert Silverberg). His short stories include official tie-ins to The X-Files, Predator, Aliens Vs. Predators, Monster Hunter International, Joe Ledger, and Decipher’s Wars, amongst others. He was first editor of Andy Weir’s international bestseller, The Martian, and books by New York Times Bestsellers Angie Fox, Todd McCaffrey, Mike Resnick, Frank Herbert, and many more. He has sold one novel to Hollywood and has authored over a dozen screenplays. He can be found online via his website at www.bryanthomasschmidt.net and on Twitter/Facebook as @BryanThomasS.

Where to find Bryan Schmidt online

You have subscribed to alerts for Bryan Schmidt.

You have been added to Bryan Schmidt's favorite list.

You can also sign-up to receive email notifications whenever Bryan Schmidt releases a new book.