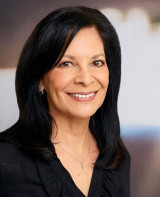 Elda is a native of Southern California. She was born in Glendale, lived in Lincoln Heights until the age of two, and was reared in Norwalk thereafter. She left the fold of her loving home at the age of 17. She attended Rio Hondo junior college, studied at the University of Copenhagen, Denmark, and graduated with a B.A. in Theatre Arts from Whittier College.

Elda has led a diverse life due to her exploratory nature in and out of the box. A sampling being: She's zip lined in Costa Rica, parasailed in Puerto Vallarta, skied the Austrian Alps, swam with stingrays in Moorea, and frolicked with dolphins in the Caymans. She worked in the entertainment industry for many years in various capacities. Her primary focus was acting (her first love). She has taught English in Japan and tutored Language Arts in the underserved communities within Orange and Los Angeles County. She has traveled domestically, as well as internationally, and plans to keep crawling around this fascinating planet. She has volunteered for a variety of causes, with an emphasis on children. Her joys are reading, dancing, music, reveling in humor and expanding her horizons externally and internally. She loves, loves, loves, flamenco! She currently lives in the Brentwood area of Los Angeles.

As an author she actively promote awareness, growth and personal accountability through her book, THE (IN)FIDELITY FACTOR: Points to Ponder Before You Cheat. Healthy people, create healthy relationships. She encourages you to be the change-up!

What's the story behind your latest book?
My book, THE (IN)FIDELITY FACTOR: Points to Ponder Before You Cheat was written because I became annoyed with all the incidents of infidelity being played out in the public eye. One high profile person after another was falling by the wayside with chaos trailing right behind. Enough already! I knew something more had to be done to address this issue. People cheat, move on, and possibly repeat the process without giving much thought to the turmoil left in the aftermath. Cheat, defeat, repeat--not good. Self-gratification and quick fixes are emotional knee jerk reactions that don't serve a constructive purpose.

It's apparent that infidelity is becoming normalized. Why? Why aren't we doing more to address this situation? This issue takes its toll emotionally and financially. Adults may become mentally distraught and require extensive counseling, which is a great way to deal with complex issues, but how about dealing with matters in a preventive, proactive manner? Children affected may act out through school failure, addiction, and promiscuity. Financial demise can be a by-product, which in turn puts a strain on our economic system: bankruptcy, government aid, etc. Not to mention intense madness and mayhem, dismemberment and death. All too real. There are many trickle-down disturbances that stem from the act of infidelity which impose on society at large, and guess what? We're all society at large!

I've been on both sides of the infidelity fence--not pretty. My experiences allow me to speak from a place of authenticity. I get it, and have learned a tremendous amount that I want to share. Infidelity is not one size fits all. There are many variable involved. I have to keep expanding my own preconceived notions and boundaries to accommodate all the stories in he city; they are never ending and aplenty. The information in my book is to prevent you from becoming another story. I emphasize the importance of self-awareness, personal accountability, and growth. The goal is to challenge the status quo and do some reeducating. And, hopefully, change up a law or two while I'm at it!
Read more of this interview. 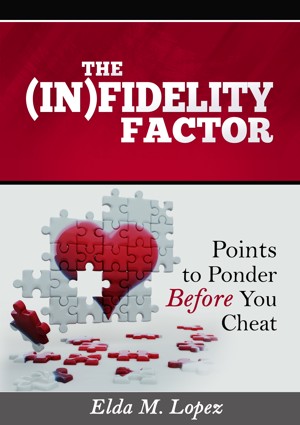 The (In)fidelity Factor: Points to Ponder Before You Cheat by Elda M. Lopez
Price: $2.99 $1.20 USD. (60% off!) Words: 31,940. Language: English. Published: February 4, 2013. Categories: Nonfiction » Relationships & Family » Conflict resolution, Nonfiction » Sex & Relationships  » Sex & culture
A much needed book for those with a desire to know and those in the throes of desire re:(in)fidelity in a committed relationship. It includes personal stories(incl. author's own), statistics, commentary and surveys for examination in an honest, easy, concise read that gets to the crux of the matter without bias or judgment. A book for everyone, no matter which side of the fence you find yourself!

You have subscribed to alerts for Elda M. Lopez.

You have been added to Elda M. Lopez's favorite list.

You can also sign-up to receive email notifications whenever Elda M. Lopez releases a new book.