When I was nineteen, I had grandiose ideas of lifting weights and having big muscles. I don’t know where I got the idea from, but I think I had it from very young. Too many Superman comics. I never did anything about it because I didn’t know what to do and because I never was a naturally athletic person. I was a bookish person who liked to read and maybe more an introvert than an extrovert, but I was guilty of wanting to be liked—maybe a little too much. Of course, nobody wants to be hated. But I saw people who, it seemed to me, were very likeable, and I did not feel liked. I felt ignored. Especially by girls that I (secretly) liked.
So when I read Arnold’s book, The Education of a Bodybuilder, at the age of 19 after first year university, it seemed that the man in these pages was the full embodiment of everything that I had ever wanted to be: big and muscular. If I could be like him, my life would take off.

I started lifted weights and I made some—I would say—Permanent Hypertrophy gains in my musculature. By permanent, I mean permanent physiological changes in the shape and lines of my muscles that never seemed to “go away” even when I stopped lifting weights periodically. My friends started to notice and it made me hungry to make more gains. At 23, the gains seemed to me to stop.

I did not know anything about steroids at all.

When I was 23, at the end of fifth year university, I fell off a ladder while painting. I was taken to the hospital because I was unable to move, and they had to X-ray me. Nothing was broken, but to my surprise, the doctor informed me that my blood pressure was high and I should have it checked out.

I thought he was mistaken, but when I had recovered and visited the doctor next, the doctor indeed said to me, “Sure enough. Why does a young guy like you have high blood pressure?” That was at 23. He didn’t know so how could I? The pressure was called primary “idiopathic” hypertension and it was 140/90 mm; this is mild or borderline hypertensive. Not dangerous, but something that needs attention. I took pills on and off for it till I would get sick of taking pills and then I would refuse to take them anymore till the next time I had cause to visit the doctor. Again, I would discover that “my pressure was stubbornly and mildly still high”.
When I was 28 years old, I decided to experiment with my diet. I did this for two reasons: 1) to try to force my muscles to make more (permanent) gains and 2) to make the high blood pressure go down since I had got it in my head that maybe the high blood pressure was there because I was “slightly energy defunct”. I ate five filling meals (more carbohydrates) like Arnold had done in his book, which I had read about but never really done before. I also ate more protein in the form of tuna fish from a can, which I washed out to get rid of the salt.

The result: no new (permanent) gains, but my muscles started feeling bulgy and more “pump-able”. A very powerful, manly feeling. I loved it! I still did not make any permanent gain in my musculature, but I felt like I was on the threshold of making gains, even though I never did. But my muscles felt so amazing—so much fuller, more like “bulgy pillows”. They never felt like that before. I believe that this happened—both then and subsequently afterwards when I repeated this experiment many times later with the same disastrous results (as you are about to read)—because there was more glycogen built inside the muscle. My muscles were more ‘stacked’ or full of glycogen than before: that is why they felt like this. In my book, I refer to this as Temporary Hypertrophy.
But I had another more serious problem. My blood pressure did not go down; it went up! To 160/100! Also, I was feeling very unwell, like I would fall over. Un-wellness took the form of: depression, tiredness, heavy eyes (felt sleepy all the time), anxiety, heart palpitations, a distracted mental fuzziness, and a permanently queasy stomach. I could not continue living like this, although I tried to “hold on” to the bulgy muscles, but I had to let go. I didn’t want to let go of my muscles feeling like this, but I had no choice.
The one time that I managed to make it to the doctor for a blood test; he said that I was “normal”. I realized that I could not tell him what I was trying to do: medicine tells you to live and eat moderate and I just did not want to hear—what I thought of as—“mediocre advice”. Do you think Arnold would have wanted to hear that when he was young?

I don’t have a provable answer (yet) for you as to why this happens to me, but I have a theory I want to share with you. It is this: Arnold Schwarzenegger has an ideal cellular metabolism to lift weights with; I do not. Mine is more inferior to his. (And I lack his potential too.)

The pair of glasses is called Metabolic Typing. It is someone else’s idea or hypothesis about cellular metabolism—not mine. I am borrowing it and applying it to bodybuilding.

Here are my final five thoughts about this and why you should read my book.

1) If I did not believe that what I am saying is true, I would never have written this book to waste anyone’s time.
2) If some of you are like me—if you too have a Fast-Oxidizer cellular metabolism like me—then you will experience the same symptoms and issues that I had when you lift weights to bodybuild and eat a high carbohydrate, high protein diet to try and grow your muscles. Your body’s metabolism will push back on you—hard.
3) The high blood pressure was the result of my metabolism rejecting the growth of my muscles. The bigger my muscles got from both the diet and the lifting weights put together, the more my stress level grew. As you make your muscles bigger, your Stress metabolic level will increase. Since Arnold and all the professional bodybuilders are successful, it means that their metabolisms must be very resistant to the growth of Stress metabolism, even though it is still happening in their case.
4) More than one doctor told me that bodybuilders have a higher-than-can-be-explained-by-chance level of high blood pressure and I would like to show you one possible cause of this from my perspective.
5) When you have problems like me, Arnold will not be able to help you. He is a Slow-Oxidizer and will never have a visceral knowledge of this issue like I do.

Come to me if you want to understand this problem. Only on Smashwords!

Where did you grow up, and how did this influence your writing?
I grew up in Toronto. I would say in grade two I learned to read by myself, and I did not have the problems that I saw others kid when reading. Some kids were challenged by reading. They put rulers down under the line to read. I was reading Mr. Mugs. I loved to read. When I was in high school/grade 9, I would go to a library near the school and I would read all the science fiction short stories books that I could check out of that library. Science Fiction Nebula short stories. All kind of beautiful science fiction short stories that only I can seem to remember now and that only exist up inside the attic of my memories. They were so amazing. I did not grow up dreaming that I would want to be a writer, but I think the adage 'readers are leaders' can be true to help you to write and express what is in your heart and soul and what you are burning to share with others.
When did you first start writing?
I started making a diary every time I went to Florida with my parents. I should say journal, not diary. We would go to Florida (Daytona Beach) every year and I would be the family documenter of what we did and where we went in those journals. I put my feelings and emotions in those journals. I swore in those journals. I saw that the journals could be powerful emotional outlets because I could release the storms inside my soul inside those journals and in some way release the inner pressure that my emotions were bringing to bear on myself from consuming me. My parents never read those journals and so they became a private safe for me to hide away the secret writings that were for my eyes only.
Read more of this interview. 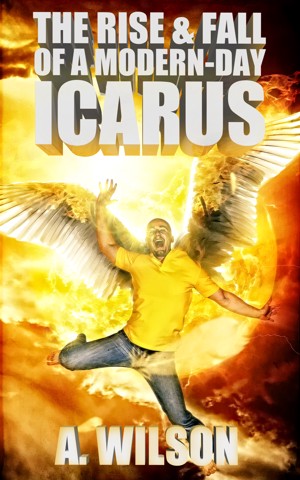 You have subscribed to alerts for A Wilson.

You have been added to A Wilson's favorite list.

You can also sign-up to receive email notifications whenever A Wilson releases a new book.