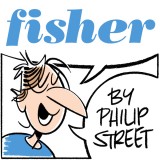 The Fisher comic strip started publication on June 24, 1992, in The Globe and Mail. (A tip of the hat here to Warren Clements, the Globe editor who took it on.) At first Fisher appeared four times a week, sharing the space with Warren's own Nestlings strip. In the fall of 1993 Fisher went to six days a week, and by the time it wound up its run in the newpaper in September of 2012, over 6000 strips had been published. For most of that time the strip was in black-and-white, but when the Globe went all-colour in October of 2010 the comics page followed suit.

As the strip begins, Tom Fisher is rather overeducated and certainly unemployed. In his mid-twenties, he has come to ground and is living with his parents... until he decides to move back to Toronto to try his fortune again. (The archive does not yet go back all the way to the beginning, but I intend to remedy that eventually.) He joins a co-op household and looks for work — and for love. The evolution of the story from there has had many developments and a few dead ends. I hope you enjoy it.

A disclaimer: Although it's true that the character of Tom is something of an alter ego for me, and that I draw inspiration from things that have happened to me and to other people, the strip is not even close to being autobiographical. Except sometimes.

Where to find Philip Street online 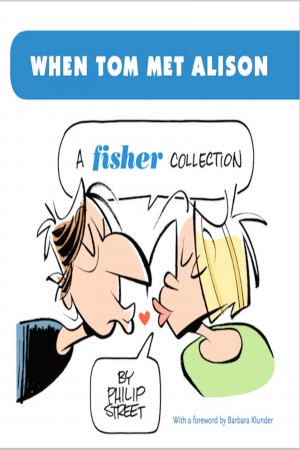 When Tom met Alison - A Fisher Collection by Philip Street
Price: $7.99 USD. Words: 1,200. Language: English. Published: August 17, 2016. Categories: Fiction » Graphic novels & comics » Comics, Fiction » Graphic novels & comics » General
The comic strip Fisher first appeared in The Globe and Mail, more than twenty years ago.The 300-plus strips in this compilation carry Tom and Alison from their first meeting through their lovers’ quarrels to their—but no, that would be telling. Suffice to say you may recognize yourself, your friends, your co-workers and the love of your life.

You have subscribed to alerts for Philip Street.

You have been added to Philip Street's favorite list.

You can also sign-up to receive email notifications whenever Philip Street releases a new book.